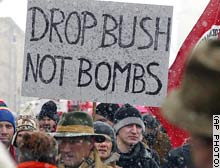 Call it the "cover your ass" vote. Only three House Democrats have voted to support the resolution calling for the immediate withdrawal of troops from Iraq, a measure which Rep. John Murtha (D-PA) controversially called for Thursday. Falling into the Republicans' crafty trap to force them to go on record in support of the war, the Democrats failed to back Murtha, who put his admirable bi-partisan hawkish reputation on the line (finally, a politician who's not afraid to speak the truth), for fear that doing so will hurt their re-election chances next year.

This is going to backfire. House Democrats are now chained to this quagmire right alongside the Bushies, which is exactly what the GOP wanted. Once again, the left's been outmaneuvered by the right. Until this stops, until we stop being so politically calculating, until the Dem's grow some balls--and I'm not talking momentary tough-guy talk by Harry Reid and Chuck Schumer--we're going to be running uphill come election time. What do we stand for? When will we speak up for these beliefs like Murtha did? Why can't our party speak up for the majority of Americans who oppose and want out of this war?

I think the left made a very, very big mistake tonight.
Posted by The Ostroy Report at 11:13 PM

I'm glad the Dems voted against it. The resolution was written by Hunter, not Murtha and simply put, was a ploy to split the Dems. Instead it backfired.

Boy, that was unfair. I agree, anonymous:

Split the Dems? What are you talking about? All it's done to serve is force the Dem's hand into sticking it out right along side Bush. How will the Democrats now be able to say it's time to bring the troops home when they're on Congressional record of voting not to withdraw? How can they go back to their constituents--most of whom want the troops home--and expect their support? For crap's sake, people, Murtha's a damned hero and the only one with balls up there. Had the others stood by him and voted to pull the troops, they'd be standing up for something that most of America believes in. Instead, we're right alongside the Republicans, kissing up as always. I hate it. Makes me sick. We don't deserve to win next year if we keep this up...and we won't.
a

They can believe the polls--they're whipped, they're afraid to stand with their base, and they are going to be challenged in the primaries. I'll stick with a fighter all the way.

You seem to believe the Republican thinking that Americans are stupid. I'm quite confident that the majority of Americans...the ones who want us out sooner than later, saw through the thinly veiled hypocrisy inherent in this GOP prank.

I know I do, and I'm nothing special.

Why do you take Americans for fools?

Murtha voted against this resolution guys, and it's a good thing the Democrats did too. It was craven politics at it's best, at it's worst it was a transparent stunt designed split the party, that failed. Murtha doesn't want to immediately withdraw the troops, and neither do most Americans.

The affect of the Murtha proposal has been for the Iraqi Government, and Condi Rice to start talking about troop withdrawals, which is a 180 degree turn from the administration policy of a week ago. The affect of Harry Reid's tough talk is a Senate that expects regular reports from the Administration on the conduct of the war. That might not seem like a whole lot, but considering its never been asked before, its a major step forward.

The Democrats are forcing the agenda on this war. It is obvious to anyone who sees the signs that "staying the course" is no longer the policy. Try being a little patient.

This is the first comment on the Hunter nonbinding resolution that matches the response I had as I watched the Friday night House-floor food fight. I kept watching, anticipating the Democrats would not fall for the blatantly disingenuous trap the Repubs were setting for the Democrats. The Dems were too savvy. They wouldn't fall for this trap which would get the Dems to vote alongside the Repubs and thus allow Bush & Co to proclaim 100% support of the House for his "Stay the Course" in Iraq. It was too obvious. What happened, Dems?

If only you had abstained from voting "No" or merely voted "Present," then the focus would have been on the sleazeball Repubs when they voted down their own resolution---all by themselves! Wouldn't that be something for them to crow about!

Instead, the Dem lemmings went right off the Republican cliff...en masse..and Bush-spokesman Scott McClellan immediately proclaimed that the full House was behind Bush on staying the course-- thus splitting the Dems from John Murtha and his courageous stance on getting out of Iraq "as soon as possible." And in the process, the Dem's set themselves up for being charged with "flip-flopping" when / if they do eventually come out and support Murtha. The American people are definitely way out in front of Congress on this matter, just as Rep. Murtha said. Get a grip, Dems--and while you're at it, get a brain...or at least a good political strategy advisor.