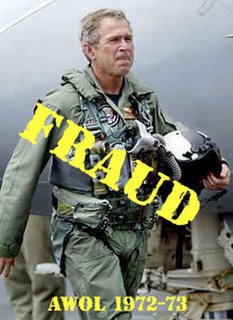 There's this myth that's been perpetuated for years in conservative Washington and among the right wing press that the Republican Party is the party of strong, courageous, heroic defenders of America, while the Democrats are namby-pamby sissy-boys that cannot and should not be entrusted with the nation's security. How and when this started--although I'll give much of the credit to Karl Rove--I'm not exactly sure. But a simple look into the military service, or lack thereof, of prominent politicians and spin monkeys offers a not so surprising revelation into who the real tough guys are in Washington:

Many of these conservatives did everything in their power--including using their family's wealth and political connections--to avoid military service. No wonder then that they over-compensate for this lack of bravery by attempting to tear down the real heroes at every turn.

Entrust our security to these jokers? Puhleeeeze. I'll jump in a trench with Kerry, Cleland, Kennedy, Daschle and Gore any day of the week over Bush, Cheney, DeLay, Frist and Limbaugh. At least our guys don't have to play dress up.
Posted by The Ostroy Report at 12:23 PM

Andy, this is great post!!! Thanks for taking the time to do the research and show these gutless WARMONGERING chickenhawks for what they are.

I ditto Joe. I like everyone else in this country support our troops, that never needs to be questioned even if you're totally against this invasion.

I'm not famous or a politician but I'm proud to say I served my country on board a Navy destroyer from 1960 to 1964 and have a metal for serving during the Cuban blockade in October of 1962. No big deal but I did my time so I can bitch about this president.

Found you via Priscilla at libpolrel.blogspot.com

The biggest hawk I ever knew was a guy with a harelip (surgically corrected). He would say, 'I'd be enlisting in a minute, but they'd never take me...' No such excuse for his hawk brothers either - they'd probably use the gay marriage defense: 'If they won't take someone I love, I'm out, too!'

I have this linked on the Republican Criminals blog...

For more on the repug chickenhawks and their lame excuses read
http://www.nhgazette.com/news/chickenhawks/
The NH Gazette is the nation's oldest newspaper and well worth a read.

Thanks Joe, I may print out for my fat head brother-in-law (Nat'l Guard helicopter pilot no active duty) who's coming over on Thanksgiving.

Gee republicans are cowards one and all, go figure. Easy to send others to fight for you, after all they have no idea what it is all about.

Read the description of "pilonidal cyst" at http://www.emedicinehealth.com/articles/20243-1.asp and tell me if Rush wasn't classified 4F because of a pimple on his ass.

Yeah..gutless wonders like these are always the first ones to wave the flag, call for war, and question anyone patriotism that questions their motivations. The ones that really burn my butt are the Young Republicans. They are behind the Chimp and his neo Con ambitions 100% as long it is some poor kid from Tenn. that is doing the fighting and dieing and not there coddled gutless keesters. Kinda like the Chicken hawks over at REDSTATE.ORG.


Ken Melman: did not serve, gay.

Nice post. Of course it would take a War and Peace sized volume to list them all.

There is one major player missing though. One who folks on the left side of the isle always leave off these kinds of lists for some reason.

I'm talking about the guy who funded the right with billions of dollars swindled from the Japanese. The guy who guided the right with his front groups. The one who funded Rove's old competitor and father of the attack ad, Terry Dolan, with several hundred thousand years ago when the 'new' right was being formed. The one who bailed out Jerry Falwell, funded LaHaye's efforts and kept afloat the likes of Richard Viguerie. The guy who said his job as messiah was to, as his operative stated, raise up the Chritian "right" for power in America and he outspent Scaife doing just that.

In short, the guy who molded the right as he funded and guided their takeover of our government, he did NOT serve.

Oooops, I forgot, he isn't even a citizen.

One noticeable omission from your list is Pat Robertson. He not only avoided the draft using family connections (his father was a U.S. Senator), but he openly bragged about it.

The Chickenhawk Law: The fervor in which you support aggressive US military action is inverse to the amount of time you or your children spent or will spend, in US Ground Forces.

Perfect law to enact when the Dems take back the Congress in '06...that is after impeachment proceedings have begun.

Excellent post. I think I might re-print it so as many people as possible will see it. This has to get out into the media more.

This is great information, but we can send this all day long to all the major media heads and it wouldn't get a lick of air time. This information was easy enough to find and post here - so anyone can get it.

It won't mean a thing. I'd pass this on to my father-in-law who did serve and is a retired Lt Col in the Air Force, but he's so fcked up as a Republican-lover that he never thinks anything this administration does is wrong. He likes to play the "I know classified information" - well I think we all know it now Pops!!

Congressman Murtha said, “I like guys who’ve never even been there, that criticize us who’ve been there. I like that. I like guys who got five deferments, have never been there, and send people to war and then don’t like to hear suggestions about what needs to be done.”

To all the regulars...Where is All_I_Can_Stands on this one? Hmmmm? Guess Stands has no comment for the truth surrounding the GOP liars on this bit of information.

I copied this off and showed it to family members who all came to the same conclusion... What a bunch of sh**heads in elephant costumes!

If disrepecting those that have served is their only tactic, they are one sorry-a** bunch of hypocrites!

The truth will set you free. This list is the same as over 100 other left-wing web-site. Your just vomiting up the same lists like mind-numb facists. You forgot to mention your democRAT icon Bill (Monica blew me) Clinton forged paerwork to get his deferment. Al Gore used his fathers (the tobacoo-growing, segregationist) to get out of Viet Nam after only serving 141 days and spent all that time a safe little office. Tom Harkin lied about his where he served. Your breck-girl John Edwards DID NOT SERVE. MICHAEL MOORE DID NOT SERVE. Dick Gephardt was deferred (like Chaney. Finally you idiots, if military service is a must to lead this great nation, then shut up about Hillery in '08. The only combat she has ever seen is kicking Bill's ass for being a cheater and abusing the White House staff. signed Anonymous 21 year vet who doesn't want some of your union goons threatening my family.

You can bet all the left-wing socialitas jumping in to the fox hole with their "leaders" will make sure that hole is miles away from any real danger. Cut-and-run for personal- elitist power.