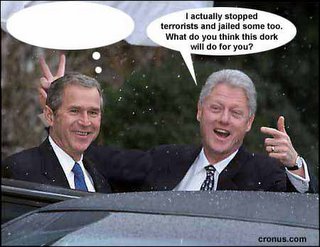 David Brooks' Op-ed piece in Today's NY Times is so absurd and misguided that the only way we could adequately address it was to parody it......

David Brooks sits alone at his kitchen table at 4 am.
Posted by The Ostroy Report at 7:37 AM

Andy - once again, as always, you hit the nail on the head. Luv ya' bro! I always appreciate your impeccable use of sarcasm to make a point - and to make it WELL! I think we all know by now that the Bush administration and the idiotic conservative facists that continue to support the SOB have nothing else to stand on than to blame the democrats for every problem facing the country today. The one thing I have learned about the right wing idiots is that they HAVE NEVER and WILL NEVER, EVER accept responsibility for themselves or any of the incomprehensible and unfathomable things they do. They know nothing more than to always place the blame on someone else. What is reassuring, however, is that they are only fooling themselves. I still find it hard to believe that many moons ago, I swung more to the right than to the left. Thankfully I grew up and matured (and got a brain) and am now a proud, loud, shout it from the rooftops LIBERAL DEMOCRAT and damn proud of it and I miss Bill Clinton incredibly - and I miss all the wonderful things he did for this country - which are now nothing more than a distant memory - thanks to this self-absorbed, arrogant, useless, dispicable, good-for-nothing waste of humanity who carrys the title of "president" but in no way represents anything that I stand for or believe in. Well Georgey...you mean nothing to me - and you can hide behind the Clinton administration all you like - it doesn't change the fact that you are a pigheaded moron and a disgrace to this country and to the world. I hope you're proud of yourself. Andy - thank you for always sharing the truth - no matter how harsh. It is always appreciated - and refreshing in these troubling times.

Andy, it is interesting that liberals
1) Chafe against the GOP blaming anything on Clinton's past presidency
2) Have made it very clear that they intend to blame Bush for every problem that exists after his presidency

Liberals love to play by their rules and have it BOTH ways (as I have said many times). But liberals have the right to express themselves in this way. Just don't demand credibility in the process.

Hey what can you say? These neocons are a bunch of morons who want America's clock turned back to the 19th Century. They have no good foundation to start with and no future except the death of Democracy. The very idea that they deplore the Constituion say's volumes as to their purpose for the rest of us. They will fight tooth and nail to keep their illicite profits and keep the coruption going as long as possible.

Funny how the surplus that Bill Clinton brought about is now gone, Clinton's fault. Family leave act enacted and finally gives loved ones time to help their loved ones, damn Clinton. Finally a president that cared about the environment and set aside land to be enjoyed by future generations, yup Clinton's fault again. Yeah, the list goes on and on about those 8 years of growth, prosperity and freedom from wars but who wants those times when we can have these wonderful Bush years of defect, wars and corruption.

Jimmy Carter put it best last evening on his interview with Chris Matthews. Chris asked him if there was a difference between Republicans and Democrats and his answer was Republicans like wars and Democrats like to negotiate. How true that is and when asked if Bush had been in office in 1962 for the Cuban problems Jimmy said he believed it would have been war, I have to agree.

I read all these Republicans on here cutting the Democrats, but to this date they can never list the wonderful things Bush has done since 2000 to help the average person in this country. I guess it's simple NOTHING!

Have you had enough YET!

Bobby Xanadu said...
This comment has been removed by a blog administrator.
3:26 PM

I still deeply believe that Clinton just blew everybody's mind because he wasn't a blue-blood. We don't want no trailor trash in the WH!! And Monica be damned, he remained popular and beloved even as he was forced to reveal his private life (yeah, he lied about it----wouldn't you?) and ultimately be humiliated by a bunch of dessicated guys who couldn't get a blow job unless they paid for it. He left us with a strong, fiscally sound nation and continues to function as a statesman and brilliant human being. And, just for the record, that funny swishing sound you hear whenever Mr. Bill walks into a room full of women, that's 300 pairs of panties hitting the floor.