The List of Bush and Cheney's WMD & Iraq Lies 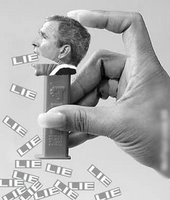 With his approval rating an anemic 35% and a majority of Americans believing he misled the nation in his rush to war with Iraq, President Bush, propped up by a re-energized Karl Rove, is blasting Democrats for their "baseless attacks" amid charges that his administration misused pre-war intelligence. With the familiar swagger reminiscent of his 2004 campaign days, Bush came out swinging at a Veteran's Day speech at an army base in Tobyhanna, Pa, blaming Democrats for undermining the war effort. Yet the president consistently chooses to ignore his and VP Dick Cheney's lengthy trail of lies and deception which support the left's accusations.

Despite the obvious--that the war has been a colossal failure and that the country, according to every major poll, believes he was duplicitous in his march to Baghdad--Bush still believes the best path to political resurgence is to blame others and maintain that the pre-war planning was judicious; that the invasion was justified; and that significant progress is being made. I'm not sure what's worse: if he actually believes his own rhetoric and is thus delusional, or if he's blatantly lying.

On the central charge of whether Bush and his administration lied about the need to go to war, about WMD, and if they twisted and manipulated pre-war intelligence, we only need look at the statements made by Bush and VP Dick Cheney in the months, weeks and days leading up to the invasion. It paints a clear picture of a calculated campaign to mislead the nation.

Let's start with the president's statements:

To the United Nations, Sept. 12, 2002: "Right now, Iraq is expanding and improving facilities that were used for the production of biological weapons."

Radio Address, Oct. 5, 2002: "Iraq has stockpiled biological and chemical weapons, and is rebuilding the facilities used to make more of those weapons. We have sources that tell us that Saddam Hussein recently authorized Iraqi field commanders to use chemical weapons -- the very weapons the dictator tells us he does not have."

Cincinnati, Ohio Speech, Oct. 7, 2002: "The Iraqi regime... possesses and produces chemical and biological weapons. It is seeking nuclear weapons. We know that the regime has produced thousands of tons of chemical agents, including mustard gas, sarin nerve gas, VX nerve gas....The evidence indicates that Iraq is reconstituting its nuclear weapons program. Iraq has attempted to purchase high-strength aluminum tubes and other equipment needed for gas centrifuges, which are used to enrich uranium for nuclear weapons....The Iraqi dictator must not be permitted to threaten America and the world with horrible poisons and diseases and gases and atomic weapons....We've learned that Iraq has trained al-Qaeda members in bomb-making and poisons and deadly gases ... Alliance with terrorists could allow the Iraqi regime to attack America without leaving any fingerprints."

State of the Union Address, Jan. 28, 3003: "The British government has learned that Saddam Hussein recently sought significant quantities of uranium from Africa." (the infamous "16 words" Bush chose to speak despite the fact he knew for a year that they weren't true. Fmr. Ambassador Joseph Wilson, after a CIA-sponsored Feb. 2002 trip to Niger to investigate the allegation, reported finding no such uranium connection between Saddam and Africa).

State of the Union Address, Jan. 28, 2003: "Our intelligence officials estimate that Saddam Hussein had the materials to produce as much as 500 tons of sarin, mustard and VX nerve agent."

Address to the Nation, March 17, 2003: "Intelligence gathered by this and other governments leaves no doubt that the Iraq regime continues to possess and conceal some of the most lethal weapons ever devised."

Remarks made in Poland, June 1, 2003: "Yes, we found a biological laboratory in Iraq which the UN prohibited."

The vice president was just as deceptive when describing Saddam's WMD build-up on NBC's Meet the Press March 16, 2003: "We know that based on intelligence that he has been very, very good at hiding these kinds of efforts. He's had years to get good at it and we know he has been absolutely devoted to trying to acquire nuclear weapons. And we believe he has, in fact, reconstituted nuclear weapons."

And Cheney's lies get even bolder. In '01, discussing the alleged connection between 9-11 and Saddam, Cheney said of highjack leader Mohammed Atta on the Meet The Press: "It's been pretty well confirmed that he did go to Prague and he did meet with a senior official of the Iraqi intelligence service in Czechoslovakia last April. "

Bush also roped Secretary of State Colin Powell into the act. Powell, on Feb. 5, 2003, presented a very compelling case for war before the U.N. Security Council: "Our conservative estimate is that Iraq today has a stockpile of between 100 and 500 tons of chemical weapons agent. That is enough to fill 16,000 battlefield rockets."

And who can forget the incredulously over-confident declaration made on March 30, 2003 by Defense Secretary Donald Rumsfeld: "We know where [Iraq's WMD] are. They're in the area around Tikrit and Baghdad and east, west, south, and north somewhat."

Now, 2 1/2 years and 2000 dead U.S. soldiers later, rather than accept responsibility and offer a mea culpa as so many presidents before him have done in the face of failure, Bush's strategy is to keep lying and shifting blame even though evidence such as Britain's Downing Street Memo proves that the Bushies manipulated intelligence to support its case for war.

"The stakes in the global war on terror are too high, and the national interest is too important, for politicians to throw out false charges," Bush said. "These baseless attacks send the wrong signal to our troops and to an enemy that is questioning America's will. As our troops fight a ruthless enemy determined to destroy our way of life, they deserve to know that their elected leaders who voted to send them to war continue to stand behind them."

Sorry George, you don't get to lie to Congress and then attack lawmakers as unpatriotic once the lies are eventually exposed and they subsequently oppose your unjust war. The failure of this war rests squarely on your shoulders and your over-zealous, war-mongering cabinet, not the Democrats, the media or anyone else.

The other GOP talking point being regurgitated ad infinitum is that 'everyone including the Clinton administration, our European allies and the U.N. believed Saddam had WMD.' True. But the key difference here is that none of them believed the intelligence was actionable. Which is why they chose not to go to war. Only someone with the supreme arrogance of President Bush would attempt to blame his irresponsibility and poor judgment on the responsibility and good judgment of others.
Posted by The Ostroy Report at 10:02 PM

Andy, what if it's neither that he is delusional nor is lying? What if, from his (and Cheney's, and Wolfowitz's, and Perle's and others like them) perspective, it doesn't matter whether we beleive they lied or are crazy, or whether they are arrogant, or had poor judgement or are war-mongering? What if it's the very presence of our military in Iraq and a long-term goal of keeping that presence there that matters to them? What if these men simply don't care about all of the rest of us arguing about who is crazy, delusional, lying or who should be impeached or not? What if their agenda is so clear to them, that whatever they are accused of is beside the point and utterly irrelevant? What if they simply don't care that we will wage a war of attrition over decades, not really caring whether Iraq evolves into a democracy or devolves into a theocracy? What if the strategic presence of our troops, eventually concentrated in enclaves of smaller numbers, throughout Iraq, of a half-dozen or so tactically located bases is the point after all?

It is inevitable that someone is going to develop that oil, some time, into something resembling a significant world supply (it has the potential to exceed Saudi Arabian volume). And isn't our military presence the fail-safe guarantee of an unimpeded distribution channel to American capital, through the American oil industry?

Perhaps we will all flail away for the next three years, talking of impeachment, perhaps electing a Democratic Senate in 2006, perhaps a Democratic President in 2008, but, in the end, this new leadership will, in all probability, recognize the ultimate "good" of our strategic presence in Iraq, in spite of whatever calumny led us there. They will, to be sure, go through all sorts of hoop-jumping, apologia, and prevaricating spin, but they will preserve the fait accompli created by Bush's War, recognizing a facts-on-the-ground necessity that benefits America much more than hurts it.

I opposed the war from the outset because I saw it as a capitalist enterprise, not delusion, not arrogance. I opposed it because it is a conscious imperial choice made by oilmen and their corporate allies who are protecting their interests.

To explain away the Bush Iraq agenda as arrogant or delusional or a matter of poor judgement weakens our understanding of these men and what they are about.

Joe Smoe: American Citizen said...
This comment has been removed by a blog administrator.
5:08 PM

What I want to know is where the hell is the accountability??? I've said it before and I'll say it again, out here in the real world if you screw up big or lie and this error or lie costs money and lives you either lose your job, get sued, or go to jail or maybe all. If Iraq was a mistake who is being held accountable and taking the bullet? The answer: in the world of Bush if you lie or screw up you get a medal or a promotion.


I don't care what any party says, to pull out now would destabilize the middle east, just look at what happened in Jordan last week even with us there? Both parties know this. This will turn into what all wars turn into "Rich man’s war Poor man’s fight" with the Corporations and Politicians reaping the rewards of the conflict while Joe Six-pack pays the price in the end through Blood (death and Maiming) and Treasure (higher Taxes).

I agree with joe smoe, Re: accountability

"Katrina exposed serious problems in our response capability at all levels of government and to the extent the federal government didn't fully do its job right, I take responsibility."

What does it mean to say you "take responsibility"? What tangible act accompanies that? When Bush said he takes responsibility, he was saying he was at fault for "serious problems" and for not doing his job. Joe's right, people lose their jobs for that.

Once again... thank you Mr. President

Most people have NO IDEA who these senators even are or even heard what they said on the Sunday news shows or talk tv to begin with.

It was bush the American People were LISTENING TO and no one else. end of story.