Is Bush Set to Do an About-Face on His Misguided "Stay the Course" Policy By Withdrawing Troops In Time For '06 Midterms? 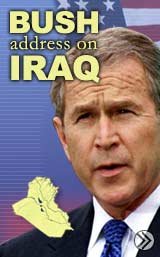 With political pressure mounting on President Bush from both Democrats and Republicans to create a viable and imminent exit strategy for the troops in Iraq, the key question is if the withdrawal will coincide with next year's midterm elections, and if so, will the Bushies and the GOP be reversing course, selling out Iraq in the process.

The latest Harris Poll reports that 63 percent of Americans want most of the troops home within the next year. A majority also no longer trust Bush, and believe the administration misused intelligence to make its case for war. With Bush's and Cheney's approval ratings at 35% and 28% respectively, none of this bodes well for Republican incumbents seeking re-election next November.

But where exactly does that leave Bush's repeated promise to "stay the course?" As the New York Times reports Monday, the Bushies are quietly reacting to the growing unpopularity of the war by privately laying the groundwork for an '06 draw-down. Administration and Pentagon officials have plans in place to reduce to under 100,000 by next Spring the amount of troops in the region. But simultaneous contingency plans also call for a possible speedier withdrawal to meet the demands of the new Iraqi government, as well as for a possible increase in troop strength should the insurgency gain momentum.

Many in Washington suspect that the Bushies will cave under the increasing political pressure, compromise its goal of fighting "until the mission is completed," and prematurely withdraw the troops. Many prominent lawmakers on both sides of the aisle including Sen. John Murtha (D-PA), Sen. Carl Levin (D-MI), Sen. Joe Biden (D-DE) and Sen. Richard Lugar (D-IN) have been highly critical of the war and Bush's lack of an exit strategy, and have turned the screws, demanding such a plan. Whether or not Bush can stave off the pressure and stick to his original--albeit misguided and delusional--indefinite timetable or whether GOP survival-politics will win out remains to be seen. But if the recent week or two is any indication of which way the White House wind will blow, the easy money is on a Bush about-face.

The set-up will continue this Wednesday, when Bush will speak in Annapolis, MD about the military "progress" in Iraq and the ongoing war on terrorism. What we're sure to get then, and in the days, weeks and months to come, is more of the same lies and deception from the president and VP Cheney. All in the name of justifying what is soon to be their policy reversal regarding troop withdrawal.
Posted by The Ostroy Report at 7:28 PM

"Stay the Course. The course is going over a cliff". See 60 minutes interview with General Zinni -Bushs Mid-East envoy-. those are HIS words. stay the course... what a disaster of a plan.

I have this sneaking suspicion that the Iraqi government will ask our troops to leave in 2006 ... giving Bush his out. If so, I wonder how much the White House would have influenced that Iraqi decision.

This war is merely a reflection of this Administration...a disaster for Iraq and for America.

What progress are we making in Iraq exactly?
One step forward, and two steps back?
If Bush weren't such an idiot, he'd see that for himself. It's as plain to me as that ugly nose that's on his face.

Of coarse they will begin pulling a token force back from Iraq before the 2006 elections. That is totally clear. The yahoo now is mearly setting the stage for that election dance in an effort to maintain power. Troops will be pulled from Afganistan, the deal is already cut with the Brits to replace them via NATO, and shifted to iraq. In the end the American presence will most likely be even larger. Pull out 1 send in 2 will be the game.