It's Thanksgiving Week, and Time to Thank President Bush For All He's Done For America 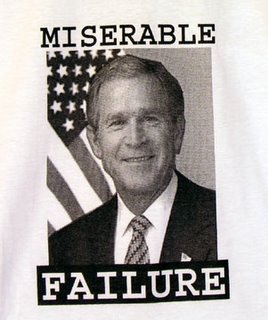 What would Thanksgiving be without acknowledging the monumental accomplishments of President Bush, and to show our appreciation for all he's done to help tarnish America's great reputation and make our nation a most difficult place in which to live in 2005. So, without further adieu:

Thank you President Bush for:

-Allowing Osama bin Laden to remain free;
-Squandering America's post-911 currency;
-Lying about WMD, mushroom clouds, Uranium in Niger, and our need to invade Iraq;
-Lying about Saddam's Al Qaeda connection;
-Sending thousands of our men and women to die in an unjust war;
-Not adequately arming these brave soldiers;
-Alienating the U.S. from its most trusted allies;
-Turning the entire world against us;
-Firing Gen. Shinseki, who said we didn't have enough troops to fight the war;
-Not firing Donald Rumsfeld, whose strategy Shinseki proved wrong;
-Turning Iraq into a terrorist breeding ground;
-Lying about how you won't nation build;
-Opposing the 911 commission and the Dept. of Homeland Security;
-The torture and human rights abuses at Abu Ghraib and Guantanamo;
-Lining the pockets of Halliburton with fat no-bid contracts;
-Ignoring the nuclear build-up in Iran and N. Korea;
-Blowing off the Kyoto Treaty
-Lying about Social Security's insolvency;
-The huge tax cuts for the wealthiest 1% of America;
-Lying about the true cost of the health care bill;
-Being a real divider not a uniter;
-Stellar appointments like Michael "Brownie" Brown, Harriet Miers and other cronies;
-The record gas and oil prices;
-The largest debt in U.S. history;
-Failing miserably in the Hurricane Katrina rescue and relief effort;
-Fostering the most blatant culture of corruption in U.S. history;

Yes, thank you George for being such a wonderful president.
Posted by The Ostroy Report at 9:03 PM

And thanks also for:
Arsenic in the water
Saying that outsourcing is good
Mangling the language
Poverty up every year
Cutting farm benefits,food stamps,Medicaid,school lunches,and student loans
Reviving the Democrats
Letting 9/11 happen

He claimed to be a uniter, and unfortunatly he has united most of the world against the US.
Thanks a bunch!

This is not a hoax. Google "failure", click I'm Feeing Lucky. Aint the democracy of cyberspace grand?

and I especially want to give a big hand to those people in Florida who stole the first election and the people in Ohio who laid down for the next episode.