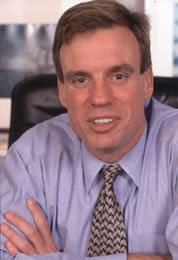 If it were a movie it could be called "A Southern Star is Born." The most significant thing to happen following Tuesday's elections was the sudden emergence of what many excited Democrats are calling their new 2008 presidential frontrunner, a guy who just happens to be leaving office, not running for it. Departing Virginia Gov. Mark Warner, with an astounding 75% approval rating, ushered fellow Democrat Lt. Gov. Timothy Kaine to victory, and in the process propelled himself into the national spotlight as a very credible threat to New York Sen. Hillary Clinton, the heretofore early favorite.

So just who is Mark Warner? If you're from Virginia, he's your wildly popular governor, elected just three years ago and already, under the state's constitutional term-limits, just a year away from vacating office. But to the rest of the country, he's a relative no-name with little national juice. That is until Tuesday. Now he's the newly anointed Golden Child; the great Democratic hope; the one to watch. But at the same time, to many on the left, he appears as "Republican light" given his conservative positions on the death penalty, gun control, immigration, the economy and abortion.

To his credit, the 51-year-old multimillionaire venture capitalist graduate of Harvard Law School has an impressive fiscal track record as Virginia's governor. Since his election in 2001, state revenue has increased significantly from $19 billion in FY99 to nearly $30 billion in FY05. Warner has also successfully crossed the aisle to work with moderate Republican state legislators to reform the tax code, lowering food and income taxes, and increasing the sales and cigarette taxes in 2004. He's also been lauded for progressive positions on health care and education.

Virginia is a red state which Bush carried in 2004 with 54% of the vote, yet Warner was able to grab the governor's mansion by winning over solidly Republican rural voters. He did so by sponsoring a NASCAR team, supporting gun owners and hunters, by supporting certain restrictions on abortion such as parental notification, and by using a bluegrass song as his campaign theme. He crossed over successfully, and more importantly, as a genuine country boy.

"People in rural America may speak a little slower, but they can spot a phony a mile away," Warner said. "You see other candidates who say, 'Let's just do the optics.' But unless you feel as comfortable hanging out at a country fair or having a beer and eatin' some barbecue as you do at your high-end, high-tech reception, people are going to see through that."

Regarding his chances in '08, as Newsweek's Howard Fineman wrote this Summer, Warner has terrific selling points: he's a governor; he has money and access to more; he has a strong, loyal base; he's a Southerner; he has a worthy cross-over message; and he has time to craft all this into a winning campaign strategy.

And he's not Hillary Clinton, yet he feels a little like Bill, which Democrats love. Sure, prior to Tuesday, and likely still, national polls show Sen. Clinton soundly ahead of the pack. In fact, in a Marist poll just 2 weeks ago Warner was pulling just 1% to Hillary's 41%. But what Democrats will tell you privately is that they fear she's little more than a polarizing North Eastern lefty with as much of a chance of appealing to Southerners and moderate Republicans as Tom DeLay would to Manhattan liberals. And, many Democrats tell me while she might very well sprint through the primary primary, it's unlikely she could win the general election.

If Warner is to mount a serious bid for the White House he'll have to overcome the big challenge of being just a one-term governor. Some believe that will translate to a run for Sen. George Allen's GOP seat in next year's midterms. Recent polls show he would handily beat Allen, yet a head-to-head battle would likely force Warner to emphasize his more liberal pedigree in order to draw sharp contrasts with his Republican opponent. But that could throw a wrench into his presidential aspirations as a moderate challenger to Clinton.

The hullabaloo over Warner aside, we still prefer to see Al Gore return to the national political scene and seek the presidency. Until proven otherwise, he appears to have the best shot at winning...again.
Posted by The Ostroy Report at 12:57 AM

That was a nice write up! But from what you say about Warner, Andy, I can't say I'm too keen on him. I admit, I haven't heard about him since this VA vote. It sounds like he has a privileged pedigree (unlike Bill Clinton), and I don't go along with some of his stands you mentioned, re: taxes, guns, abortion.

But I don't really know him, so I'll reserve judgment. I do like his willingness to crossover and compromise. All this nasty, stubborn, party politics is getting to me. I much prefer Gore. At least for now.

(By the way, I would like to see more women and minorities in leadership positions. It's hard for me to identify with all these wealthy white men in government.)

It's a white man's world and always will be. They have the money and power.

As for Warner, Andy, let's stop eating our own.

Actually,
Mark Warner was the first one in his family to get a college education. He's a self made guy - nobody handed him anything unlike many of the other folks in politics. And he's not truly a southerner b/c he was born in Indiana. I have to say that I think he's an excellent choice for the Democratic ticket in 08. I think that's exactly what he plans to do to. Plus, he's got expereince taking a Republican created deficit and turning it around. Go Mark Go!

Ostroy, you have not been listening or watching closely enough. Many of us have been aware of Mark Warner for years.

He is not annointed by Kaine's victory any more than Bush is impeached by Kilgore's defeat.

The point is to keep your eye on the statehouses. That's where the next generation of leaders is coming from.

Hi anonymous. Your comment made me want to know more, and you're right - he was the first in his family to get a college education ... and he made it though using student loans! I like to hear that, especially with the new $50 billion spending-cut bill in the House seeking to cut student loans. Spending cuts are hard to swallow, but I think we need them. Still, I would increase availability to low-interest loans for collage-age kids, not decrease them.

Maybe if Warner makes it as Senator or other influencer-of-legislation, he will work at helping kids through school, as he was helped.

I don't think people whose college educations were handed to them respect these programs - that's why they get cut :(