The Real Tragedy of Bush & Cheney's Iraq Lies: Americans Are Turned Off to Fighting Terrorism 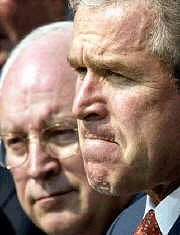 The war in Iraq has caused the death of 2100 U.S. soldiers and has maimed or wounded another 20,000. The financial cost has topped $400 billion, and our standing in the world has taken a huge blow since the invasion in March 2003. But the gravest consequence of all has been how the Bush/Cheney deception campaign over Iraq has sapped Americans' will to wage war on what is the real enemy, Al Qaeda, and the various terrorist cells hidden throughout the world. As Frank Rich pointed out Sunday in his NY Times column, polls show that the percentage of Americans who view fighting terrorism as a top priority have dropped precipitously to only single digits or low double digits. And that is one very scary statistic.

The Bushies' Wag the Dog strategy has backfired big time, and has put our nation at much greater risk than before the September 11 attacks. Americans have been running a political and military marathon, and they're exhausted. The Bush/Cheney cabal has shamelessly deceived them, sending 130,000 troops to fight an enemy that wasn't, and searching for WMD that didn't exist. They were duped into believing, albeit temporarily, that we were fighting terrorists; the same terrorists that attacked us on 9-11. This fairly tale that the Bushies concocted and perpetuated over the past four years was its own deadly WMD: weapon of mass distraction. While they were lying to us about Saddam and the imminent mushroom clouds, the sadistic murderer of 3000 Americans, Osama bin Laden, was making his getaway in the hills of Tora Bora, perhaps forever to elude our grasp.

And now a rapidly growing majority of Americans not only are saying the war was a mistake and want a withdrawal of the troops, a majority of them also now believe that the Bushies misled them into battle by manipulating and exaggerating pre-war intelligence. Bush and Cheney lied, and everyone now knows it. But this entire ordeal has sadly taken its emotional, physical and financial toll on the populace. Americans have become apathetic and indifferent to the overall struggle against the terrorist threat. What the Bush and Cheney lie machine has accomplished is to desensitize and demoralize our citizenry. They want an end to the death in Iraq, but their will to fight terror has been shattered. We can only hope that the will of the terrorists, the real enemy, has been depleted as well.
Posted by The Ostroy Report at 7:08 PM

Well, that's a discouraging (and sadly believable) perspective ... that linking the war on terrorism to the war in Iraq might backfire, in that if Americans sour on support for the Iraq conflict, that could also sour their support for fighting terrorism in general. Good point.