Bush's 35% Approval to Hurt GOP Tuesday and in '06 Midterms 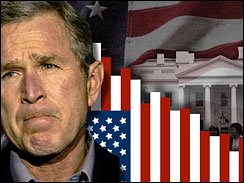 President Bush's approval rating, at 35%, is the lowest in his presidency and substantially lower than any second-term president since Richard Nixon. With this kind of job disapproval, the scandal-plagued Bush is likely to be a major liability to the Republican candidates in this Tuesday's key New Jersey and Virginia gubernatorial elections, and, barring a series of political miracles, could cause the GOP to lose control of either the House and/or the Senate in next year's midterms.

In Virginia's hotly contested race, Jerry Kilgore, a former state attorney general, is looking to take the seat being vacated by the very popular Democratic Governor Mark Warner. He's running against Lt. Gov. Tim Kaine, who's gained about 10 points in the polls recently. Kilgore, following the recent strategy of California Gov. Schwarzenegger, avoided a public appearance last week with Bush in a clear sign he was distancing himself from the president and his troubles. In New Jersey, Democrat John Corzine is running against businessman Douglas Forrester to replace acting Gov. Richard Codey, who took over for Governor Jim McGreevey last year after McGreevey was forced to leave office over a scandalous homosexual affair with a high-level aide.

The elections on Tuesday serve as the first barometer into what effect Bush's dismally low popularity and failed policies will have on the Republican Party in its efforts to maintain statewide power and retain control of the House and Senate. Several key GOP lawmakers face re-election next year in what could be very close races, among them: Tom DeLay (TX), Rick Santorum (PA), Jim Talent (MS), Jon Kyl (AZ); Conrad Burns (MT); Mike DeWine (OH); George Allen (VA), and Senate Majority Leader Bill Frist (TN).

Speaking on ABC's "This Week with George Stephanopoulos," former Republican Speaker of the House Newt Gingrich expressed serious concerns about his party's chances in next year's midterms after Stephanopoulos cited a new ABC News/Washington Post poll in which Americans, 55%-37%, said they'd prefer a Democratic-controlled Congress next year.

"I've been trying to tell everybody I can find on Capitol Hill and in the White House, if they don't have substantial change by the State of the Union, and if they don't convince the country that they've gotten the message, I think they're in big trouble." Stephanopoulos pressed for examples of voter dissatisfaction:

"We're the natural party of reform, and the Democrats are the natural party of pork. The fact that the president has sent up no rescissions, vetoed no bills, there's no fiscal control in Congress. I think there's a very serious problem. Everywhere I travel around the country, traditional conservative Republicans say, why would I vote for a majority that spends this kind of money?" He added that border-control and illegal immigration are priority issues to Americans today. Gingrich suggested that voters are dissatisfied with the status quo, and becoming increasingly disenfranchised, which could spell disaster for the GOP.