Cheney Can't Stop Lying and Distorting the Truth About Iraq War...Even as He's Lecturing Democrats About Honesty and Integrity 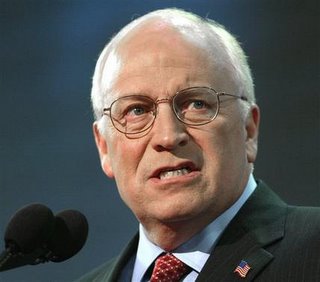 Vice president Dick Cheney is on a sanctimonious mission extolling the virtues of honest and responsible debate over the war in Iraq. He's highly criticized Democrats for their attacks on President Bush, declaring that those who accuse the president of lying about pre-war intelligence in order to justify the invasion are engaging in "revisionism of the most corrupt and shameless variety." Cheney's self-righteous lecturing on truth-telling gives new meaning to hypocrisy. After all, Cheney knows quite a few things about lying. He's been more 'corrupt and shameless' in perpetrating this unjust war than anyone.

What's more, Cheney can't stop the lying and distortion. In commenting early this week about Rep. Jack Murtha's (D-PA) proposal to immediately begin withdrawing our troops, Cheney said such an early exit would be a "terrible blow" to America's security and would empower the insurgents in Iraq:

"The terrorists believe that by controlling an entire country they will be able to target and overthrow other governments in the region, and to establish a radical Islamic empire that encompasses a region from Spain, across North Africa, through the Middle East and South Asia, all the way to Indonesia. They have made clear, as well, their ultimate ambitions: to arm themselves with weapons of mass destruction, to destroy Israel, to intimidate all Western countries and to cause mass death in the United States."

Can you believe Cheney's audacity and arrogance? Even as he's chastising the Democrats for a lack of honesty and integrity, even as his original reasons for invading Iraq have now been proven unfounded, he's still sounding the WMD alarm and the grave threat posed to the United States by the "terrorists." The last time Cheney lied to us about WMD we embarked on an unjust war that's now killed 2100 U.S. soldiers, maimed and wounded 20,000, and cost $400 billion. Perhaps if we stop listening to the lies we just might be able to get out of this quagmire.

Cheney lambasted the left as "dishonest and reprehensible" for claiming that the Bushies manipulated pre-war intelligence to make their case for war. But the laundry list of Bush's and Cheney's lies and deception over WMD and terrorists' ties to Saddam is well documented. This includes Bush's 2002 State of the Union claim about Iraq's Niger/uranium connections despite proof a year earlier by Joe Wilson to the contrary; and Cheney's claim that 9-11 hijacker Mohammed Atta met in Prague with officials of Al Qaeda and then lied about it when confronted by MSNBC reporter Gloria Borger.

Cheney's also steadfast in maintaining that the Democrats and Congress had access to the same pre-war intelligence documents as the White House. Leading Democrats including Ted Kennedy, Harry Reid and Nancy Pelosi have refuted this assertion, as has Republican Pat Roberts, chairman of the Senate Intelligence Committee. Said Kennedy: "It defies belief that the vice president can continue to say with a straight face that Congress had the same intelligence as the president and vice president had."
Posted by The Ostroy Report at 7:43 PM

How does Dick Cheney get to be a spokesman for "the terrorists," anyway? How can he possibly know the beliefs and motivations of the multifarious groups fighting in Iraq? Certainly not with the political crack that was the dummy intel he previously shook from his pusher Douglas Feith and his anti-CIA coterie the OSP, et al. Now that the counterfeit intel shop is shuttered, it begs the question: who is funneling the faux intel into Cheney's office these days? And if no one, then where is he getting his new junk?

We are asked to make several leaps to appreciate the most simple premise of Cheney's suggestion. Foremost among these is the administration favorite; the terrorist symbol. Cheney draws a bold line around the infighting Sunnis and Shiites - whose mutual destruction is civil war in all but name -- as a unified, al Queda sponsored, Iran guided, Syrian smuggled, America-hatin' war machine. His so called terrorists are determined to create a massive Islamic empire bent on destroying Israel and "cause mass death" in the US. Wow, that is some scary stuff, Dick.

The Brothers Grimm found no villain more frightening than the one Cheney has carefully constructed and set upon his countrymen.

Nor one as quite as fictitious.

Something about this man is not right. He seems to be out on a limb with his assertions ... WMD, torture.

He's articulate, and I've always enjoyed listening to him, even though I disagree with him. But lately he seems less in touch with reality.

Dick Cheney is a very good man to have as VP during a crisis or an armed conflict. While never finding time to serve in the military during a time of war, he is the ruthless kind of guy you really want when the shit hits the fan.

This is why Bush was whisked away for a tour of the southern states on Sept. 11, 2001, while Dick took the reins and calmly gave the go-ahead to shoot down planes full of Americans if necessary. He sees the conflict as a black and white issue. Like a war man...NOT like a President.

Unfortunately, what you DON'T want is a guy like this in a policy-making capacity, because his abilities to lead in crisis can lead to his policies CREATING & FOSTERING crisis...even if disingenuous...

Cheney should have been Secty. of Defense, and kept on a short leash until needed.

If this were a just war, and if it had been planned properly, Cheney could as easily be a hero.

He is the right man to do the pragmatic thing during a conflict. He is simply the wrong man to put in charge of the COUNTRY.

If one were to ask Cheney in some future time why he wasn't against pre-emptive war, would it be any wonder if he responded...as he did when asked about another war..., "I had other priorities"??

As an aside, it is interesting how many of your comments are from "anonymous". Anyone who bitches and moans about "Republican this" or "Conservative that" or how Democrats have no backbone...while hiding behind a veil of anonymity...deserves to be ignored, IMO.

Now that they have strangled democracy until she is blue in the face, it turns out they have had their claws around their own wretched throats the whole time.

Anyone ever think there might be a reason Dubya and Cheney are championing their efforts again? Maybe we're going to be attacked agains and they aren't going to stop it. This will once again turn people into Dubya lovers who at one time loved Clinton.