Will Rahm Emanuel, the Scrappy Head of the DCCC, Win Back the House For the Democrats? 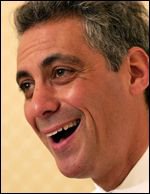 "People aren't happy with Washington! Look, we should be the party outside of Washington coming to goddamn kick ass out there." So says smack-talkin' Rep. Rahm Emanuel, the firebrand Illinois Congressman, former Clinton strategist and head of the Democratic Congressional Campaign Committee (DCCC), a post he assumed last January. In his new role, it's Emanuel's responsibility, and his personal mission, to win back the House next November. And if history is any indicator, Emanuel will do anything, anything, to make this happen. But can he succeed?

The biggest challenge facing Democrats next year is the congressional redistricting pushed through by the Republican majority that, on the surface, will make it very difficult for the left to win an appreciable number of races. Out of 435 seats in the House, Democrats need just a net gain of 15 seats to regain control. Sound like a paltry sum? Sure. But the Republicans' craftiness in redrawing districts has reduced the number of seats in play to about 30, versus about 90 this same time before the 1994 election, according to the Cook Political Report, an independent campaign handicapper. In short, both Democratic and Republican districts were reinforced, but the all-important, highly coveted swing districts have all been erased. To say that winning 15 out of 30 seats is a fantasy would be an understatement. Emanuel certainly has his work cut out for him.

But there is hope. Emanuel has been getting lots of help from the right. The president's approval rating is at an abysmal 35%. A majority of Americans are dissatisfied with the Republican-controlled Congress. The GOP is weighed down by the quagmire in Iraq, the Katrina and Rita failures, a struggling economy racked with rising interest rates, massive debt and a possible bursting of the housing bubble, and mounting scandal. Bush looks and is tired and beaten. His political currency is depleted, and he's become a pariah to incumbents. The GOP is a party in trouble. And it only seems to be getting worse. History has shown that under such extraordinary circumstances, where the populace grows so unhappy with its leaders, the typical rules of thumb go out the window. That's when 30 seats in play could become 89 fairly quickly.

Emanuel is highly respected in Democratic circles for his tenacity and tireless work ethic. "I've known Rahm for more than 20 years and he has always been a fighter for Democratic values, even before he was first elected to Congress," said former Democratic National Committee Chairman Terry McAuliffe earlier in the year. "With Rahm now using his talents to help Democratic candidates across the country, I know we will take back the House in 2006."

To get there, Emanuel's main task is to raise funds and build a bigger war chest than the GOP. He was a cash cow for Bill Clinton back in the early 90's when he was a young, brash, relentless fundraiser. He still has his mojo, and has already raised a record-breaking $32-million. But if the Democrats are going to win next year they'll need more than money. They need viable, engaging candidates and a solid platform with a clear message that will resonate well with voters, especially moderate Republicans and Independents. Emanuel leans toward the center, and favors a range of benefits to help the middle class such as college tax breaks; retirement savings incentives; and the importing of lower-cost prescription drugs.

But the Democrats need much more than that. We need to lay out a creative exit strategy for the war. We need to develop a universal health plan that makes good political, social and economic sense. We need to improve our educational system. We need an intelligent alternative energy and fuel plan. We need a sound economic policy designed to drastically reduce our national debt, create new jobs and stave off inflation. And, in what was the cornerstone of the Bushies' main political appeal, we need to demonstrate to voters that they can entrust us with national security and the protection of our borders. We need our version of the Contract With America, Newt Gingrich's and the GOP's very potent weapon used back in '94 to take control of Congress.

The dark tunnel that has been the Democratic Party for years has started to show some light. The Democrats have a true warrior in Emanuel, whose take-no-prisoners political muscling should bode well for the party between now and the midterms. He's a streetfighter, not afraid to pummel the enemy. He is someone the left desperately needs swinging in its corner. In case you haven't noticed, we don't have many tough guys in our party. And he's already making serious progress. He's put 41 districts in play and he's been recruiting uniquely exciting new candidates including military vets, FBI agents, a pastor, a sheriff and former NFL quarterback Heath Shuler. And the more the GOP struggles, the quicker Emanuel will pounce.

"This is about winning campaigns. I come from the Vince Lombardi school: 'Winning is everything,'" he said.
Posted by The Ostroy Report at 9:51 PM

All of this is encouraging, but you overlook one problem: Elephascist (I refuse to call them Republicans any more) control of the voting machines thanks to their cronies at Diebold (should be Thiefbold) and ES&S (Election Stealing and Skulduggery?). As long as the Elephascists' corporate cronies make unaccountable voting machines, which they can easily rig to give false results, we can't trust the elections. Our only hope is that if the Democratic candidates lead by wide enough margins in the polls, the Elephascists won't dare steal the elections for fear of FINALLY awakening the sheeple.

Somebody needs to ask Diebold and ES&S what happened in NJ and VA? Did they fall asleep at the wheel?

If the polls are correct, how could anyone vote for more of the same in areas where the seats can be won by the Dems?

Having said that, I fear that the Repubs will just cheat as usual and it won't matter what we Dems do. I hope I am wrong for the sake of out once great country.

hey sheeple, we need to stop whining about voter fraud ad naseum and start taking action, start getting involved, and start, as a party, putting up exciting candidates who have a clear, exciting platform. We will never win back the House and presidency if all we do is whine incessantly about the past wrongdoings of the GOP. STANDS is right. NJ and VA clearly show we can win elections.

Ivory Bill is correct about the voting machines. Why has there not been any thing done about this problem and it goes back to 2000? Five years and NOTHING has been done to make it law to have machines that have paper trails, just shows you that the repubs will do it again and again until something is done.

Go check out Zogby’s poll right before last years election, he had Kerry winning and even said so on his web site at 6 pm that evening from all of his exit polls and findings. Talk about cover ups, this country has many and we will continue to until the media gets a back bone and starts digging into stories like they have in the past.

So Bush was wrong about WMDs. Now 2000+ are dead, $200 billion is spent, 15,000+ wounded and maimed, with no end in sight. Pretty expensive mistake. Don't we pay the president to get it right? Isn't this mistake alone enough to condemn him? Other people and countries -- including the oft-maligned French -- were telling him he was wrong. He ignored them all. He was determined to go to war, no matter what the real threats were. He did not use war as a last resort, as he said he would. I think that ignoring the truth, along with sending men into battle with faulty intelligence ought to be a punishable offense.

I know that if I cost our country 2000 lives and $200 billion I would be in big trouble. The president should be in big trouble. Getting it wrong ought to matter and it ought to have consequences. Getting it wrong certainly has had consequences for the 2000+ dead and the 15,000+ wounded and maimed. It certainly has consequences for all our citizens and for our economy. President Bush seems to be trying to pass the buck. Where does the buck stop? Don't we need to get people in there who don't make the kinds of mistakes that George W. Bush makes? Hmmm?

They got it wrong on pre-war intelligence, wrong on Katrina, wrong on tax cuts for the rich, wrong on cuts in benefits for the poor, wrong on burgeoning deficits. How much else are they wrong about? How long are we going to take it? George W. Bush and the Republicans are just Wrong for America.

Ed, You got it right. This Clown i.e. Bush can get it wrong all he wants and there still will be people that think this inarticulate jackass and his corrupt admin. are heaven sent and the only ones that can save us from the Terrorists and the Godless Left wing.

But, really can you fault Bush for not fessing up to his myriad of screw-ups? I mean this guy is a two-bit snot nosed Ivy League party boy from an Aristocratic family that has never had to deal with the consequences of his actions since birth or had a real job!!! Anytime this halfwit screwed up he utilized his family's and Daddy’s connections to bail him out.

One thing that he has a proven track record on is business. That being that every business that he ever touched he ran it into the ground. Now he is doing it to the worlds greatest business and super power..the US. Rest assured when the bill comes due he will be long gone leaving the tab for Joe Six-pack Taxpayer to pay and the GOP will try to put the blame on those damned TAX AND SPEND LIBERALs.

Hey CHECK IT OUT!!

This was just posted on the AP:

Any guesses which Dirty bastard associated with the Bush Admin it is? First Libby then who's next?

Once again... Thank you Mr. President..Thank you for everything.

Once again... Thank you Mr. President..Thank you for everything.

It would help if Rahm Emanuel and William
Jefferson, Chair and co-Chair of the DCCC would stop voting with the Repukes every chance they get. Bankruptcy Bills, Cafta and etc. Both are a couple of rats.