George Will Joins the "Gore Will Run" Chorus 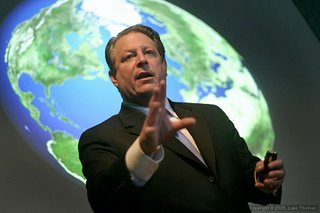 In his column Sunday, Will contends that Gore's concern over the environment, and the grave threat global warming poses to the world, will compel The Goracle to toss his hat into the ring.

We've written for almost a year now on this blog that Gore is The Comeback Kid , the "New Nixon" who will no doubt seek the presidency in '08 in what is likely his best opportunity to win. So it's especially gratifying to watch those influential in the mainstream media join the party as well.

Will's main premise is that Gore has inextricably tied the office of the presidency to the fight to save the environment. Gore's likely thinking? The biggest threat to our long-term survival is global warming. The clock is ticking. From the presidential pulpit one can mandate reforms and influence change on the global stage. Therefore, if I truly care about saving the world I must become president. This is a hard premise to ignore, especially if Gore is as serious and sincere about the threat of which he repeatedly warns.

In his new book and movie "An Inconvenient Truth," Gore has put a 10-year timetable on the near-term dangers of global warming, a critical threshold he calls the "point of no return" unless there's dramatic change to reduce greenhouse gases. Will points out that this period also coincides with the last year of the second term of the next president, suggesting that Gore sees his calling as something much bigger than merely touring the country with his PowerPoint presentation. "I'm under no illusions that there's any position in the world with as much influence" as the presidency, Gore asserts.

The Iraq war, homeland security, the economy, gas prices and right-wing corruption and cronyism are reasons enough to vote for change and to elect someone like Gore. But the dangers we face from global warming, and the raping of the environment by Repuglicans and their pals in corporate America, make Gore the most attractive choice. Will he, does he see how the country, the world beckons? Public denials aside, I believe it's clear he does. But as Will put it in his analogy to Abraham Lincoln as the future president lamented slavery, Lincoln did not exclaim: "That does it! Instead of running for president, I am going to prepare a PowerPoint presentation." Let's hope Gore agrees that he and his laptop will have greater power when plugged into the Oval Office.
Posted by The Ostroy Report at 9:50 AM

I just got my Gore 2008 bumper sticker in the mail yesterday.
I got it from JC's Designs.
They have a lot of liberal oriented bumerstickewrs and other things on there. Some are quite funny!
Dicky Neely
Corpus Christi, Tx.

George Will's opinion on ANYTHING is not worth the spittle he oozes...what a piece of work.

A conservative who doesn't rail against more government (Homeland Security with 120,000+ new government jobs = bureaucracy) balancing the budget (3 trillion in debt to the point where we're owned by the Emirates and China), government taking away our privacy (the NSA spying freeforall). Does he weigh in on these topics? No, he waits for someone else to then echoes his safe little addition to the mix so he can garner a paycheck.

There is no true republican or conservative. The name of the party should be the party of bush. The POB's.

What will it take for them to wake up? Possibly when the entire country including their own precious white hineys are in an internment camp.

You people keep talking about whose going to run on the Democratic side for president. Sorry, but it doesn’t make a rat’s ass of difference if the elections are fixed. Haven't you been paying attention? The Democrat won the last 2 elections! This is the most important issue.

Tom you're right. On election night '04 all three networks as well as the cable news channels unveiled their new "Election '04" look. A huge cosmetic distraction.

All night long I kept waiting for the anchors to be handed pieces of paper with the latest numbers, or a graphic to be put up to show how everything was going. Ya know, like the old days.

I remember feeling like it was a movie playing out. Dressed up anchors chatting about nothing. Just dancing in between commercials. Then, at 11pm when most elections are decided they took a hiatus and went to local channels. At 1:30am Kerry was due to come out but was delayed. His crowd was subdued.

To me the fix was in before the night even took place. It was a sham. All of it. The news networks, the anchors, they were all in on it. And...think back, Gore supporters: remember when Gore addressed the Dem Convention? I was cheering in my seat at his speech. He was saying everything I wanted to hear. But in the V.I.P. lounge where all the supposed 'newspeople' were watching, eating their canapes and drinking their cocktails, Judy Woodruff et al, were snickering and guffawing at his speech, totaling unaware or not giving "a rat's ass" that the conventioneers were having a lovefest.

No wonder these same anchors are all gone now. They were nothing but shills.

Diebold has got to DIE.

If the Repubs do and can cheat to fix passed and I'm afraid future elections, what do we do? What would the radical Founding Fathers do in a case like this?

We must come up with something instead of complaining and griping.

I sure wish I could get someone to pay me for my lame opinions. Perhaps if I, like Will, start every commentary with some obscure, barely relevant, historical anecdote, I can make the big bucks, too.

I was enraged when Chris Matthews and another jerk were saying that Gore couldn't win because he just didn't have a winning, out-going, dynamic personality. They didn't mention that HE WON THE POPULAR VOTE. Will we never see truth on TV?? Are they all against the Dems? What is going on? It's scary.

Ans to cathy
Arest them anybody that had anything to do with throwing the election,what should of been done the next day after the election.
The Democratic party is done,when they didnt go in after Terry then Gore,and put people in jail.So face it they havent been nothing since.So write them off.If this country cant come up new parties and are going to set on their a--.theirs nobody to vote for its going down to just because of the Democratic party.

To get back on topic, there was a nice long editorial in today’s St. Petersburg Times about Al Gore and 2008. Seems as though there are many that feel that Al is the ONLY one that stands a chance of winning in 08.

Remember Robert Kennedy didn’t announce his running for president until the spring of 1968 so Al can just wait it out until he feels the right time to announce. The article was stating the money that Al can raise in a very short time, plus the many money people he has backing him. The hype of Hillary is really just that and right now that plays well for Al as he gets his “dicks in a row” for the 08 elections.

Al will NOT commit until the time is right, he knows he’s in the driver’s seat and why show your trump card early. For those that don’t think Al Gore is a born again politician they need to think again because this time he’ll accept NOTHING by VICTORY!

I hope you are correct for I too believe it is Al Gore who can win in 2008. Add to his long list of attributes the way he came thru for the survivors of New Orleans. He is a man I would willing follow knowing full well that he has my back when the chips are down. I would vote for him a million times over.

He's truly a gentleman and a scholar and was unfairly punished for Clinton's personal failings. But let him SUPPORT someone else. We don't need reruns. We need a real shakeup.

In his new book and movie "An Inconvenient Truth," Gore has put a 10-year timetable on the near-term dangers of global warming, a critical threshold he calls the "point of no return" unless there's dramatic change to reduce greenhouse gases. Will points out that this period also coincides with the last year of the second term of the next president

Well then let's see if he is right in 10 years. If he is, then we can elect him president. Until then we can view him for the fearmongering nut that he is.

Actually, I pray every day that he will run in '08. Such an easy win that would be.

Unless we do something about election theft is this country it won't matter who runs.

Having said that, I am for Gore. He is the smartest candidate by far, and I am sick to death of cretin idiots in the White House.

It occurs to me, as well, that the first step to restoring our democracy is restoring the presidency to the man who won it in 2000.

Of course, it would also be helpful if Bush and Cheney were arrested 5 minutes after Gore's swearing-in ceremony.

This country needs a grass roots movement to combat these dreaded 'greenhouse gases'. I think we, the progressives, should start greenhouse gas reduction on 6/16/06 like this:
1. Tell all your liberal friends to gather at public places that are good for photo opportunities.
2. At the same time, we all start holding our breath for a week.

Al, the king moonbat, says that everyone who can hold his/her breath for a week will be rewarded in the afterlife with 72 electoral votes to be redistributed to the politician of their choice.

well, eediott ubuve, if wee deednot have so mene unedjikated, stoopeed ritewinngers in theez coontree, wee wood not kneed so mene soshal progrums...Az long az ther iz so mene hoo chooz not to beter themselvzes, wee wil kneed the soshal progrums. Insted of typing stooped why don't you spend your precious time getting someone to better themself so they will not need to cry to big daddy government. The GOP think they have the answer...problem is they don't have the solution. For you religious types...do unto others as...well you know the rest. It's a shame you often can't put that Jesusism into action!

Oh, second thought, maybe the religious rightwingers love to be kicked, shoved, screwed over, and left to rot in a mean god society. What goes around comes around and it is always a treat to see the arrogant GOP get their instant Karma. We're all ready for more laughs so, keep on being stoopeed. Why do you think the Redneck jokes are so popular?

Redneck jokes are *so* popular?

Watch out, your showing the mentality of the people you hang around with.

Those jokes are *so* popular.

America: winning the war in Iraq against the best efforts of:
- terrorists
- main stream media
- liberals and democratic leadership

History will show democrats were on the wrong side AGAIN. Just like they were with slavery & civil rights.