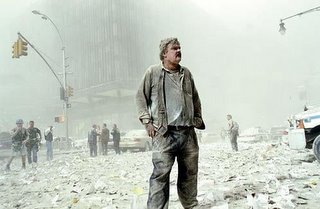 Make no mistake: "We are safer, but not safe." So said Fmr. Gov. Thomas Kean (R-NJ), co-chair of the 9/11 Commission, on NBC's Meet the Press Sunday. Last week's thwarted terror plot in London, he said, "is a wake-up call." This view was shared by the commission's vice-chair, Fmr. Rep. Lee Hamilton D-IN) who said of al Qaeda, "They're still out there. They're still plotting. Their intent is very clear...There isn't any doubt that they're coming at us." Chilling words indeed.

It's hard to believe that five years after the horrific 9/11 attacks we're still living under conditions of imminent threat from Osama bin Laden, the mastermind behind the attacks who, incredibly, remains free, and al Qaeda, the terrorist organization we can't seem to kill off.

Both Kean and Hamilton attribute the continued and growing terrorist threat to a "radicalization of Muslims" that has gotten worse since 9/11. Kean said this is due to the Iraq war, America's unwaivering support for Israel, and continued joblessness, poverty and despair among young Arab men who see martyrdom as an acceptable alternative. "It's a culture of death," not life, he said.

On Iraq, Hamilton asked, "Does it feed terrorism? Does America's policy toward Iraq motivate a lot of these radicalized Muslims? I think there's not much doubt about that. It does"...and it points to the overall disaffection with American foreign policy.

To make airline travel truly safer, for example, Kean cited the need for a unified watch list, more puffer machines that detect traces of explosives, and better bagging screening. "Until they're done we're not as safe as we could be."
Posted by The Ostroy Report at 9:43 PM

Kean also said this recent plot had been the in planning stage for five years. These men are twenty years old. Most don't have passports. It's been established this plot was not connected to Bin Laden. Their families are in tears and are surprised by all of this because they picked up no clues from their live-at-home sons. THey apparently haven't missed their sons when they "travelled to Pakistan".: These terrorsits hadn't even done a "dry run" and had not bought tickets for flights. There was no imminent threat but Bush pushed for an arrest anyway to scare the world and profit politically. This group is only a tad more sophisticated than the ignorant boys "captured" in the recent Fla. terrorist plot. I heard tonight they'll probably release all twenty-three for lack of evidence. We Americans have got to stop being so gullible and stop believing everyting they tell us.

Andy and the Democrats need to understand that the global war against Islamic terrorists is not a sitcom. There is no joke and a laugh as everything is nicely wrapped up in 45 minutes.

To be surprised that Al Qaeda is "still out there. still plotting" after 5 years is absurd. Just think during the Clinton years, we were attacked 7 times and just let Al Qaeda continue to prosper.

Muslims have been fighting this war for generations and are prepared to fight for many more generations to come. Democrats want everything wrapped up in time for dinner.

Buckle down boys and girls. If you want to win this war, it's going to be a long, hard slog - Just like President Bush and the Pentagon have long said. If Democrats are going to show they are more than the weak-kneed, anti-war, peace-at-all-costs, united nations worshipping moonbats that run the DNC, they are going to have to toughen up.

How about breaking ties with the unnions lobbying D.C.? How about making it easier to terminate airport screeners that don't perform well? How about supporting private organizations that can more efficiently check baggage?

I understand that the democrats 'have a plan', but most americans don't consider surrender a plan.

When I was in grade school, I learned that the prgression went from safe to safer and finally to safest.

How is it possible that, 'we are safer', and at the same time, 'but not safe?'

Oh, that's right, it's Rethug speak. Not much of what they say really makes any sense when you apply logic to their lies and propaganda.

What surprised me most about the Meet the Press interview of the 9/11 Commission Co-Chairs was how flabby they were in their statements about the Administration, seemingly having had their fangs pulled by the Bush League. They should have been forcibly pointing out the dozens of things the administration hasn't done to protect us, as well as the total political cave-in the DHS did about providing anti-terror funds to the states. Giving any significant money to total non-targets, such as Wyoming and Montana, is stupid when prime targets, such as NY City, Wash D.C., Chicago, Los Angeles, etc., are wide open for terrorism. And we still have addressed either our ports or our borders.

Kevin,
"we are safer" - for example, America has been attacked by Al Qaeda 1 time (9/11) during the Bush years versus 7 times during the Clinton years.

"but not safe" - Al Qaeda is still out there, planning and trying to attack us again.

According to Bush/Cheney, America is being attacked everyday by Al Qaeda terrorists in Iraq. We know they hate our freedom and cannot stand to see us liberate the Iraqi people. As Cheney has explained clearly, Saddam was working directly with Osama Bin Laden, and Al Qaeda is behind every attack, threat, and criticism of America and its leaders.

Anon 10:46pm hit the nail on the head. This administration loves to pull the Americans chain and they know it's easy to do, just use the word terrorist and everyone is scared crapless.

Remember when we were hiding under our WOODEN school desks for the drills for an atom bomb blast? We fell for that one big time and even today we’re feed this crap about duct taping your windows, for gods sake people THINK!

Johnny,
You're a caveman.