Some War-Mongering Bushevik Neocon Psychos Want to Invade Iran. One Quagmire Isn't Enough For Them 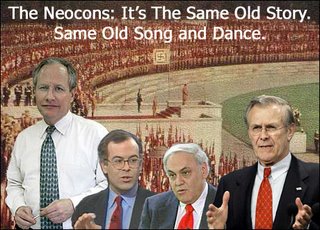 It began with incendiary al Qaeda-connection rhetoric and dire warnings of WMD stockpiles, designed to arouse Americans' fears of another horrific terrorist attack. It ultimately led to the invasion of Iraq, and an occupation that's been disastrous, deadly and never-ending. Apparently, the lessons of this debacle have yet to be learned, as a blood-thirsty band of delusional Bushevik neocons would love to invade Iran and go for President Mahmoud Ahmadinejad's head. According to the NY Times Thursday, these administration officials and GOP lawmakers are frustrated over what they believe to be the U.S. intelligence community's downplaying of the Iranian threat.

In a chilling repeat of the faulty intelligence found in the 2002 National Intelligence Estimate which framed the justification for the Iraq war, the House Intelligence Committee this week, led by Rep. Peter Hoekstra (R-MI), cited in a new report the growing weapons threat from Iran and its ties to terrorists. "Intelligence community managers and analysts must provide their best analytical judgments about Iranian W.M.D. programs and not shy away from provocative conclusions or bury disagreements in consensus assessments," the report said.

The consensus of the intelligence agencies is that Iran is still years away from building a nuclear weapon. This assessment angers some Bushevik and Pentagon officials who want to confront Iran directly over the WMD and terrorist threat. It's deja vu all over again.

The Bush neocons created a colossal, bloody mess in Iraq, and its become a tremendous political liability. As a result, many pundits believe--and the polls seem to reflect this contention--that the November midterm elections will be a referendum on the war and the GOP. Is a military action against Iran possible as the Repugs' much-anticipated "October surprise?" Can these war-mongering maniacs truly be going down the same deadly path as they did in 2002/03? If so, is there anything that can stop them?
Posted by The Ostroy Report at 9:24 PM

This will be a real test of the American people and their intelligence. It's the "Fool me once shame on you; fool me twice, shame on me." (Remember: Bush couldn't quite get that old saying straight?) The only good news I've heard about this is two reports on two different news stations saying that we just don't have good enough intelligende about Iran to know anything for sure. But that never stopped Bush.

I heard a big Bushovek talking on TV last week about how easily "we" can go into Iran and drop a nuclear bomb on their nuclear plants since we know where they are. He said it will probably have to be done. It didn't seem to bother him that we would be using a nuclear bomb to stop them from developing one. Who made Bush/America/us the Rulers of the World?

As the US has reached overstretch in terms of troop deployments, any attack on Iran will have to be limited - most likely an air attack. This of course will be risky. An air attack may well (further) harden the Iranian population against the US and strengthen the support for a regime that the neocons want removed. It is also doubtful that airstrikes alone will remove any technological capabilities in the medium and long term. If an airstrike is launched, it may well backfire in terms of both the tactical and strategic objectives of the 'chickenhawks'

Its a rough world out there and democrats are too weak to protect America.

Never underestimate the power of the religious right and the propaganda machines they ALREADY have to shift into high gear: drive-time Christian and "news/talk" radio will ram this one home.

Illinois congressman Danny Davis (Democrat) and an aide took a trip to Sri Lanka last year that was paid for by the Tamil Tigers, a group that the U.S. government has designated as a terrorist organization for its use of suicide bombers and child soldiers, law enforcement sources said.

Davis' seven-day trip came under new scrutiny this week following the arrests of 11 supporters of the organization on charges of participating in a broad conspiracy to support the terrorist group through money laundering, arms procurement and bribery of U.S. officials.

The five-term Democratic congressman said he was unaware that the Tigers paid for the trip and on his required congressional disclosure form he reported that the trip was paid for by a Hickory Hills, Ill.-based Tamil cultural organization, the Federation of Tamil Sangams of North America.

During the visit, Davis spent most of his time in a region controlled by the Liberation Tigers of Tamil Eelam, as the group is formally known, and visited the organization's political headquarters. He also met with a police chief for the region appointed by the Tigers.

Davis probably now has a far better undestanding of what's going on over there than Bush or his crew. Cheers to his covert visit, unless, of course it's a fiction purported by the Repugs akin to the one the used against McCain. It's hard to know fact from fiction anymore since the Repgus have been in power.

The dems are too weak comment only deserves a weak yawn. It was just another example of how weak the repugs are in defending their own piece of sh** platform. Weak is a proper description of their prez and congress running the show.

Problem is, as I see it-- This Bush inbred whitehouse is going to "End it All!" / and sadly; the people that call themselves Americans don't have a clue about the lies & propaganda.
Enjoy this time on Earth-- "Betwwen Global Warming & the Bushies-- our time is running out!
Praise the Lord!