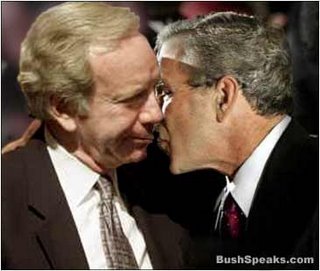 It's like a sideshow, this Senate race in Connecticut. First, the blogosphere succeeds in helping anti-war candidate Ned Lamont beat three-term Democrat Joe Lieberman in the state's primary. Then Old Joe refuses to lay down and die, announces his Independent candidacy, and is subsequently deserted by every prominent Democrat in Washington who quickly hop on the LamontWagon. The Dems apply pressure on Old Joe to quit the race, but to no avail. He gains momentum and a 46%-41% lead over Lamont (according to a new Rasmussen poll), and watches as President Bush, RNC chair Ken Mehlman, the GOP and every prominent Republican fails to endorse their candidate, Alan Schlesinger, as news breaks of his little problem at the gaming tables. What the heck is going on here? This seems more like a Mel Brooks movie than a political race.

Schlesinger has failed to garner the support of even one major Republican. Last week Mehlman, on MSNBC's Hardball with Chris Matthews, flat out refused the throw his party's support behind their guy. "I'm leaving that decision up to the people of Connecticut," he said, as he was dutifully campaigning in Ohio for Sen. Mike DeWine, who trails Democratic challenger Rep. Sherrod Brown in the polls. He's apparently not leaving that one up to voters.

On Hardball Tuesday night, Matthews aggressively questioned Schlesinger not only about his lack of party support, but about the gambling allegations as well. Schlesinger confirmed he at one point had at least $10,000 in gambling debts and once used a fake name to acquire a casino VIP card. He's currently banned from several Connecticut casinos for his "level of play," he said (read: cheating). To his party, this guy seems like the plague right now.

So what's up here? Is the GOP heavily courting Lieberman to switch parties? Despite what he says, he's in the race because of ego. This may come as a shock, but politicians have huge egos. They like the attention, the power and all the trappings that go with it. His party rejected him, but the other party can treat him real nice. Make him feel real good. Loved. Wanted. Important. With Schlesinger at just 6%, and with his early and perhaps formidable lead over Lamont, Lieberman has a strong shot at going all the way. He has big Dem donor bucks behind him, and the support of many moderate Republicans, and Independents. It should be noted that Independents comprise the majority of Connecticut's voters. Does he need the GOP? Does he need to actually switch parties? Probably not. Will he? That's a toss-up. But think of it this way. If he goes all the way in November as an Independent, he'll have a very hearty last laugh. And like John McCain, he'll acquire some serious F.U. currency and end up being the darling of both parties, who'll be endlessly kissing his Independent ass for his vote. Not a bad place to be if you have a huge ego.
Posted by The Ostroy Report at 9:57 PM

Joe is in a spider hole of denial!

To be in denial is to really have psyched yourself into "not knowing" Alcoholics in denial really believe that they aren't addicted. Lieberman is not in denial. He knows exactly what he's doing. The people in denial are the ones who think "vote for the person not the party". Starters, he's not a "good person" and second the Dems need all the power they can get. He won't/didn't provide that support for the Dems. However, I bet the Repugs pull off stealing this election if that's what it takes to get their man "Joe" in.

America is the greatest country in the world! A country where anyone, even Joe Lieberman, can run for elected office as an independent candidate.

tired of the political quaqmire in Washington?

throw ALL DEMOCRATS and ALL REPUBLICANS out of office this november. Vote for independent candidates!!

Joe Lieberman votes for Israel's interests first, that's why he's with the Republicans.

Joe is gonna lose. Ned's the real deal. Everyone who interviews him sees it. Ct. voters will see it before November. Bye Joe.

Ned is a hand puppet for MoveOn.org

George - From your mouth to God's ears. MOVE ON is with the people, by the people and for the people.

MoveOn is full of anti-capitalist socialists that blame America for all the problems in the world.

MoveOn types should move to China.

But....the campaign is just starting. Lamont will pick up more of the
Democratic, Independent and Republican vote as people get to know him,

CT is a very BLUE state. Bush is at 23% popularity there. Independents and
Democrats are going to vote knowing this is a referendum on Bush. And
Lieberman has been caught kissing Bush, so he will pay the price
accordingly.

When CNN/Gallup's poll comes out, you might as well ignore it. You know
they will inflate for Joe, just like they're inflating for Bush (42%
rating?).
Trust Zogby and Harris (33-34%). Trust ARG as well.

A challenge to all those who still believe Bush won:
Use the National Exit Poll
"How Voted in 2000" demographic
("NatExit" sheet) to come up
with just ONE plausible Bush win scenario.

I wish i could vote in Conn.i would cast my vote for Ned Lamont.Throw that Zell Miller CLONE (OUT} JOE HAS ALWAYS BEEN A TRAITOR to the party and helps other team.Throw the bum out.