Hastert Says U.S. Intelligence "Saved the Day" in Thwarted British Terror Plot. Whatever it is He's Smoking, We Want Some 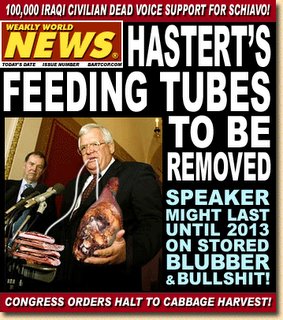 Another Weapon of Mass Deception has been uncovered. In the wake of the federal court's ruling last week that the Busheviks' wiretapping program is unconstitutional, House Speaker J. Dennis Hastert defended the illegal spy program by saying such U.S intelligence-gathering tactics were responsible for thwarting the recent airline bombing plot in Great Britain. In criticizing Judge Anna Diggs Taylor's decision, Hastert said "our terrorist surveillance programs are critical to fighting the war on terror and saved the day by foiling the London terror plot." Yes, he actually said "saved the day." Forget the fact that it was British and Pakastani intelligence that prevented this attack, and in the process spared America another horrific attack of catastrophic proportions. An attack which clearly shows America's true vulnerability and the Busheviks' inability to protect its citizens. Yet that didn't stop Hastert from giving the Bushies full credit anyway.

Where is the mainstream media, and why isn't it doing its job calling out this BS? How is that politicians like Hastert are allowed to lie through their teeth with impunity on matters so sensitive as homeland security and the safety of our citizens? How is it that Bush, Cheney, Hastert and the rest of the Bushevik truthiness squad can say whatever the hell they want, and no one in the mainstream press challenges them?

The Busheviks are committing the worst acts of treason in politicizing the Iraq war, 9/11 and the continuing threat from terrorists. They've manipulated intelligence, manufactured evidence, stretched the truth, outright lied and are deceiving Americans every single day in their maniacal quest to maintain power and further their psychotic neocon agenda. We must do everything in our power to rid Washington of these criminals. And when, not if, we regain control of the House and Senate, we must begin aggressive investigations into this criminality, and indict and impeach those responsible. Republicans better start looking over their shoulders. Their day of reckoning is coming.
Posted by The Ostroy Report at 7:20 AM

MORE LIES LIES LIES AND SOME AMERICANS I TALK TO STILL BELIEVE THEM!

WE ARE SUFFERING BECAUSE OF THE DUMBING DOWN OF AMERICANS THAT STARTED OVER 30 YEARS AGO. THEY QUESTION NOTHING OF THE ADMINISTRATION AND BELIEVE ALL.

IT'S THAT AUTHORITARIAN PERSONALITY THAT JOHN DEAN WRITES ABOUT IN HIS NEW BOOK WHICH RESULTS IN THE 30% PLUS BLINDLY FOLLOWING THE REPUBS OVER A CLIFF.

THE REST OF US MUST GET OUT IN FULL FORCE NEXT NOVEMBER OR WE STAND TO LOSE IT ALL!

8:16 AM is right but that doesn't explain the media's failure to report the truth. That's why so many are still "dumb"; they don't get the facts. Who is responsible for the media's failure to tell the whole story? Who runs the networks? Why are they protecting this administration by censoring what the public hears? Whoever they are - they share the guilt in the deception and thus commit treason.

Is it really deception and treason? What good would knowing the whole truth do to most Amercians - especially when we know that the Democrats wouldn't do anything else. I mean if the democrats were in power, we wouldn't have phones being tapped... so then you'd have no fricken idea what the terrorists are doing would you. So with a democratic government, the terrorists would have already taken out many more Americans - thats what your saying right?
And the amount of Bush haters has grown and grown, especially in media circles world wide - certainly in Australia where I'm from its in vogue to be against the war and hate Bush, so how can you trust reports that say the information that stopped the bombs was British and pakistani - are they more reliable sources than the news outlets you dislike?
And a more liberal government would see... the degredation of society be legalised right? mmm, what a great alernative!

Funny - you don't write "aussie" -- And if you are Australian why don't you get y our facts straight before you comment on another country? Or, are you an Aussie/American? At any rate HEAR THIS: BUSH CAN WIRE TAP AS OFTEN AS HE WANTS. ALL HE HAS TO DO IS GET A WARRANT SO THERE IS A SECRET BUT LEGAL RECORD OF IT. (YOU SEE - THAT PROTECTS CITIZENS AND OUR COUNTRY FROM BEING TAKEN OVER BY A DICTATOR. WE LIKE OUR FREEDOM THE KIND BUSH IS FIGHTING SO HARD TO GIVE TO THE IRAQIS.) HE CAN EVEN GET THE WARRANT AFTER AFTER AFTER AFTER HE TAPS WIRES. THEN WE WOULD BE FOLLOWING THE LAW AND THE CONSTITUTION. GET IT???? THIS HASSLE IS OF HIS MAKING.

I mean if the democrats were in power, we wouldn't have phones being tapped

What nonsense. Nobody that I know has suggested not wiretapping suspected terrorists. On the contrary, we applaud legal wiretapping as a legitimate tool to prevent a terroist attack. When it's done without a warrant or propable cause, it's unconstitutional and illegal. All that is asked is they do it legally. They say they need to do this illegally because the legal way offers too many impediments to immediate action. However, given their penchant for lying, deception, fabrication and willingness to trample civil liberties, individual freedoms and the reputations of those who oppose them, I believe they just don't want a "paper trail" that proves they are using illegal surveillance for political ends and nothing to do with national security.

4:22 is right. The government can get the warrant afer the emergency wire tap has begun. There is no excuse for Bush to make this an issue.

It would just be terrible if the democrats authorised these taps too late and loss of american life occured because of red tape. Surely we've lost enough life already...

THE GOVERNMENT CAN GET THE WARRANT AFTER THE EMERGENCY WIRE TAP HAS BEGUN." THIS IS TRUE.

BUSH PERSON ORDERS EMERGENCY WIRE TAP. WIRE TAP GOES INTO EFFECT. THE BAD GUYS ARE OVER HEARD AND CAPTURED. WE ARE ALL SAFE. BUSH PERSON/S THEN FILES A WARRANT WITH THE PROPER AUTHORITIES. THERE IS NOW A LEGAL RECORD OF THE WIRE TAP. ALL IS WELL. THE LAW HAS NOT BEEN BROKEN. THERE IS A RECORD OF THE WIRE TAP. THE TERRORISTS HAVE BEEN CAUGHT. AMERICAN IS SAFE. IT IS SAFE BECAUSE IT IS A COUNTRY OF LAWS AND A GRAND CONSTITUTION.

AND WE KNOW THAT THE WIRETAP HAS INDEED BEEN ON SUSPECTED TERRORISTS. NOT A POLITICAL ENEMY OF SOMEONE IN THE ADMINISTRATION, FOR EXAMPLE.

Can anyone explain how Democrats have become the center for conspiracy theory addicted weaklings?

They're in favor of fighting the war on terror (sort of), but not in favor of killing terrorists in Iraq.

They're against killing terrorists who surrender on the battlefield, but also against holding them in prisons like Gitmo.

How many of this countrys` laws have to be Broken, disregarded and Ridiculed by this 'sitting' president and his cabal of war mongers before Impeachment proceedings will be brought forth against Him ? Great Britian is Ready to "Serve Blair' his walking papers,, in the next day or so. Then Bush will have No ally to take any heat off Him . He will be on his own with This Worsening Iraqi War he started under false pretenses. I don`t think there will be a man in Britian who will Take up the Banner For this U.S. of A. in all of Great Britian. The People there have Spoken Loud & Clear... This Is Something that Has to happen here. Bush has turned the whole world against the American people by what he has done. The American people do not deserve to be painted with the same brush that Bush is ... but as long as we sit back and Let him sit in our White House... Pulling his Devious strings all over the world, we are going to be Judged same as him. And He knows this..and likes it this way. How can we wait longer to do something about Evicting him and his regime..Now ? Mr. Fitzgerald, January is too far off in the future. Now is The time. November is near, but Proceedings need to be In the Works Now, for Impeachment proceedings to Be brought together. People, Full steam ahead ! VGF