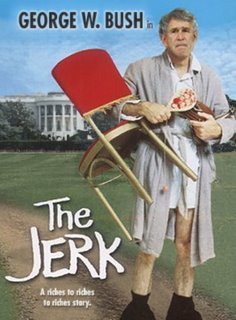 President Bush is perhaps the most self-absorbed, arrogant, delusional and dangerous president in American history. His foreign policy strategies and actions will be a poly-sci case study for students for years to come. With Iraq in particular, he invaded a sovereign nation on flawed/manipulated/manufactured evidence and intelligence; toppled its leader in a campaign pompously billed as "shock and awe;" turned the country into a chaotic mess on the brink of full-scale civil war; causes over 100 Iraqis per day to be killed in mounting sectarian violence; and then has the supreme audacity to be angry that the Iraqi people aren't somehow happy and excited about all the good that he's done for them. The Iraqis, he believes, are unappreciative. His arrogance clearly knows no bounds.

Bush held a private Pentagon lunch Tuesday for his war cabinet and outside experts whose collective brains he attempted to pick for advice and assessments of the current state of affairs in Iraq. The president clearly is frustrated with the level of progress there, and hinted that Prime Minister Nuri Kamal al-Maliki may be ineffective in getting the new Democracy to its next stages.

One anonymous person in attendance, according to the NY Times, said Bush appeared frustrated that Iraqis showed little appreciation over the sacrifices the United States had made in Iraq, and was surprised that a recent anti-America demonstration in Baghdad in support of Hezbollah drew such a large crowd. "I do think he was frustrated about why 10,000 Shiites would go into the streets and demonstrate against the United States."

Can you believe that? Bush turns Iraq on its head, hemorrhaging blood down its streets over WMD and al Qaeda connections that never existed, and he can't understand why they'd be angry with us? And therein, folks, lies the central problem with the Busheviks' foreign policy: it's created by a delusional and dangerous fool.
Posted by The Ostroy Report at 7:50 AM

So what can we say about the 30% plus Americans that still support this delusional and dangerous fool?


Cathy
From the proud but hurting State of Michigan

Insane is more like it! I've written and recorded 3 songs about this over the last few years. You can hear and download them for free at the link below. If you like them please pass it along.

Cathy, they are the Left Behind.

I'm with Cathy on this. And how do you think Bush got away with it in the first place, despite being told by authorties it wouldn't work (and there were no WMDs) Because the majority of Americans supported him; and, many dumb Dems supported him and gave him the power to do as he would. Even now there is not enough opposition to him. One squawk about terrorists and his approval rating goes up. Who are these people?

Opposing the ceasefire in Lebanon only to fedex more laser guided bunker busters to USrael; what he's really annoyed about is people not thanking him enough for spilling the blood and guts of their brothers and sisters and parents and grandparents.
Not just insane I'd say, but the incarnation of evil.

Wow, this sounds like World War II, after we invaded France & Germany following the Japanese attack on Pearl Harbor.

"invaded a sovereign nation on flawed evidence and intelligence"

"..turned the country into a chaotic mess on the brink of full-scale civil war"

"causes over 100 people per day to be killed"

12:42 Could it be that you're not remembering WWII accurately. It's been a long time since you heard that and your memory may be faulty. That's not what the history books say. And who do you remember saying such things. Roosevelt was a Democrat - do you remember that?

there was clearly faulty intelligence during the invasion of Normandy that resulted in hundreds/thousands of additional deaths.

We invaded France, which did not attack us. The Japanese, who were not in Europe attacked us.

We toppled Hitler, the leader of Germany

Our carpet bombing of European cities killed many more than 100 innocent people a day.

If you don't know this, maybe you are reading the wrong history books.

1:31PM I will check the books. However, I am relieved to hear from you that the reason for the mishaps you claim in WWII are the result of faulty intelligence and not that the President ignored the intelligence warning us of attack and then started a pre-emptive war after again ignoring additional itelligence reports and the advice of his professional advisors. The two wars are not analogous. Then we still had our American values, integrity and "know-how."

Clinton also ignored the same intelligence warnings. In fact, he even turned down at least 4 opportunities to kill or capture Osama Bin Laden. The 9/11 Commission Report details these opportunities. Do you hold Clinton just as responsible?

The two wars are analogous. Democrats just have their heads too far into the sand to see that appeasement of islamic terrorists does not work.

2:46 Yeah, yeah, yeah. When you can't win by logic you switch to bashing the Dems. You didn't even compare the two wars; you didn't even mention WWII; you used a Clinton "thing" and they CONCLUDED the two wars - WWII and Iraq are analogous. Pa-leeze.

Then it's patently absurd to think Bush shared or shares intelligence with Dems and the likes of Hillary. The Dems can't even find out who Cheny met with on energy.

are you claiming that all those democrats who voted to invade Iraq did so without any intelligence?

If so, you've got a lot of rubber stamps in the DNC.

4:44 Nooooooo. I'm saying they didn't see the real intelligence, but that which was manufactured by Cheney and his newly created branch of intelligence.

Bush's comments are reminiscent of "the good ol days" in the South, if you get my drift.

Where "the niggers" shoulda been a bit "more appreciative" of the slave existence, the death, the misery, and the raping they typically received from their masters.

Iraq's people are merely considered to be the new age nigger, folks. Nothing more, nothing less.

Yeah the Bush apologist really got it right. The Iraq War is just like WWII. Repugs were sympathetic to Hitler, said it was Europe's war and vilified Roosevelt for getting involved. It is a kind of reverse analogy. The big difference is that Roosevelt was right and Bush is dead wrong. It's possible to analogize any war. Our misadventures and devastation of Vietnam, though not the same as our Iraq catastrophe, has far more telling parallels than WWII.

I'm a lifelong Democrat, and I'm not voting for any Democrat who supported the war. Luckily, here in California, I don't even have to consider it. My local rep. was always opposed to the war, and Feinstein is on her own, as far as I'm concerned. Biden got EXACTLY what he deserved, and I expect that he would switch parties were it not for the fact that he's planning to run as an independent. As for faulty intelligence, who cares? I've been to the Middle East 7 times on short trips, and apparently learned more about the region than all the Presidents' toadies. The Democrats who voted for the war should not have been stampeded by the Prince of Darkness, Karl Rove. Many of them were, and they, like the Republicans, deserve to lose their offices for it. Thousands of American soldiers and tens of thousands of Iraqi civilians have died because of the Bush administration, and for that, Bush and all his aides deserve to be sent to the lowest circle of hell.