Time to Defeat the Repugs with their Own Words 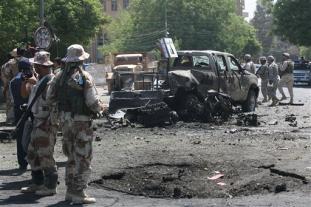 The war in Iraq is spiraling out of control. The Sunnis and Shiites are engaged in civil war, and the streets are hemorrhaging American and Iraqi blood. This single issue, as illustrated by the fiercely close Lieberman/Lamont race in Connecticut, will be the major campaign issue this election year. The highly unpopular war can and will be the Democrats' ticket to victory in November. To drive this point home, how about the following powerful commercial:

Visuals: We see images of the war. Bombs exploding. People dying in the streets. Soldiers coming home in body bags and coffins draped in the American flag. The following quotes play over the visuals, repeated several times in a loop until they start playing over each other in one jumbled mess of words, getting louder and louder:

"Simply stated, there is no doubt that Saddam Hussein now has weapons of mass destruction" (Cheney, August 26, 2002

"We know where they are. They're in the area around Tikrit and Baghdad and east, west, south and north somewhat" (Rumsfeld, March 30, 2003)

The jumbled quotes are very loud now, and then start to fade until they're playing in the background lightly under the following close:

Voice Over (disdainfully): There were no weapons of mass destruction...there was no connection to Al Qaeda....there was no reason whatsoever to go to war with Iraq. But now we're there, and the Republicans can't seem to find a way out. Our soldiers need to stop dying. It's time to put an end to the madness. Vote Democrat in November.

Think of the impact an ad like this could have. Let's use Bush's, Cheney's and Rumsfeld's own words to remind voters just how dangerously out of touch with reality these maniacs have been over the war.
Posted by The Ostroy Report at 9:35 PM

Andy,
Great idea. If the commercial can only close out with Democrats celebrating every time an American soldier dies it will really drive the Democratic point home.

Or, the commercial could use the illogical, hence stupid comment by 10:25PM to further illustrate the insanity of the Republicans.

People who want a war to stop celebrate the death of soldiers. Really off the wall.

Maybe Rumsfeld, Cheney or Bush send their comments to Andy.

I would also show the names of both the Republicans and the Democrats in congress who voted to authorize the chimp to attack Iraq - it's a long list, I know...

Another way to defeat them is to play their game where possible. For example: Michigan has an open primary today.(We do not have to register to vote by declaring a party in Michigan.)Our Democratic senator Debbie Stabenaw is unchallenged in the primary. There are two Repubs running in the Repub primary for the senate. What to do? Vote in the Repub primary for the weakest candidate that would face Stabenaw. In this case vote for Keith Butler. It's done all the time and every day voters don't have a clue. It's a power game the political types.

Cathy
From the proud State of Michigan

It's a longe list, but those criminals could be sorted out by State. That would make it easier to single them out when you go vote.

I saw a video like the one you are suggesting on the www.informationclearinghouse.info website time ago. By the way Andy, you should add a link to it. It's a great, well sorted source of information.

Commercial, scammercial. I don't care if you have pictures of bush bayoneting babies and cheney bar-be-quing them over an open pit things aren't going to change until we get rid of the rigged election system, jerry-mandering, non-paper trail voting machines, and release the strangle hold defense contractors have on the political practice.

They plan to and will most likely succeed at stealing yet another election unless the point spread is very very huge.
Those 'too-close-to-call' campaigns are suspect, to be sure.

That could happen. We will see.

I am happy that Kennedy has a suit against voting machine manufacturers.

Nancy Pelosi, the House minority leader, has publicly stated that if her party regains control of the House that they will not impeach Mr. Bush.

To paraphrase a statement attributed to Albert Einstein, “A sign of insanity is performing the same act over and over and getting the same result each time but expecting a different result.”

It is insane to continue voting for Republicrats and expecting things to change.

Priority One is taking back the House and Senate from vile Conservatives whose failed policies have damaged the US for decades to come. Independents are the answer but will take several election cycles to gain a foothold. We don't have that kind of time. Bush wants to bring on the end of the world. His supporters have to be removed ASAP. Regardless of Pelosi's statements about impeachment, vote for your Democratic representative and Senator to get the Constitution-purging Conservatives out of office. They want endless war. We want endless peace. Once Democrats are back in charge, we can hold their feet to the fire on the issues we hold dear.