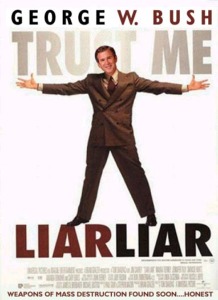 On May 2, 2003 President Bush landed with much fanfare aboard the USS Abraham Lincoln and declared "Mission Accomplished" regarding the war in Iraq. At Monday's soon-to-be-considered-a-classic press conference, Bush, in rallying against what he and the Repugs call the Democrats' "cut and run" policy, said "You don't succeed by leaving before the mission is complete" Obviously, mission definitely not yet accomplished.

The press conference exposed Bush once again for lying through his teeth on the subject of the war and its justification based on revenge for the 9/11 attacks. In between what felt like hours of inane, repetitive drivel about the "war on terror," Bush was interrupted by a reporter who challenged the president with "what does Iraq have to do with that?" Bush shot back, "Nothing...except that it's part of...and nobody's even suggested in this administration that Saddam Hussein ordered the attack." But this, as we all know by now, is a crock. Bush, Cheney, Rice, Rumsfeld and the rest of the Busheviks have, since 9/11, been beating into Americans' heads that Saddam and the attacks are indeed inextricably tied. In fact, that's why as of September 2003, polling showed that an astounding 69% of Americans believed that Iraq was responsible for the attacks.

Here's a sampling of the incendiary rhetoric spewed by Bush himself in order to dupe Americans and scare the bajeesus out of them:

10/7/02: "We've learned that Iraq has trained al Qaeda members in bomb-making, and poisons, and deadly gases...We know that al Qaeda and Iraq have had high-level contacts that go back a decade."

And even at Monday's press conference the president couldn't help himself, lobbing these Weapons of Mass Deception in direct contradiction with his earlier denial: "Imagine a world in which Saddam Hussein was there stirring even more trouble in a part of the world that, uh, that had so much resentment, so much hatred, that people came and killed 3000 of our citizens;"...and that pulling out of Iraq now would embolden terrorists and result in future attacks on U.S. soil.

The war, and Bush's handling of it, remain incredibly unpopular. New CNN poll numbers show that on the subject of the Iraq war, the president's job approval is at a new low of 36%. Only 44% said he is "honest and trustworthy" and just 42% said he "inspires confidence." Let's hope the polls and the pundits are right, that the November midterm elections will be a referendum on Bush and his failed war.
Posted by The Ostroy Report at 7:38 AM

THEY CHEAT, THEY LIE AND THEY WILL STEAL THE ELECTION IN 2006!

ALL HELL SHOULD THEN BREAK OUT, BUT WE THE PEOPLE ARE WIMPS.

EVERY DAY I THINK ABOUT HOW BUSH AND HIS ILK HAVE DESTROYED OUR ONCE GREAT COUNTRY.

There no need for conservatives to steal elections. Democrats don't have the numbers...

A college professor at Syracuse University has announced that liberals have a problem. According to recent studies liberals aren't having enough children. A 2004 survey shows that for every 100 liberal adults there were 147 children.. That doesn't sound bad. Some people have kids, others don't. Some should. Some shouldn't.

But what about conservative adults? Evidently conservatives are a bit more fertile .. or they do it more ... or maybe both. For every 100 conservative adults you will find 208 kids. Now assuming kids generally grow up to be like their parents politically, that's a gap of 41%. That means that right now, society is churning out more conservatives than liberals. How can this be? Well, for starters most conservatives are more family-oriented and thus have more kids. Liberals tend to focus more on themselves, which is fine.

But all of this is horrible news to the Left. They're going to have to start promoting a baby boom to counteract the shortfall. This means leftist men are going to have to find leftist women they are willing to impregnate. That can be a daunting task. Consider, for instance, the front-runner for the Democrat nomination.

Maybe the Democratic party could pay people to have kids, like some countries do where the birth rate is falling. There is one segment of society that could really cash in on all of this, though.

You single guys out there looking for love in all the wrong places .... try pretending to be a liberal...it could be your lucky day!

Do you really think there is going to be another election in the US.

This is a time of war. Bush decides what is constitutional -
http://www.boston.com/news/nation/articles/2006/04/30/bush_challenges_hundreds_of_laws/?page=1

If you want to know where we're heading, listen to David Ray Griffin speak at Wisconsin University. He is a very credible man, and what he speaks of is verifiable -
http://video.google.com/videoplay?docid=3538037502590699697&q=david+ray+griffin

Its still a sad commentary on the collective intellect of americans that 33% still back this clown and 44% think hes honest . I'm not sure a democracy can survive that much stupidity .

Neal blames the Dems's poor condition on decline in birth rates; Dionne in the Post blamed in on Hofstadter; and the Repugs blame it on their being socialist extremists. I don't know what the real reason is, but I do know that the thinking of liberals is the only salvation for this country. They believe in helping those in need; they believe in civil rights; they believe in upholding the Constituion; they believe in doing what's right for the largest number of people - they believe in a strong, powerful, and effective America that takes care of all of its people. They are smart and kind. They made America what it used to be, before Bush, starting with Roosevelt. What they apparently are not these days is effective in educating the rest of the country and presenting themselves forcefully.

Neal is forgetting that the Mexican Americans have many children and they are leaning Democratic! The Repbubs in my state are not having more children then the Dems. They are only having one or two. Who can afford more than that?

What's more important is that the Repubs will cheat, lie and do anything to stay in power.

The 'Joint Resolution to Authorize the Use of United States Armed Forces Against Iraq' states in section 3b that the authorization of force hinged on two points:

Eliminating the threat Iraq Posed, which of course was utterly nonexistant.

Attacking those involved with 9/11, which Iraq of course was not.

As the whole world knows, Bush did not and could not have done so because the charges are false. Therefore the Joint Resolution is not in effect and all US military activity in Iraq is illegal.

I STILL SAY THEY WILL CHEAT AND WIN ANYWAY.

DOES ANYONE ELSE FEEL THE SAME?

Yes, they will cheat, they will win and they will get away with it AGAIN. Of course 1:34 is correct - but here in America the response seems to be "so what"

Cathy
From the Great State of Mediocrity

It us utterly amazing that the American public and opposition Democrats just keep taking these kicks in the teeth from the GOP and the Bush administration.

THey lie lie lie. They are killing, maiming, stealing and destroying .. and you guys just keep taking it.

God damn it Americans .. do something about this!!!!!!

Have you no pride in self and country???

PS I note that another Canadian, Neil Young has tried to do something with his protest album Living with War which has the song, Lets Impeach the President.

OMG!!!! I have writen my congressman about impeachment.... have yet to hear a response....But maybe if we Dems take the Houses in November we can try, but do we really want Cheney as Pres????? The thought is as horrifying as reality is now.
Another thing, I never voted for Bush. But to my astonishment my Dem Mother voted for him 2004. Why I asked, and she just said that she thought he was ok. Yes , I was speechless. For my birthday I forced her to watch Farenhieght 911...but she did not say anything. I think FEAR has taken hold of people.

Have you no pride in self and country???


Of COURSE we do! It's just that a great number of us are complete fucking idiots, okay?

The main prob is that the dems are merely "fascism light" and totally bought into the neo-liberal global corporatist elite plans for nwo and culling of the useless eaters. The People need to launch an attack on DC and begin the redemocratization of the world or be exterminated by "the chosen".

"Changing your mind is the most revolutionary act an individual can make."

I must agree "voting is a joke". Unless we insist on voting on whatever that can unquestionly be counted from a paper ballot. Period! Also, we need new people in both parties in DC right now. It seems all of these people, no matter what party, is corrupt and on the take. They all have their hands in the pie and stealing from Americans. Why else would the Democrats say nothing about all this and allow it to happen? Why wouldn't they use every chance they have to let us know the truth? They DON'T want us to know!!! America is lost unless we get involved and either run for offices (start in your own community) and vote for new people. We could also refuse to vote and/or we could refuse to pay taxes until they straighten up. One way or another we need to take America back or we won't have one. We are hated and feared by the world. They call us the terrorists and we just might be the terrorists. We honestly don't have a clue what this govt. has been doing for years. It's time we demand to find out.

Wake up ! People of this country ! We Like to think of ourselves as a "Democratic' people. We have believed ourselves thru at least two stolen and /bought national elections ..and even after knowing this to be true, we are naive ( democratic ) enough to pin hopes on A Good outcome..come November.. 'when we can 'let our vote do the talking for us ?? Haven`t we realized even yet..that this Bushite administration has had two stolen, unearned elections already that prove they have become marvels at this tactic ? Good advice you get here. But the only action those people understand is Dirty warfare right back in their faces. So, All of you 'repubs' who have now become secret "Liberal-leaning democrats'..Come OUT of the closet and start voting with some integrity and foresight. No one is going to line you up in front of that closet door and take aim at you for waking up.. Finally ! They say that ' the third time is Charm !' Help make it So. Do the Democratic thing, Kick that bunch of war mongers right out on their fat behinds, and help turn this country Back over to The People Where it Should be. ( ' the republic for which we stand.') vgf