Scared Repugs Ratchet Up the Terrorist Rhetoric in the Wake of Lamont's Victory. Get Ready for Some Serious Ugliness 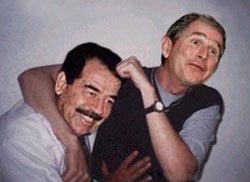 The Republican Party is running scared in the aftermath of anti-war challenger Ned Lamont's upset victory in Tuesday's Democratic primary, and the political consequences it could reap on GOP incumbents in November's midterm elections. The spin machine was on overdrive Wednesday, with Republican National Committee Chairman Ken Mehlman taking the lead in spewing the incendiary rhetoric about the war in Iraq and its connection, according to the Busheviks, to the war on terror.

With new polls that show that 60% of Americans are against the war, no longer can Karl Rove, Mehlman and the Repuglican talking heads label the anti-war Democrats as "fringe" candidates who represent their party's "extreme wing." Not only do these candidates like Lamont speak for most of their party, but they speak for most of America as well. Polls now prove that to be against the war is to be firmly in America's mainstream. It is war-mongers like Bush, Cheney, Rumsfeld, Rice, Rove and Mehlman who are statistically out of touch with mainstream America.

Unable to regurgitate the old "fringe" rhetoric, they're quickly shifting the Swift Boat's gears back to the Iraq/bin laden/al Qaeda story. The "fight 'em over there so we don't have to fight 'em over here" bullshit. It worked like a charm in '04, and they're banking on Americans being fooled once again. The spin they'll be driving home for the next 2 1/2 months is that a pullout of Iraq will result in another 9/11-like attack here in the States. Here's what Mehlman said on Wednesday's Hardball with Chris Matthews:

"The lesson he (bin Laden) took out of Beirut when we withdrew, and out of Mogadishu when we withdrew, was that America was weak, and that attacking America would produce the political objectives he was trying to achieve. I absolutely believe that if we were to withdraw from Iraq, not on a military timetable but on a political timetable, the effect would be to embolden the terrorists and encourage more attacks against America."

Why let Osama Bin Laden or been Bush call the shots?

sigh...50% of the USA thinks we found WMD in Iraq. The repugs have been keeping us stupid enough to vote for them again. (Then there's Diebold)

Yeah, 36 yr. incumbent and head of the Defense Appropriations Committee Bill Young is back home in his district preaching the same crap. Connection between Sadam and 911, etc. The good news, we have a candidate who is 100% out of Iraq candidate to vote for, Samm Simpson. We're trying desperately to get him to debate her. She'll wipe up the floor with his senile old ass.

I'm sick and tired of them all!

Cathy
From the fight back State of Michigan

The mustard and sarin gas bombs we found in Iraq ARE weapons of mass destruction.

Remember, 60% don't want this war so that means there are still 40% out there that think this war is cool.

This country really is going to hell in a hand basket.

Polls are like statistics. They can be framed and twisted to support any desired outcome.

I don't think war is cool.
I want the war to end.
I want the soldiers to come home.
I want peace too, but my desire for peace is not going to stop radical Muslim terrorists who think its right to kill women for reading, cuts hands off women for wearing nail polish, lob missiles into Israel to kill as many innocent people as possible, or blow up commercial airplanes from the UK.

The invasion of Iraq was the right thing to do and the weak 21st century Democrats are on the wrong side of the global war against muslim radicalism.

War is not cool, but sometimes you have to stand up for freedom.

Unfortunately I live amont the 40%. There are no informative newspapers here - mostly local news and pro-Bush national and world news. They watch FOX exclusively and the trash-crime-shows on CNN and MSNBC. They never discuss politics among themselves. They go to church and still believe Pat Robertson and his kind. They happily believe that everything is in the Lord's hands and they just have to keep on going to bar-b-ques until the Rapture which takes them to heaven. Forty percent of America live in the never-never-land in their heads.

Looks like you hit the terror thing right on the head a few hours before the London news broke. Saaay, wait a minute...

Iraq had NOTHING to do with 9/11!
Get that into your head you moron!
If Bin Laden is such a huge threat then why did they disband the CIA unit responsible for tracking him?
Bush pulled everything away from finding and killing Bin Laden and set his sights on Iraq, even though Iraq NEVER attacked us.
Bush is NOT interested in catching the biggest threat to the US!
But he had no problem making a special midnight run back from his vacation to the Whitehouse to sign the Terri Schiavo bill.
But when the residents of New Orleans were drowning he couldn't be bothered, he went to a fundraiser in California instead of taking control of the situation.

OK Moron,
We don't have to let terrorists attack us from every country that we want to go on the offensive against to fight the Islamic radicals that want to make the entire world Sharia law.

Just like our invasion of France after the Japanese bombed Pearl Harbor, we would be stupid to think all of Al Qaeda will simply stay in Afghanistan so we can fight them, just because that is where they were on 9/11.

The CIA unit officially looking for OBL may have been disbanded. It does not mean we are not looking for him. We don't need to the New York Times publishing everything we are doing to look for OBL. Have you ever heard of covert operations?