Busheviks Shamelessly Exploit Brits' Competence to Mask Their Own Incompetence 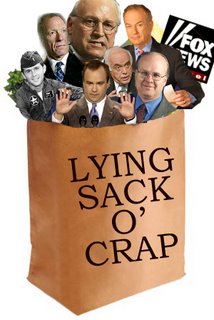 A funny thing happened this week. Britain and Pakistan masterfully thwarted a chilling new terrorist plot to hijack 10 London-to-New York airplanes and blow them up over the Atlantic using liquid explosives. But here in the United States the crafty Busheviks have been doing their sniveling best to exploit the situation for all it's worth. Besides indirectly trying to take credit, they're using this frightening new plot to bolster their civil-rights-violating neo-con agenda; further brand Democrats as weak on national security; and make it their defining "ah-ha!" moment in the critical run-up to the November midterm elections.

"Yesterday simply reiterated the importance of the approach that the administration has taken," White House Press Secretary Tony Snow said Friday. Excuse me? Exactly what approach has that been? If not for the deft intelligence of the British, we'd likely be picking thousands of body parts out of the Atlantic. While British law enforcement agencies were tracking these terrorists using sophisticated technology and intelligence, the Busheviks have us fighting a meaningless war against Sunnis and Baathist holdovers in Iraq. Sorry Tony, but most of America now agrees that your boss's approach has been a disaster, making us infinitely less safe and secure, not more.

As I had predicted, the Bushies' terrorism propaganda campaign started early in the week, before the foiled plot in London, and before Connecticut's Joe Lieberman lost to anti-war challenger Ned Lamont. MSNBC's Keith Olbermann purported that the Busheviks knew about the arrests at least a week ago, which they've since admitted, and had plenty of time to ratchet up the rhetoric. "And could it just be coincidence that the President finds out about this plot, then his Vice President and the Republican chairman start slamming Democrats for being soft on terror, then the public is informed about the plot? Could it really be just coincidence?"

What Olbermann's referring to is Republican National Committee chair Ken Mehlman's attack campaign against "weak" Democrats which began Wednesday, the day after Lieberman's loss, and the same day VP Dick Cheney held a surprisingly rare, impromptu, and voluntary conference call with reporters. Said Cheney: "...The Al Qaeda types, they clearly are betting on the proposition that ultimately they can break the will of the American people in terms of our ability to stay in the fight and complete the task. And when we see the Democratic Party reject one of its own...it would seem to say a lot about the state the party is in today if that's becoming the dominant view of the Democratic Party, the basic, fundamental notion that somehow we can retreat behind our oceans and not be actively engaged in this conflict and be safe here at home, which clearly we know we won't -- we can't be. So we have to be actively engaged not only in Afghanistan and Iraq, but on a global basis if we're going to succeed in prevailing in this long-term conflict." Cheney and Mehlman talking terror the day before the news out of Britain hits? Coincidental indeed.

Cheney also essentially declared that people who exercised their constitutional right to vote for change (ie: Connecticut's primary) are helping terrorists. Summarizing the veep's rhetoric, The Washington Post's Jonathan Weisman said, "The vice president also said the insurgency in Iraq is in its death throes, and that U.S. troops would be greeted as liberators. I'm afraid to say his utterances are losing their news value."

Given the dreadful news coming out of Iraq every day, combined with astronomical gas prices, record deficits, rising interest rates and inflation, playing up the terrorist threat is the only political card the Busheviks have left. And they're now playing it to the hilt in order to breathe new life into their illegal wiretappings, Guantanamo military tribunals, Patriot Act expansion goals and other executive power land-grabs. But where it counts in this "global war on terror" they've been woefully inept, falling far short of their British counterparts in keeping its citizens safe. It recently shut down the CIA's bin Laden unit; it's attempted to divert $6 million earmarked for development of new homeland explosives detection technology; it's ignored ten years of knowledge of terrorists' plans to use liquid explosives to blow up planes; it's failed to complete the mission in Afghanistan; and it's continuing to squander precious financial, intelligence and military resources in Iraq.

In demonstrating their success in the war on terror, the Busheviks and the Repugs like to brag that we've not been attacked since 9/11 (BTW, let's not forget there was a span of eight years between both WTC attacks). Well, the simple fact is, if not for the Brits, that misguided boasting would be coming to a very tragic end.

"...Bush said we are safer today than we were before 9/11," said Senate Minority Leader Harry Reid (NV). "But if one looks around the world today, he could not be further from the truth."
Posted by The Ostroy Report at 8:42 PM

It's nice to see one journo delivering a swift kick to the nuts, but even that, like the entire left blogosphere, disappoints; no one has seen fit to recall KKKarl's taunt that Dems saw the 9/11 attack and wanted to respond with subpoenas and therapy. Ever since I awoke to the news of the busted plot, I've been dreaming that someone would use it for a bat and knock that fat evil pissant's filthy head right off its blubbery perch. Every Dem, every lefty blogger and every journo with a lick of sense should be branding this on his pastywhite cheeks every chance they get, POLICE WORK IS THE ANSWER, YOU FUCKING MORON. I can't believe I'm the only person in the country that put that toghter from the first instant I heard about it. I can't believe that the WH hasn't been rocked with sneers and catcalls.

Anybody who wants to get a sense of what to expect from the coming decades should study the Irish Republican Army's 30 year campaign to kick the British off the island of Ireland, and the British response. Study other movements that used violence, like union organizers and anarchists. The BushCo talk about terra like it's something brand new, probably so they could use it as a pretext for these wars they want so much. Putting these berserk suiciders into a historical or familiar context is an important part of destroying the White House narrative.

Wise people have said from the beginning of this that we are not at war - except in the sense of "war on poverty" "war on drugs", etc. They have said that we need to rely of POLICE WORK and COVERT INELLIGENCE. If not, we'll just have to bomb that part of England where these most recent obvious terrorists live. And, since those people let them stay there too bad if they get bombed out too. They should have gotten rid of those terrorists. That's the "we're at war against terorrists" method of handling it.

And every time this Administraiton lies its rating goes up in the polls. Makes you want to stop the waste of money in Iraq and spend all it takes to improve the schools, education and the level of thinking in this country.

I just heard the former Republican governor of NJ say on TV that this terrorist plot with the liquid bomb had been in planning for years. How is that possible? The men involved are twenty years old. Hardly experienced and sophisticated. How could they quickly and secretly assemble the liquid bomb onboard and be assured of success with no actual experience Where had they been trained? London? Are these "know it alls" who appear on TV to keep us informed all liars,ignorant fools, lazy good-for-nothings or just so vain they want to "dazzle" during their "star turn" on TV.

Perhaps the Cheney administration needed a WELL TIMED event to change the narrative and keep the proles in line. Cable news has been telling us all weekend that we MAY have all died, at least that's the theme from the American versions of Pravda. Faux spews has been foaming at the mouth like rabid dogs.
But the fact remains, the alleged attack wasn't imminent, OUR government pressured the British(for political reasons) and now the Fox "news" watching sheeple are convinced that without Bush and his rubber stamp congress WE ARE ALL GOING TO DIE......unless we give them free reign to shred the constitution. The real message is....vote Democratic, and DIE!!!!!!! And our "free press" falls in line again. Welcome to the Rovian/Cheney vision of Amerika.