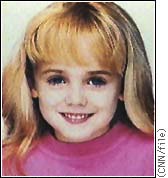 We don't often explore the non-political here, but there's something that's grabbed us and needs to be stated. How sad, how ironic, how utterly wrong it is that after 10 years of cruel suspicion for the heinous murder of her then-6-year old daughter JonBenet in 1996, Patsy Ramsey is not alive to experience her vindication and have closure on this tragic chapter of her life. For the nine years following JonBenet's death, before her death last year, Patsy, and husband John, were vilified by law enforcement agencies and the media in a cruel conspiracy of accusation. The worst thing in the world as a parent is the death of a child. Next to that is being accused of being responsible. That Patsy is not alive today to face her child's killer and be seen as nothing more than a horribly grieving mother of a brutally murdered child is a crime in and of itself.
Posted by The Ostroy Report at 9:24 AM

Can't we blame this on Bush?

Cathy
from the Genital Warts Infested state of Michigan

Cathy you just know the wingnuts would if Clinton was in office, hell they still blame Clinton for everything from HIV to Genital Warts.


Johnny
from the old farts state of Florida where the average age is deceased.

I blame Bush for my distrust in every single news report. A profiler, Van Standt (sp?) said on MSNBC this morning that they haven't yet explained how this stranger had the time to stay in the house long enough to write the very lengthy note demanding just the amount Mr. Ramsey had just received as his Christmas bonus; how the killer murdered and then had the time to move the body from her upstairs bedroom to a remote spot in the basement and remain undetected and of course, if he went in the basement window how he moved all though the house to the top bedroom and back without being caught. Maybe this guy got caught red-handed with other crimes and they made a deal with him for no death if he confessed to this murder. If not, I'd like answers.

I blame Bush for my distrust in every single news report. A profiler, Van Standt (sp?) said on MSNBC this morning that they haven't yet explained how this stranger had the time to stay in the house long enough to write the very lengthy note demanding just the amount Mr. Ramsey had just received as his Christmas bonus; how the killer murdered and then had the time to move the body from her upstairs bedroom to a remote spot in the basement and remain undetected and of course, if he went in the basement window how he moved all though the house to the top bedroom and back without being caught. Maybe this guy got caught red-handed with other crimes and they made a deal with him for no death if he confessed to this murder. If not, I'd like answers.

Karr may well have murdered JonBenet, and all sympathies go out to the Ramsey's, but confessions are hardly conclusive. The reliability of Karr's account is highly questionable based on the little information that has been released about his correspondence with Mrs. Ramsey. On CNN this bit of info was released:
"Karr's ex-wife, Lara Karr, told KGO-TV in California that she does not believe her former husband killed JonBenet because he was with her in Alabama at the time." This doesn't prove anything either way. But it is amazing how a story immediately becomes fact when the media covers it. Like the liquid bomb plot. We learn days later that the plotters had no passports or tickets. But the media and the admin played up the immediate threat. It was hard not to assume that the attack was days away, as Jon Stewart pointed out in his send-up of CNN's "TARGET: USA"

its easy to say the attack wasn't going to happen, but then those same people would be asking, "what did they know?" and "when did they know it?" if an attack did happen.

No doubt, no doubt. The point is that admin and the complicit media, essentially said that the attackers were on their way to the airport, when the British had clearly stated that this was not the case.

3:27 I'd like to add Armstrong Williams to your list. He was hired by this administrtion to secretly support the White House's policies when he, Williams, appeared on talk and news shows. There were others on the propaganda payroll and pobably still are.

The handwriting on the "ransom" note could NOT be ruled out as NOT Patsy Ramsey's. The intimate knowledge of how much John made is NOT a passive coincidence. No footprints in the snow and mud. Over stressed, perfectionistic, chemo brained mom (yes. Patsy had chemo previous to JB's death)... event during the holidays...huge lifestyle and social prominence factor to protect...JonBenet's bedwetting problems...no weapon found that could break a skull (read side of the bathtub)...screwed up investigation by police...hmmmm...
No deathbed confession, at least to the public, and none to be given out because it makes Mr. Ramsey an accessory...hmmm. Then the media gives countless hours to this Karr yo-yo instead of the Conyers' report on how many laws have been broken by the Bush Miss-administration.

Want a good plausible account of the Ramsey murder? Check out the book written by one of the Boulder detectives on the case and listen very closely to Cyrl Wecht and Henry Lee. HMMMM

Want information on Bush's crimes?You've got nowhere but the internet and the likes of Buzzflash.com. The MSM has long ago shot their credibility in the foot and buried it.

Loved the comment on blaming it on Clinton. The Republicans are so moronic.

Sorry Ostroy, my money's on Mommy Dearest and the sad thing is, if "someone" had done the right thing...and sought immediate medical help, there's a good chance JonBenet could be alive.

Now what's gonna help the country out of it's quagmire of Bush crimes? Certainly, not 5,000 more hours of coverage on the Ramsey case. But what a sensationalistic story to divert everyone's attention from the country's mess.

I agree with 4:45 and I think we should switch to Bush and forget the Benet crime. However I just want to say that I thought at the time and I think now it was her eleven (or around that age) year old brother who did it and the family helped to cover his crime with the letter and all the other trappings. He was extremely jealous of her and he was a weird kid too I read.

JOHNNY THINKS HE'S CUTE. HE WRITES IN MY NAME.

DON'T BELIEVE ANYTHING WRITTEN IN MY NAME THAT IS AGAINST GETTING RID OF BUSH.

WHAT'S THE MATTER JOHNNY? ARE YOU A CHICKEN TO WRITE THAT DISGUSTING STUFF YOU SEND IN MY NAME?

Cathy, it's not "johnny" using your name - it's Larry. Larry was using Ostroy's name too, as well as Johnny's. Don't you recognize Larry's style? He's still writes but he's now using different names.

tHIS CARR GUY DID NOT KILL HER. HE IS MENTALLY DISTURBED, BESIDES HE IS CONFUSED ABOUT HIS SEXUALITY. hE WANTS TO BE PUT AWAY OR DIE. HE HAS NEVER SAID ONE WAY OR ANOTHER THAT HE DID IT, HE JUST BEATS AROUND THE BUSH. THE CORONER CYRIL WECHT STILL THINKS THE PARENTS ARE TO BLAME.

My sympathy goes out to the Ramsey family for their loss, but if they would have taken the polygraph test as requested the 'umbrella of suspicion' wouldn't have been focused on them all these years, and the investigation would have moved forward.
John Walsh took a polygraph test when he and his wife reported their son Adam missing.
Marc Klass took a polygraph when his daughter Polly was reported missing.
Elizabeth Smarts father took a polygraph test.This was one case where the ending wasn't a tragedy.
I'm assuming the wives with the respective spouses also took the test.
It was the Ramsey's constitutional right not to take the test,but perhaps this could have already been solved long ago if they would have cooperated more.

Whats really ironic is that no one can make sense of this latest chapter. Keep your hats on as I believe that Patsy Ramsey possibility had quite a bit to do with what happened. John Ramsey is said to be ready to leave the country. Could it be that Patsy gave a deathbed confession? I'd put money on it!

When this story first broke, I will admit to feeling guilty as hell for having said, at the time, that my money was on Patsy.

I can understand most people, especially, these days, lawyering up at the first sight of police on the doorstep. But not when your kid is missing and/or dead and you had nothing to do with it.

This Karr fellow, as weird and creepy as he comes across, probably had nothing to do with JonBenet's death. Nevertheless, I hope to hell that every stage mom and/or dad, gets a real good look at this creep and realizes that little girls, prancing aound a stage in "hot outfits," are perfect targets for degenrates like him.

"Cathy you just know the wingnuts would if Clinton was in office, hell they still blame Clinton for everything from HIV to Genital Warts"

Only Clinton would know about Genital warts......

Smoke screen....don't worry about what other atrocities are being commited at this very minute!! Look a 10 year old crime has been well...not really solved. Why wouldn't a creepy pedophile prefer to be in a American prison as opposed to a prison in Singapore???
As this unravels like the bunch of hooey it is, we can all focus on more issues that affect us all. How many children die every day that are not little painted beauty dolls? Do any of us even know the name of a single dead child in Lebanon or Palestine or Africa or anywhere else on the globe..I think not. Truly pathetic.

Is it a coincidence that the bogus "confession" and arrest of Karr happened at the exact right time to obliterate news stories about Bush's warrantless wiretapping being ruled unconstitutional and illegal?

I don't think so.

So we learn today that the evidence is so weak that Karr will not even be formally accused of the murder. Of course it is ridiculous to suggest that this was all a conspiracy to distract us from all the Bush mess. But what is revealing is the way the media and blogosphere initially gobbled up this nut's confession without any critical questioning. It's the same mindset that plays up only the information that supports a political or strategic campaign while ignoring or suppressing any contradictory findings. Simple explanation: lot's of us are pretty stupid, and ready to hear what we want to hear-- be that the moronic idea that Bush ordered the 9/11 attacks or the facist smear campaign the Bushies have launched on all critics of the war.