It's the Busheviks Who are Terrorizing America 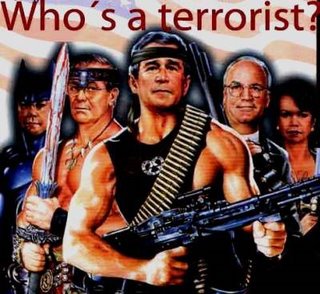 We are indeed in a war with terrorists. We are being terrorized by the Bush administration. Playing the only political card they have left, the Busheviks have moved the war on terror to the top of their agenda, using VP Dick Cheney, RNC chair Ken Mehlman, Congressman, Senators, media spinners and the president himself to scare the bajeesus out of America in a desperate and pathetic attempt to repeat their successes of '02 and '04. Although we're not sure for how long, the thwarted British terror plot last week breathed new life into a dead presidency and gave the Republican-controlled Congress reason to believe they could retain power. But two new polls out last week spell serious t-r-o-u-b-l-e for Repugs, and as a result we can expect more and more political terrorizing here at home between now and November.

In the Associated Press/Ipsos poll, Bush's approval rating fell to his administration-lowest 33%. Voters criticized his handling of nearly every issue, from the Iraq war to foreign policy, and he lost critical support in the Republican-friendly South (34% from 43%) as well as with '04 voters, 19% of whom said they're ready to vote Democrat in the Congressional mid-terms this Fall. These one-time voters are largely female, low-to-middle-income moderates from the Midwest and Northeast...voters the GOP desperately needs to stay in power.

Most alarming in the AP/Ipsos poll was the commanding 18-point (55-37%)lead Democrats hold over Republicans going into the elections. Voters are solidly behind changing control of Congress. Democrats also have an 18-point lead (48%-30%) according to last week's Fox News poll.

To be sure, the Busheviks are very, very good at divide and conquer; at winning the us vs. them war. They're masterful at framing a wedge-issue debate against outlandish claims that put Democrats' backs to the wall. This is evident in how they push their ultra-conservative agenda (Repuglicans are people of faith, while Liberals are not) and their war on terror (to be against the Busheviks' illegal wiretappings, military tribunals, Patriot Act and Iraq war is to be unpatriotic and weak on defense and national security).

The worse the war gets, the more the "unpatriotic/weak on defense" rhetoric we'll be hearing. And the closer we get to November, the more we'll hear about the threat of terrorist attack here at home. Is there any sane individual out there who does not think in the campaign's last days and weeks we're going to have terror alerts; announcements of "foiled plots;" curiously unexplained airport shutdowns which cause havoc for the TV cameras; Bush/Cheney press conferences warning of our continued threat; and lots, and lots of Democrat-bashing?

Let's hope voters see through all the smoke and mirrors this time. Let's hope voters realize it was on Bush's watch that 9/11 occurred. That he's created a breeding-ground for terrorists in Iraq. That took his eye of Afghanistan and let the Taliban and al Qaeda reconstitute. That he shut down the CIA's exclusive bin Laden unit. That, if not for Britain and Pakistan, we'd be experiencing another horrific attack shortly. That we are most definitely not safer since 9/11, as Bush boasted last week.
Posted by The Ostroy Report at 7:45 AM

The weak democrats have become to unravel. Next stop: cheering for Al Qaeda.

How many seats will the dems win in November? hmmm...let's see, they're already down one seat once Lieberman wins his landslide election as an independent.

Maybe OBL can run as a democrat this fall.

Joe “I don’t like my party any more if I can’t win” LIEberman is going down this fall. He’s pissed off way too many loyal Democrats in CT and he has no support from the party base. The ones that will support him are just like him, sore losers and mostly republicans.

All Ned has to do is play back the many times LIEberman kept boasting about what a great Democrat he is and how loyal he is to the party. He got beat like a Kentucky mule and now he could care less about the party, what an ass he is. People are fed up with these types of people and November will be a rude awakening for many entrenched politicians.

Whistling past the graveyard, eh, Mary?

the Democrats suck just as much as the "repugs"...hell even more they cant even get it together to win.which ever of the 2 parties gets in it will be more of the same...a plunder party.shoot they want a piece of the pie too.and that pie is bigger then ever. when is America going to wake up and elect a real president? its time to end the 2 party dictatorship that has made us the most hated country in the world. see the big picture.."pan out". don't be fooled by the media's micro vision. we are a disgrace.America is lost in a glutton of consuming..we have been dumbed down to the point of being some type of slave..i say dumb because they don't even need a whip anymore. vote someone , vote anyone else in ...no real american could act like these clowns.

Ralph, my Patriotic yellow Lab, reports that there are NO Stolen Cropdusters being flown by Strange Arab pilots anywhere in sight.

He's getting old and would like to come down off the roof now. I believe poor Ralph is a Republican and like you...I am very worried about him .

and Good luck Humping On that Terror Thingy.