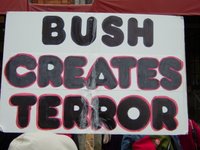 Can someone please explain this phenomenon to me: President Bush and his cohorts have spent the last 5 years blubbering on about how safe we are from terrorists, citing the fact we've not been attacked again since 9/11 as the proof. Yet, with no involvement from the United States, Great Britain recently thwarted an al Qaeda plot to blow up ten London-to-NY commercial airliners over the Atlantic Ocean. Sounds like Bush fell asleep at the wheel, no? Had it not been for the Brits, we'd likely be picking thousands of body parts out of the Atlantic by now as the result of this catastrophic terrorist attack. But somehow in the ensuing two weeks Bush's poll numbers on his handling of terrorism have increased, climbing 8% according to USA Today/Gallup.

What is going on here? What is it about this president's colossal failings that Americans just can't seem to grasp when it comes to keeping America safe? Do they realize the horror we'd soon be facing, if not already, if not for the keen sleuthing in England? Don't these circumstances warrant a precipitous drop in his numbers? Maybe it's because, as they've done since 9/11, the Busheviks have endlessly lied to the American people. Case in point, House Speaker J. Dennis Hastert's recent comments about America's role in the thwarted attack earlier this month: ..."Our terrorist surveillance programs are critical to fighting the war on terror and saved the day by foiling the London terror plot." I wonder how happy Tony Blair is to know that the United States "saved the day."
Posted by The Ostroy Report at 5:53 PM

Have I told you lately just how much I hate Bush and his ilk?

I think I discovered the mystery of the poll rise today. The yearly treatment for termites was due so I spent a considrable amount of time talking to one of the men on the job. He's for Bush. He's for our staying in Iraq so they won't get us over here. I found out he works about eighty hours a week to earn a living. He doesn't have time to read blogs, watch TV or read papers. His news comes from his preacher, and Limbaugh-type talk shows he listens to driving from job to job all over the state. We have got to somehow get information to these people. They are not stupid; they're overworked and isolated. THe right-wing shows are all that's available here in the South. It's a matter of their hearing the truth. I don't know how that can be arranged. It's as though they're trapped in a totalitarian country with only propaganda to hear.

I take it you mean that they thwarted some more dumb patsies in yet another political fear campagin.

This is the second or third time I have read or heard about Hastert's ridiculous assertion. YET, I have not heard about one Dem call him on it. Chicken hawk repugs, chicken shit dems.

The previous comment was correct. Mainstream news is inaccurate and caters strictly to the propaganda machine.

5:38 hit the nail on the head about stupid people, they are every where especially here in the south. The radio stations here in the Tampa area except for the one NPR station is right wing, religious, hate radio 24/7. If it’s not that it’s sports radio, like anyone gives a damn on what the Bucs are doing. The only morning radio show on AM is Imus and thank goodness I have a short drive because how many times can you listen to the same guests like McPain, LIEberman and Biden over and over again. This morning he at least had Tom Friedman on but the rest of his program is crap.

To prove a point on stupid people, yesterday I struck up a conversation with one of our very astute engineers about global warming. The conversation started by Peter saying that its been found that the CO2 on Mars has increased. I said who the hell cares about Mars, who lives their and why would we be concerned? He came back that all this global warming is crap from the likes of Gore and Hillary, yadi, yadi yadi. I asked him where HE got his information from and like we could have guessed, FOX news, right wing radio etc,. All I could tell him was that he really disappointed me and that I had “thought” he was an intelligent person until he talked like that.

There should be a war on stupid people in this country but if we killed all of them off there would only be a third of the population left, if even that many. Forest Gump seems to come to mind.

From the once okay state of Florida, now known as the state of confusion.

Re: Johnny said: I heard Friedman on Imus this morning and still find him disgusting. He was for the Iraq invasion from the beginning and supported Bush to the point that I had to stop reading his biased column over two years ago. He tried to vindicate himself this a.m. as does Hillary, but he was for the war and cheered as it progressed.

10:11 you’re absolutely right on about ANY of these “so called” intelligent people that bought the Bush BS about going into Iraq. ANY ONE (Kerry, Hillary, McCain, Powell, Lieberman, Biden) that believed this idiot for his reasons for starting a war for Gods sake need not even think about saying that knowing what we know NOW they would NOT have voted for it or in Friedman’s case backed it.

Most of us are just average smucks on the street and WE knew this was a terrible mistake, yet at the time when I (we) bitched about what Bush was about to do all hell broke loose on me (us) for being “un-american” and for the “terrorists”. I can remember all of the cheering and flag waving and oh we’ll be welcome with open arms. The military was all pumped up to go over there and kick ass and come home heros. I posted articles in my office of anti-war and anti-Bush and that even got some very negative remarks, how could I be SO un-american, so not behind this president and so not supporting our troops. The best I could get across at the time was this was a grave mistake and I WILL be proven right in my thinking. These very same people are now upset about the lives lost and what has happened to our standings world wide, too little TOO LATE! Now I’m in the drivers seat, I can tell these people “I TOLD YOU SO!” and how stupid they were to fall for such a line of BS.

Johnny,
You think you are so hot. But you are not.

Cathy,
From the once great state of Michigan, where people die every day because of Bush.