New Poll Shows Over One-Third of Americans Believe U.S. Government was Involved in the September 11 Attack 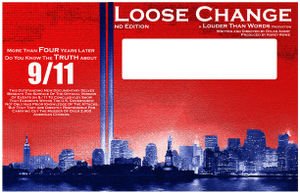 9/11 conspiracy theorists got a big boost this week upon the release of a new Scripps Howard/Ohio University poll indicating that voters trust the Bush administration less than ever over the events surrounding the September 11 attack. A startling 36% of respondents said it is "very likely" or "somewhat likely" that the Busheviks either participated in the attacks on the World Trade Center and the Pentagon or failed to take precautions that could have prevented them "because they wanted the United States to go to war in the Middle East." What's more, the survey also found that 16% believe that secretly planted explosives, not burning passenger jets, were the cause of the Towers' ultimate collapse. We're not talking some crackpot group of mystery-novel readers here; we're talking over a third of the nation.

According to experts, what we might be seeing here is part of the long-awaited backlash from voters angry with the Bushevik deception about the war in Iraq and the WMD lies. University of Florida Law Professor Mark Fenster, author of the book "Conspiracy Theories: Secrecy and Power in American Culture," pointed to the public's growing distrust of the Bush administration, which has lost whatever credibility it had after 9/11 and at the outset of the war.

"What has amazed me is not that there are conspiracy theories, but that they didn't seem to be getting any purchase among the American public until the last year or so," Fenster said.

Further fueling the conspiracy theorists' passions is a documentary, Loose Change (part 1 and part 2), written and directed by Dylan Avery, which uses 9/11 footage, interviews and public documents to theorize that the attacks were not the result of terrorism but a series of cleverly executed events perpetrated by the Busheviks in their quest to justify an invasion of Iraq.

Many of us, despite our general distrust and disdain for the Busheviks, still find it hard to believe that they could possibly have been involved, on any level, with either the planning, execution, or willful negligence of the 9/11 attacks. At least our sense of decency and right and wrong says it couldn't be possible. But with their track-record of lies, deception, criminality and an insatiable hunger for power and legacy, let's just say that anything's possible.
Posted by The Ostroy Report at 8:32 PM

Count me as one that thinks they either let it happen, or were involved. It's stupid to think otherwise.

A lot of people beleive that the government was involved on 911, I am one of them, I hope that this leads people who dont beleve to do more research, because the ignorance displayed when shooting down the idea, is their biggest weapon against us.

Not sure what can be done about any of it, but the truth is liberating.

Well, it's just my opinion but I think the notion that the government conspired to cause 9/11 is a preposterous idea.
I have a low opinion of this administration but I don't believe they would willingly participate in such a scheme.
I do believe that gross negligience, incompetence and hubris prevented the Bush NSC from following up on known information about terrorists and their organization. They painted the previous administration with such a tarred brush they didn't think this stockpile of intelligence was reliable. Thus they were caught flat footed, even as some in the intelligence community had tried to warn about terror plots.

mr.Neely, Do you also believe Lee Harvey Oswald was the lone gunman who shot Kennedy? You need to do some research. I suggest going to:
septembereleventh.org,
reopen911.org and lonelantern.org for starters. "This is the end of the innocence".

At first it seemed like negligence, but soon after some research, it was hard to deny.

The hole in the pentagon?
No video proof to release? from the PENTAGON!? (they have cameras everywhere)

Three buildings fell flat to the ground that day, official cause was "fire" , they were the FIRST in history to fall from being on fire.


Im just saying, dont close the door on the possibility of a government doing things to hurt a small group of its citizens, in order to acheive their goals.
(operation northwoods)

if you do some research...
you will find that the official story quickly becomes preposterous.

So 1/3 think it was Bush, and the other 2/3 think it was Saddam: dumb and dumber. It was actually a highly motivated group of zealots, who were part of a loosely structured clandestine movement. The fact that Bush and his gang have spun it to their political and ideological benefit, makes them opportunists and morally repugnant. The fact that the gov't and intelligence branches missed putting together the clues that an attack was imminent and indentifiable players had entered the country and neglected to warn law enforcement, local goverment and even the press is a tribute to the US system of government secrecy and fear of public disclosure. But maybe the suspicion of the 1/3 who blame Bush can work as a swift boat smear for Democrats against Republicans in 2006 and beyond. We can be sure the Republis would do it if the positions were reversed. Sure has backfire potential though.

I studied Bush's face during his 7 minute trance after he found out that we were under attack. Why would he just sit there? Did he want to make sure that the damage was done? This administration has not given me any reason to believe that they were not involved in/responsible for this national tragedy.

Interesting documentary you linked to (Loose Change). For further reading I would recommend "The 9-11 Commission Report: Omissions and Distortions" by David Ray Griffin.

Thanks so much for covering this!

anonymous (1) suggests "a highly motivated group of zealots, who were part of a loosely structured clandestine movement" Question: What loosely structured zealot group has the power to shut down NORAD or plant explosives throughout WTC buildings 1,2 and 7? Or have the inside track on exactly when and where the attacks were planned to take place? Just like a Bushy type you choose to obfuscate the issue instead of actually studying the subject matter and coming to an educated decision about what happened on that fateful day. Oh yeah, did this "clandestine movement" profit hand over fist like Cheney and his criminal cohorts? Hmm...looks like you are dummest of all.

I also believe that there was something going on and they did nothing to stop it. Loose Change is an excellent movie that raises all the right questions.

After finding out the truth about who killed Kennedy, I will believe anything about this dangerous governemtn.

Cathy
From Michigan where I fight the good fight 24/7

I can buy the notion that buildings 1 & 2 fell from a combination of a huge jolt from the airliners and massive fires, but what explains the collapse of building 7.

Why were drastic measures taken to prevent any video releases of the attack on the Pentagon?

Like Bush's inaction when being told about the attack, along with his lame excuse about not wanting to frighten the school kids, these unanswered questions sure make one wonder.

its a physical impossibility!

why do people have to bring up clinton when bush is accused of something.
BUSH sucks balls.
he blew up our buildings
and murdered countless americans,
and people in other countries.

clinton and the democraps are controled by the same group of
shadow govenment ,rich ,greedy filthy pigs.if you cant see it you should be hung.

i have to write this anonmously
because i dont want the SS showing up @ my door.
if you cant see it you should be hung.

It's hard to deny the physical evidence. The buildings are in free fall. Check out the videos. There is simply no engineering model of failure that accounts for the way they fell. except one that has the steel structure cut up between the time the building is standing and the time it hits the ground. Try hamming a long nail into a two by four resting on concrete. How hard do you have to hit it for it to fall into pieces? It just doesn't happen.

Anonymous 5:54,
Why do you suggest hanging innocent people for the crime of disagreeing with your politics? It sounds like you are the one in the SS.

Politics is about what happens in our lives; how safe we are; how much money we can earn; how free we are to speak and worship; how clean our air is; how free we are to make our own decisions. It is about everything that affects us. Politics is not about which movie one thinks is better. Politics determines our very lives. Opinions are not innocent. They have a vital effect on our well-being. We'll all be better off when everybody starts taking politics seriously

Well, after 5 years somebody finally woke up. nobody knew when they wanted an investagition he didnt want it at first,that should of told you something,then by having a government investagition anybody would of known it would be just a cover-up, you have the same thing going on right now and every body is buying it with this Israel war ID like to know where the money hes giving them is comming from. HEs letting Isreal do the fighting till they get Iran involved, setting here with his cease fire crap that is just prolongingthe fighting to get Iran and Syria involvedthen he can step in and his mission is accomplished,He dont half to involve his bought off congress.Look he went around the Supreme court Justices with his lovely attorney general---not a peepout of the people.If he gets this pulled he dont need the justices or the congress either and we will have a one man government. so what do we haveto vote for except taxes and this state is running them threw Tues.

Anonymous at 11:24AM "How else do you explain the FACTS that the Clinton administration allowed Bin Laden Construction to perform the general contracting in the WTC 93 rebuilding effort?"

How about providing the source for your statement? Cheney is more complacent in this than Bush is for sure. Bin Laden planned his attack, but Cheney and his eichmann made sure it happened on a much larger scale. Some of the best evidence is WTC Building 7 that came down in a free fall. Larry Silverstein said they decided to pull the building. It would have taken at least 24 hours to line a building of that size with explosives to implode it. I am not sure exactly which members of the Bush administration had foreknowledge, but am attack of this magnitude absolutely had help from high ranking members within our government. No reason is good enough for the President of the United States to not want a full investigation into every agency in charge of protecting the citizens. Not one!

Anon 8:24,
The general contracting of WTC 93 is public information. Go find it yourself, I'm too busy in other threads helping you libs learn how to access the library of congress to determine voting records.

How about providing the source for your 'facts'?

I have a degree in Mechanical Engineering and extensive work experience in the field of strength of materials, construction and metallurgy. I can tell you with 100% certainty that building # 7 at the World Trade Center fell as a result of controlled demolition charges. My level of certainty for the two large towers is closer to 99.9% that they too fell from controlled demolition charges.

Mr. Flash,
Can you enlighten us using formulas and legitimate calculations to prove your levels of certainty?