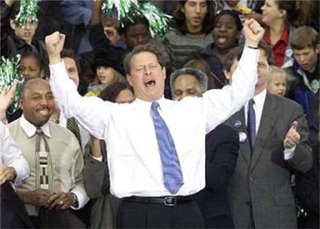 A new Time Magazine poll shows two very interesting things: despite her incessant triangulating and centrist-searching positions as she gears up for the 2008 presidential election, Hillary Clinton remains the top choice (46%) among voters, but not by much. The Comeback Kid, Al Gore, is hot on her trail (41%) in what could be shaping up as a major battle of the Clinton administration spin-offs for the Democratic nomination.

Gore has waited his whole life for this moment. The country is in a state of domestic and foreign policy disarray, and voters are frustrated, angry and ready for change. On the national level, recent Rasmussen and Fox News polls show Democrats with a commanding 18-point lead over Republicans, indicating that the Dems could sweep into the House and Senate much as the GOP did during its 1994 Republican Revolution. Voters are that upset. While many key Democrats are excited about a Hillary candidacy at the primary level, there is still considerable doubt that she can win the general election. The Time poll shows she remains an unpopular, polarizing figure among Republicans and an appreciable amount of Independents; and voters on both sides question her ability to keep America safe from terrorists (67% of Dems, 17% Repubs think she can). Writes Time Magazine, "Most of us agree that she's smart, and there's no doubt she wants to win. Does that mean she will figure out how to get red America to see her softer side, or does that mean she'll quit before she can lose?"

Which brings us back to Gore. As we've said many times, he's got an impressive resume, a fiery new personality, and anti-war/pro-environment messages that resonates with most of the country right now. And he's a winner, having snagged the popular vote in 2000 and, as many believe, the electoral college as well. To date, he's played it coy in denying he's running, but he's also calculatingly left the door open. For Gore right now, that door is wide open, and it's full of opportunity. The question is when, not if, Gore makes it official.
Posted by The Ostroy Report at 7:28 AM

I like Hillary and Gore, but if Hillary can't get elected by the voters at large what does it matter?

Cathy
From the proud State of Michigan

Look, Al Gore is the ONLY Democrat that can win in 2008, PERIOD! When you listen to him speak and see the difference between now and 2000 you can see he’s got his game plan all set and ready to put it put it in high gear. He has said that one of his mistakes in 2000 was listening to his “handlers” and you know that will never happen again. He has stated that he has learned to speak the truth on matters and not tell people what “they” want to hear. If the environment is screwed up say so, don’t try and “sugar coat” it, the same goes for all the other issues we have.

By next year this invasion of Iraq will be really big and Al was against it from the beginning, not a flip flopper like Hillary, Kerry, Biden, and the rest. Now all signs are that Bush wants nothing more than to go into Iran before he leaves office and if this country lets that happen then god help us all, even Gore won’t be able to get us out of that predicament.

I still look for Al Gore to run and some “dark horse” candidate perhaps not even in politics now to be VP, say perhaps a Bill Moyer or Tom Friedman kind of person? All bets are off in 2008 especially if the voting machines aren’t fixed by then, oh wait a minute they already ARE “fixed”.

From the state of Florida where the Early Bird Specials started.

Hillary doesn't have a chance and we'll be throwing away the Presidency if she's the candidate. She's despised in the South by both Dems and Republicans. Not only that, a woman doesn't have a chance as yet to be elected President of the USA. It just is not about to happen. And, then on top of that she's a chameleon with no scruples at all about siding with anything or anybody that she thinks will get her elected. Even beyond that she is not "smart". She voted for the war and didn't "see through" Bush as so many of us did. And, do we really want "two for the price of one" -- Hillary and Bill? I've had enough of him, too, with his welfare "reform" and sending jobs overseas. Some book or article I read recently put Bill to the "right" of Eisenhower and Nixon. We need Gore. And we need to stop the invasion of Iran.

Johnny -- Did you read Tom Friendman from the beginning of the Iraq invasion He was for the war and would have voted "yes." He's been for it almost continually since then and he has been on Bush's side too often to be a Dem. candidate for v.p. But you're right about everything else.

Yeah, and if the Bushies keep fucking around with Katherine Harris, she may spill all the air in her lungs right into the big fat whistle she's holding.

Bottom line, I want Gore, with someone as unlike Joe Lieberman as we can find for a running mate. I think Gore would have to be sincerely and overwhelmingly drafted, and as such he could be a unifying figure for the party and the nation. I don't hate Hillary Clinton, and I certainly don't understand why she's such a lightning rod, aside from the diabolical Mellon-Scaife hatred of America, the only motivation for the vast right-wing conspiracy that seems plausible to me.

On reflection, I think we have to understand that anyone we run will be subject to the sort of attack that was levelled at Clinton, and maybe that has to be part of our calculation, assessing relative immunity or vulnerability of every candidate to that sort of attack.

Bush's sub 40% approval since Katrina is being spun by the GOP media machine in two ways: 1) the Democrats aren't doing anything. 2) the Democrats don't 'have a plan' on Iraq.

First, the Democrats do not have any power in DC except the Senate filibuster, yet they have used that power effectively. The middling pension legislation (move everyone to cash balacne plans) is an example of something that would have been a lot worse without that threat. Frist's estate tax plans and $100 gsa rebate plans would not have died without it as well. The Democrats are playing their weak hand quite well.

2) The Democrats have different ideas about withdrawl timetables on Iraq, but that's OK. They don't need 'a plan' for Iraq. The punishment of Bush's party during the upcoming elections will teach future US leaders on the judicious and well-planned use of force. Iraq is a mess, no plan by Bush is making it better. They screwed it up with their no-nation-building "philosophy." They deserve to lose power as punishemnt. The GOP spin machine is really desperate right now, deservedly so.

What is stopping Gore? is it possible he just does not want to run again? Who would be his VP? Agree that Tom Friedman might as well be Joe Lieberman. I guess Wesley Clarke is the obvious choice, though he was weak in the last campain.

The field is wide open and I hope the next VP will be a person that can think and reason. We need a VP that is out of the main stream politics, someone different like a Dan Rather, Bill Moyers, Bill Gates, Oprah etc,.

Wesley Clarke was a Republican before he was a Democratic candidate

I like the Gates idea. Is he a real possibilty?

The way districts are presently drawn popular support might not mean much . Don't forget , republicans currently control both houses by a much larger margin than their popular support .

fingers and toes crossed for the Gores nomination also.. check this out http://www.draftgore2008.org/node/143

The priority at the moment for Democrats should be debunking H. Clinton's image as a progressive Democrat, rather than the Lieberman-style neocon she really is. The aim should be to make it so she can't possibly run.

I don't know anyone that wants Hillary Clinton to run for President. The media wants her to run and if I had to bet on it I would say they are doing the dirty work, as usual, for the GOP. They want H Clinton to run because they know they can beat her. Sheeshhh..

The ones putting Hilary out front are republicans and thier MSM hoping to defeat democrates in 2008.Gore is the only president elected in 2000.And i will vote for him in 2008,not Hilary Clinton.Don't let the other party pick our candidate,pay no attention to the motif of the right wing media lies.Vote-Vote

"She doesn't talk about the war, which she has supported, nor about Cindy Sheehan. Time and again she looks like the model Bush Lite–DLC candidate. And it works. She's getting accolades from George Will for resisting the "siren songs" of people like Sheehan."