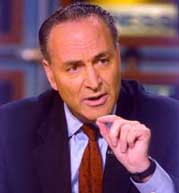 Kudos to Sen. Chuck Schumer, whose Democratic Senatorial Campaign Committee (DSCC) continues to kick the pants out of its Republican counterpart. For the month of July, the DSCC raked in $4.2 million for a total of $77.2 million for the 2006 campaign cycle, compared with the NRSC's $3.3 million July take and $65.9 million '06 total. The DSCC also reported $35.1 million cash on hand, 70% more than the NRSC's $20.6 million.

Needing just six seats to regain control of the Senate, the Democrats are feeling confident that their fundraising successes are a foreshadowing of victory in November. "Democrats are winning the fundraising race because Americans understand that we have the ideas to move the country in a new direction," Schumer said. "People who are sick of the status quo and want change are looking to the Democrats."

In addition to having a desirable candidates with a resonating message, the Democratic Party knows it cannot take back the Senate without a massive war chest. "We’ve run the DSCC like a business and marshaled our resources to ensure that we are able get our message out to the voters," Schumer said.

With just 78 days before the November 7th midterms, Democrats are canvassing the country this Summer aggressively promoting the party's "New Direction" agenda with six central goals as its cornerstone: Strengthening national security, improving jobs and wages, energy independence and lower gas prices, affordable health care and life-saving science, retirement security and college access for all. The party believes these are the issues of most concern to average Americans, who, according to recent polls by both Rasmussen and Fox News, overwhelmingly now prefer Democrats by an 18-point margin.

Let’s give Mr. Howard Dean a lot of credit for the direction of the party. Howard knows how to use the internet to get money, but more so he had the wisdom to direct money and man power to ALL the states. He said that to just give up on the so called Red states was a mistake. He said to concentrate on JUST the Senate and House races were a mistake. He has gone after all elections from dog catcher to mayor to senate and he IS making a difference in the party, he’s taking names AND he’s kicking ass.

From the once great state of Florida, where the illegals out number our gator population.

So Johnny are you going to quit being cute and using my name?

Cathy
Michigan is hurting and Johnny don't now anything about us

Let's go Democrats, romp one for the gipper!

From the once great state of New Jersey, where the smell is worse than Cathy's body odor.

Cathy:
Don't let the juvenile Repuglican cretons get ya down. And don't let 'em run ya out of town! They're on the attack with moronic statements because they're desperate and have nothing else to say. Every time one of these thugs spews their useless drivel, just think of it as a victory. How sweet it's going to be on November 8th when you, me and our friends get to read the newspapers as we take back Congress. Let the 5-year-old right-wing nutjobs self-destruct. Just ignore 'em.
Andy

Cathy, Johnny didn't use your name.It was Larry and he hasn't been around for awhile. Johnny always has good thinking behind his remarks - why attack him.

(And I'm not "Johnny" - just an observer) I think his idea of Gore/Dean is terrific. And copyng your "tag line" is complimentary.

Cathy, where in the world did I use your name (I am Johnny)? I like the idea of putting some humor in our replies and your glib about Michigan is neat and every state has it’s “thing” to either boast about or rib. I happen to live in a state that seems to get in the news a lot and most of it is for something stupid. Remember, we have two Bushes as rulers everyone else have just one Bush, now tell me that’s not a JOKE!

How people can see the spiral of the US into a fascist police state that looks more like Uzbekistan than the republic it descends from and see it as a partisan issue just baffles me. There is no difference between the lying bastards with elephants as mascots and the lying bastards with donkeys as their mascots. Look at their voting on the Iraq debacle and funding for Israel for clear evidence.

Chuck Schumer is a Zionist like the rest of them. Until US foreign policy and actions are formulated and carried out in US citizens' interest - not those of industrialists, oilmen, drug runners, and Tel Aviv - nothing is going to change. Meanwhile, your freedoms are getting spat on and flushed down the toilet because you're so anesthetized by the need to be entertained and protected that you refuse to take any steps for real change.

7:03 is right. When we stopped being a "melting pot" and became a "mosaic" or "rainbow" instead. our troubles began. There should ONE language, ONE allegiance to ONE and ONLY ONE COUNTRY - AMERICA. The requirements of citizenship should be stricter and adherence to this country should be monitored. How can an "American" allow her/his son, for example, to join another country's army when we so deperately need American soldiers. Who is supporting another country with money when we have so many civic needs in America? Look at the trouble France and the Netherlands are having for not insisting on assimilation. What happened to the glorioius idea of integration?

Rest assured, Whitehouse has many an AG skeleton in his closet the GOP will be addressing. He has a primary and the patrician will have to come past a Marine veteran who lives progressive values..

Unfortunately, both Schumer and Dean are pro-Israel "self-defense". I was very disapponted to hear Howard Dean spouting the same "self-defense" line as the NeoCons and Condi Rice.

Let's find some candidates who are not afraid to take on the Military Industrial complex death machine and start pressing companies to change their products from cluster bombs to solar panels. And stop enabling Israel to do the things its doing to Palestine & other neighbors. Our tax dollars in the form of military aid made that debacle possible, and our tax dollars are going to pay to repair the damage done by Israel to Lebanon's infrastructure.

The #1 export product of the US is weapons, bombers, the implements of death.

This world and the Democratic party need some drastic changes. Maybe we should start a Progressive Party, and gear up the Socialist and Green parties to create a little more competition for the Dems & GOP?