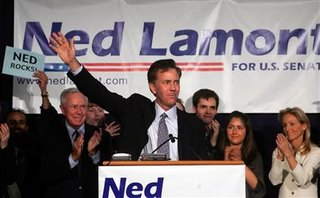 I must say, even though it's highly unlikely, unrealistic, yada, yada, yada....listening to Ned Lamont in the last 24 hours I can't help but think of what a terrific presidential candidate this guy'd make in 2008. He's smart, articulate, engaging and charismatic. He has an overall liberal, pro-business, anti-war message that resonates strongly with voters. And he's proven to be a highly effective campaigner. Plus, with all the hoopla surrounding the Connecticut race this past year, he's been afforded invaluable name-recognition. Scenario: he wins his Senate race in November, spends a highly visible year in Washington, and then, upon seeing none of the Democrat hopefuls gather any real momentum or excitement, tosses his hat into the ring; the dark horse Clinton-like wonderkind who comes out of nowhere to become the first Senator since John F. Kennedy to become president.

Stranger things have happened, kids.
Posted by The Ostroy Report at 10:42 PM

What happened to the Goracle? He's way sexier than Ned. Got way more experience, and is as good or better on all the issues. Ned's good. Let's try to get him elected Senator first. Joe-mented is going to make it a very nasty, party dividing, hurt the hand that fed him all these years, campaign.

After watching Ned in person, I could see this happening. He is sincere, humble, looks you right in the eyes, not hurrying past you to find the media or big shots.

And Annie would make such a Terrific first lady! (Of course after Laura, who wouldn't? Think of what that woman could have accomplished in 6 years!)

Nice to think about, but we need to deal with 2006 first. If we do not win back the House or enough seats to stop the way too conservative Repubs, 2008 won't mean a thing.

In Michigan the Repubs voted out a moderate congressman who happens to also be a doctor. He supported abortion rights and was not against gay rights. As he said himself after his defeat: The Republicans downfall will be their getting rid of moderates leaving only extreme right wingers in the party.

Lamont is a hand puppet for MoveOn.

I am so glad Lamont is possibly a hand puppet for MoveOn. MoveOn and he could save our country from the lying, cheating, dumb leadership we now suffer under. The extremists - the Right Wing extremetists are in power now. Those trying to get them out are normal, intelligent Americans who love our country and want to restore it to health. Lamont could lead the way.

I can't wait to see what they do for an encore.

TALK ABOUT DUMB. You try to get the candidate you have elected you nutcase. Kerry would have been better that what we've got. What was dumb on our part was not checking the voting machines and trusting that our fellow Americans, even if they're Republicans, believed in our Constitutional prinicples as we do.

Was Lamont at the Bilderberger meeting? That represents the key in knowing whether he's been selected or not.

What was really dumb (and very suspect), was Kerry conceding so quickly.

But what is even dumber is all of the dipsticks that will go vote in the next election on touch screen voting machines and leave no paper trail - over fifty million! Talk about lending your good name to a scam!

What is needed is an election boycott with a demand for hand counted paper ballots. Then you can at least say I did not participate in the scam.

No paper, no vote!

Rove called Lieberman and told him 'the boss wants to help' Look for some very dirty personal attacks on Lamont ala McCain's black baby.

I didn't see Mr. Lamont's name on the list of attendees at the recent Bilderberg meeting, but, I did see that George Pataki was expected to attend. (Eww)

Considering that Stephen Harper spoke at the 2003 meeting and that, surprise, surprise, he is now Canadian PM (and a conservative who supports Bush's wars) I guess that means that Mr. Pataki may have plenty of funding for his Prez. run in '08.

I must admit that I also briefly found myself wishing that Ned would run for president. I don't see anyone out there yet I like more. I guess we'll cross that bridge this time next year!