Al Gore and Global Warming: Both are an "Inconvenient Truth" Only if You're a Repuglican 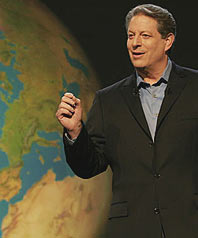 The Al Gore-inspired documentary "An Inconvenient Truth" opened across America Wednesday to a battery of highly-charged reviews. But whether or not the film gets its props or pans unfortunately depends on which side of the political aisle you're on. You'd think that the concern over the rise in natural disasters, the warming of the planet, and the raping of the environment would be a non-partisan one. Guess again.

To the left, the problem is real and grave. David Edelstein suggests in his New York Magazine review that conservatives are going to trash and bash the heck out of this film and of Gore. "That is how much of the mainstream media is likely to characterize this new documentary of Gore and his traveling global-warming slide show: Anything else would invite charges of liberal bias. But the fact is--the fact is--that only a brainwashed audience (and their brainwashers) could portray anything in "An Inconvenient Truth" as even remotely controversial. Gore has all the graphs and charts and time-lapsed photographs and peer-reviewed scientific studies he needs to underscore his message about where the planet is heading and sooner than we think. So be afraid. Be very afraid."

While the film is being harshly criticized by Repugs, it has the unwavering support of scientists. "Perhaps the most amazing statistic in "An Inconvenient Truth," writes Edelstein, "is that of 900-plus peer-reviewed studies in recognized journals, not one has challenged the idea of global warming, whereas more than 53 percent of articles in the mainstream media have presented it as a theory or been careful to include the demurrals of a tiny handful of bought-and-paid-for scientists or politicians. In the course of Gore's lecture tour comes the unsurprising news that Bush aide Philip Cooney routinely red-penciled the conclusions of impartial government scientists; when exposed, he resigned and took a job with ExxonMobil."

He closes his review with: "An Inconvenient Truth is one of the most realistic documentaries I've ever seen and, dry as it is, one of the most devastating in its implications. See it with your kids and watch closely to see who attacks it and on what grounds."

The film gets similar love from the venerable NY Times in a review by A.O Scott, who believes the documentary is not about Al Gore per se. "He is, rather, the surprisingly engaging vehicle for some very disturbing information. His explanations of complex environmental phenomena--the jet stream has always been a particularly tough one for me to grasp--are clear, and while some of the visual aids are a little corny, most of the images are stark, illuminating and powerful."

Scott is awed by the film's evidentiary impact. "I can't think of another movie in which the display of a graph elicited gasps of horror, but when the red lines showing the increasing rates of carbon-dioxide emissions and the corresponding rise in temperatures come on screen, the effect is jolting and chilling. Photographs of receding ice fields and glaciers--consequences of climate change that have already taken place--are as disturbing as speculative maps of submerged coastlines."

Gore, he said, "speaks of the need to reduce carbon-dioxide emissions as a "moral imperative," and most people who see this movie will do so out of a sense of duty, which seems to me entirely appropriate." Well now, isn't that a terrific benefit? Getting the public to actually take some environmentally-conscious action. On this merit alone the film should be lauded. "An Inconvenient Truth," he says, "is a necessary film."

Now let's take a peek at the right wingers' perspective. In Rupert Murdoch's NY Post's review, Kyle Smith starts the trashfest early: "Al Gore's global-warming documentary, "An Inconvenient Truth," is sure to get an Oscar nomination for Best Documentary, but Gore should campaign for Best Actor, too....Much of what Gore says in this slide show he gives to people whose minds are not yet fully formed (undergraduates, actors) is absurd, and his assertions often contradict each other....Look carefully at Gore's charts and you'll see that the worst horrors take place in the future of his imagination....Gore is a dangerous evangelist for whom all roads lead to his sole, holy revelation."

And in his NY Times Op-ed Tuesday, conservative John Tierney also did a hatchet job on the film, and on Gore, and reduced the overall threat of global warming to a minor nuisance, if that. He began with, "If Al Gore's new movie weren't titled "An Inconvenient Truth," I wouldn't have quite so many problems with it. He should have gone with something close to "Revenge of the Nerd." You could probably gather that it gets worse from there. The film, he said, "is a cinch to win an Oscar, and deservedly so. Getting anyone to voluntarily endure 100 minutes of Al Gore and his slides is a historic cinematic achievement."

But perhaps the most telling comment from Tierney is that he believes Gore's main strategy is to rouse voters by presenting "doomsday scenarios and ignore the evidence that civilization may just survive after all. You could ague that the ends justify the means--that only by terrifying the public can you rouse politicians into doing the right thing." This is a subject Tierney, Smith and the rest of the Repugs ought to know a lot about. Their party leaders have been shamelessly using fear and terror to scare voters ever since 9/11. That they are now turning global warming into a highly-charged partisan issue is predictable; but that they're choosing to do so in an election year with the tsunami, Katrina and Rita, and astronomical energy prices as a backdrop, is a gift horse for Democrats.
Posted by The Ostroy Report at 9:32 AM

Al Gore runs a great race when he isn't running
Is the ex-VP happy to be a selfless oracle?

Everytime someone talks about global warming with credibility and facts, it's a good thing and it hopefully makes it harder for people to pretend it doesn't exist. Thanks for the highlight.

Great article Andy. I will try to force my parents to see it with me on opening weekend. If it is the #1 box office draw, we may be able to manipulate others into seeing it as well.

The movie is really amazing, really scary and really important. Everyone should go and see this movie, take their kids, their parents, their grandparents, people they meet on the street... whatever it takes. Nothing could be more important. People need to see this movie.

If you haven't seen it yet - run, don't walk... run to see it now. what sweet salvation it would be if we actually had someone to believe and respect who didn't work for comedy central...

This movie is a nescessary documentary for all Americans to see. I applaud Al Gore for having this hit theaters. This should not be a film that is swayed by politics. It is important that Americans know the real danger or global warming. Sure, we're not all going to die tommorrow. But, Global Warming is not something that Gore could just-- make-up. This is a serious issue, and kudos to Gore. Go see it today!