It's a Great Sign When Repugs Like John Podhoretz Start Saying Gore Can't Win. In Repug-speak, That Means They're Afraid He Will 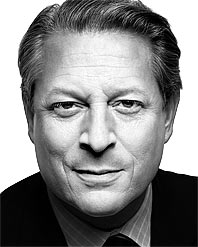 It's common knowledge in politics that when the opposition tries to marginalize you and mock your viability as a candidate, the exact opposite is true and you're the opponent they'd least like to face. Conversely, when they anoint a particular candidate as the
"frontrunner" and "the one to beat," what that actually means is that this is the candidate they really believe they can beat. And as conservative pundit John Podhoretz proves in his Friday NY Post column, such is starting to be the case with Al Gore and Hillary Clinton.

Podhoretz not only mocks Gore, but his growing legion of supporters as well."Gore's fan club clearly believes the Real Al Gore isn't the cautious Southern moderate who served as an elected politician for 22 years. Rather, Gore's defeat in 2000 let him be reborn as a kind of political holy man who speaks his heart, a fearless advocate of "inconvenient truths" that the powerful and well-connected don't want to hear...This is a Democrat-Leftist fantasy of salvation... They also desire salvation from the potential anguish of having to support a frontrunner named Clinton who voted for the war in Iraq."

Actually, I think the fantasy is all Podhoretz's and that of his Repuglican brethren. They're the ones salivating at the thought of their guy--be it McCain, Giuliani, Romney, Gingrich, etc--going head-to-head against Hillary. She's the one they want, but it's much easier to mask all that excitement and wishful thinking by claiming she's the Democrats' chosen one.

"Hillary Clinton is in a unique position in modern American political history. Polls of Democratic primary voters give her a 25-30 point edge over her closest potential rivals, Gore and John Kerry," Podhoretz states. Oh, but how quickly he forgets that Howard Dean also commanded a very early and sizable lead before the primaries began, and we all know what happened to him.

"Unless she does something to disrupt her own progress, or unless something happens in the world that makes her candidacy untenable, Hillary will be the Democratic nominee," Podhoretz opines. "And there's no doubt she will be a tougher candidate to defeat than Al Gore, whose message of onrushing global doom isn't exactly the kind of optimistic promise of a better future that resonates with voters."

It's music to my ears when I hear spinheads like Podoretz making such early and inane predictions. He doesn't realize just how transparent he is. Hate to spoil your fantasy John, but Gore's message is resonating quite well, which is precisely why he's getting incredible nationwide attention and is perceived as a very viable '08 candidate and serious threat to Hillary. But of course you already know that.
Posted by The Ostroy Report at 7:06 PM

Suppose puddnhead is in the pay of the Republicans?

I'm taking a vow starting tonight not to read another repulsican word written about Al Gore. These columists are but small lapping waters against a sandbar........they won't be able to stop the tidal wave movement called DraftGore'08!

Podhoretz? His column is already lining the birdcage! Who cares what he says?

The writer forgets that Dean was taken down by the Democratic Leadership Council, of which rightwing organization Clinton is an enthusiastic member. Clinton, Kerry, Biden, Obama, and the rest of that lot--- corporatists, militarists, imperialists to the bone---do not, will not represent the great mass of Americans who work for a living and are on the losing side of capitalism. For them (us), Russ Feingold is head and shoulders above any DLCer, but should we sacrifice him to rigged elections? What a waste that would be.

Just look for the union label.

The inventor of the internet seems to believe Howard Beale was a real person, and he is the reincarnation.

When Al Gore, Jr. watches the movie "Network", does he weep openly or simply wet himself?