Rove's Reign of Terror is Coming to an End. His Tired, Old Playbook Will Be Suicide For Repugs in November 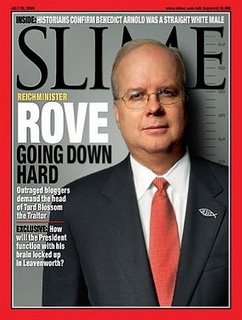 Karl Rove's gearing up for the November midterms, which a few weeks ago I thought was a very scary proposition for Democrats. But this past week he's revealed his overall strategy to win. He's got his game face on and his playbook open, and his plan is to rally Repuglicans around President Bush and the GOP's agenda. In previous years this might cause more concern for Democrats than not. But Rove is starting to appear like a sad, delusional old warrior who doesn't realize the battlefront has changed and the war is almost over. His plan of attack to keep Repugs in power is teeming with miscalculation and is destined for failure. In short, it's suicide, and it not only could spell defeat for the GOP this Fall, but it's also going to mark the official end of Rove's reign of terror.

Rove's strategy for November is to focus on national security, taxes, social security and health care, and to once again drudge up the hot-button gay marriage issue. This is wonderful plan to help Democrats, in my opinion, as it shines a very bright spotlight on everything that's been wrong in the Bushevik monarchy for the past six years.

Rove's been advising his ReTHUGlican army to get the message out that Democrats would be weak on terrorism; a GOP fundraising letter went out this week warning that the Dem's would put national security "on the back burner," and that "our worst fears" could be realized." Give it a rest already, Karl. Just take a look at your boy's poll numbers if you want to know exactly who Americans believe is weak on national security. About two-thirds of the country now believes the Iraq war was a mistake, and on Bush's watch there's been more acts of terrorism throughout the world than ever before. Osama bin Laden, Abu Masab al-Zarqawi and Khalid Shaikh Mohammed, Al Qaeda's leadership, are still on the lam and threatening the U.S. with more atrocities. The CIA's top three officials "resigned" this past week under mounting controversy, further weakening our intelligence efforts. In their bungled Dubai Ports deal, the Busheviks were ready to hand over our waterways to an Arab nation with a questionable past. And Rove himself is facing indictment over his treasonous leak of covert CIA agent Valerie Wilson's identity, an action that's severely hindered the U.S.'s ability to monitor Iran's nuclear weapons programs and put our spies, our soldiers and the nation at risk (Wilson was a WMD specialist tracking Iran's nukes). If Rove's plan is to play the national security/terrorism cards again, to quote his boss, I say, "bring it on."

On the domestic front, Rove believes the GOP's miserable failures make for a solid campaign platform. "We need to be really aggressive in explaining the sharp differences that exist between our candidates and their candidates on issues like taxes," he said. "We have to do a better job at pressing advantages that we have on Medicare, prescription drugs." Here again Rove miscalculates that voters will accept more of the Repuglican rhetoric. Has he looked at gas prices lately? Home oil prices? Consumer confidence, which is at its lowest levels in seven months? Rising interest rates, and the effect they're having on credit card and home equity loan payments? Americans' wallets are being assaulted, and they're not interested in hearing about how the Democrats have been unwilling to give fat tax breaks to the wealthiest 1% of the population.

As far as health care is concerned, more Americans are without coverage than ever before, and costs have skyrocketed. And the Medicare prescription drug program? It's been an utter failure, causing tremendous confusion and frustration among seniors. Does Rove truly think he can score points with voters by highlighting these two critical areas?

Regarding social security reform, here again the Busheviks were met with colossal failure. They lied about the program's solvency, and their plan to fix this non-existent problem was convoluted at best.

If Rove believes he can distract American voters away from these core issues once again with inflammatory terrorism rhetoric and amendments banning gay marriage, he's in for a huge surprise.

What Rove fails to realize is that his time, and the GOP's, is up. We've clearly reached a tipping point, and voters are tuning out the BS. Bush's, Cheney's and the GOP-controlled Congress's approval ratings are at all-time lows, and bashing homosexuals can't save them anymore. Americans are fed up with this administration, and with the Repuglican leadership overall. While Bush's approval rating was about 70% preceding the 2002 midterm elections, he will be no such asset to incumbents this time around. If Rove and the Repugs want to discuss the Bushies' policy failures as if they were successes, let 'em. Their delusions will help make our fantasies a realty. And let's hope that after November, Rove is either facing trial or at the very least retired from politics after devastating GOP losses.
Posted by The Ostroy Report at 7:54 AM

Could'nt have said it better myself.
Hopefully the american people have woken up to the trickery.

The Republican Cabal, which has tried to take over this country almost had their way. The courts failures to defend the Constitution starting with the Supreme Court installing this gang, the media's failure to be the watchdogs and the fear the Repubs sold to the American people kept this going for as long as it did. But, they had to move too slowly and finally the people have begun to think for themselves. The big lies, over and over again, just could not be maintained.
Rove has lost. We have won. Unless they put us into a nuclear war, their march toward dicatorship is coming apart.
They are still as dangerous as a rabid dog, but we know what to do. Vote with such huge numbers against them, that they can not steal it again. And pray that the military will not allow our country to go nuclear.
I'm not ready for the end of the world. I'm not ready to live under a dictatorship. I'm not ready to give up on America.
Fight with everything you have. Because now is the moment in history where each of us can make a difference. Not only at home, but in the world.
Vote them out!

Is there anyway that the Democrats can screw this up? Sure. Just watch them go along with Bush's plan for amnesty.