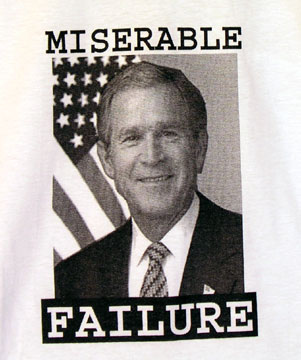 With President Bush's approval rating at 33% it comes as no surprise that his presidency, if it were to end today, would be viewed by political historians as a failure, according to a new survey by the Siena College Research Institute (SRI). In its expert opinion poll, SRI said 8 out of 10 history and political science professors put Bush's ranking at "below average" or "failure," with over two-thirds saying there's little chance for him to improve his rating.

Bush's abysmal record in office includes a failed war that's spiraling out of control; a challenged economy with skyrocketing energy costs, rising interest rates and inflation and stagnate wages; a woefully inadequate response to hurricanes Katrina and Rita; multiple criminal scandals; and potentially treasonous activity by administration officials and the president himself. As a result, he's been ostracized by his own party and has become a burden on GOPers seeking re-election in November. Both he and his overall agenda have miserably failed in the eyes of voters, Congress and the media.

The SRI survey is one of the most respected rankings of American presidents, based on a model developed by Arthur Schlesinger, Sr. over 50 years ago. In 1982 it developed its own methodology for presidential rankings.

Among the questions asked of the experts: "George W. Bush has just finished five years as President. If today were the last day of his presidency, how would you rank him?" The responses were: Great: 2%; Near Great: 5%; Average: 11%; Below Average: 24%; Failure: 58%.”

"While time is needed to fairly and accurately gauge how well any president ranks with his predecessors, George W. Bush starts with a ranking that could hardly be lower," said Thomas Kelly, professor emeritus of American studies at Siena College.
Posted by The Ostroy Report at 8:36 AM

the popup about the cost of war is interfering with my ability to read your posts. When I "ok" it, it just reappears and freezes my screen. This is too bad since I was kinked to your blog for the first time and have to avoid it now.
gdex2r@netzero.com

Off the subject, but your site is working PERFECTLY here.

Too bad we do not have confidence that the 2006 elections will be fair.

I fear that we will be stuck with Repub rule for a long time.

They will continue to destroy our country because they don't care. Many of their supporters believe that Bush will lead them to the end of the world. Sounds crazy I know, but with such low poll numbers he only has his religious base for support and some stubborn people who are blind to reality.