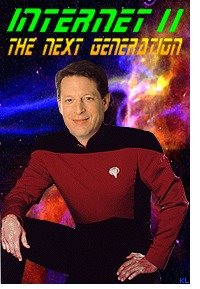 Al Gore may not have "invented" the internet per se, but he's made an enviable fortune investing in search engine and media giant Google, according to the NY Post Thursday. Columnist Deborah Orin cites "a well-placed Democrat" who claims that The Goracle owns "a ton of Google and he's made enough money that he could wait until a month before (the 2008 election) and just drop $50 million in to launch a race. He's got way more than enough money to buy this thing at any time in the process."

Gore, a close friend of Google's CEO Dr. Eric Schmidt, is widely credited with contributing to the web's early development. Repuglican folklore has it that Gore claimed to have said "I invented the internet." What he actually said was, "During my service in the United States Congress I took the initiative in creating the Internet." Big difference. What Gore did do is well-documented. As a Congressman and Senator in the '70s and '80s, Gore was instrumental in introducing computers into Congress, and sponsored bills making the federal government a catalyst for the "information superhighway." More importantly, he's credited with mandating the 1987 Reagan White House policy study of government computer networks which ultimately led to over a billion dollars being allocated towards national computer networks linking universities, schools and other institutions.

Regarding the '08 election, Orin quotes a "Gore friend" who said "He's doing what he should do if he wants to run; when you run and get the most votes as he did in 2000, I don't think psychologically you ever move on."

The Goracle, who's been getting massive media attention lately, will be in the spotlight again next week with the release of his new global warming documentary, "An Inconvenient Truth."
Posted by The Ostroy Report at 1:29 PM

Please read this months WIRED magazine for mre information about our next President.

After reading the article you have no doubt that Al Gore will be running in 2008. His star is the highest now and he has the backing of some very big guns but most important is he has the fire in his gut to run HIS campaign the way it should be run. Just tell it like it is and don't spare the horses.

This site has now become the first place I start my net surfing each day. I had no idea Al Gore had become independently wealthy. I've introduced my four kids to Current tv which they each watched at first like they were being punished. Now they watch it all the time and have been telling all their friends to watch. If Gore can capture the imagination of our college youth, the future will take care of itself.

I'll never rest easy until Mr. Gore is in the White House.

How much better off would we be if we didn't have Fascist trash like Scalia and Thomas on the Supreme Court.

It should be obvious by now that the law is only what 5 assholes on the Supreme Court interpret it to be. And now that we've seen how easy it is to come under the control of a Fascist government, one that has no respect for the Constitution and that has no problem torturing people, isn't it time for the Democrats to recognize the wisdom of the Founding Fathers and get the hell off the gun issue. When Baby Doc Bush's goon squad kicks my door down in the middle of the night because my "free speech" wasn't government approved, I want at the very least to take a couple of them with me.

President Gore? From your mouth to the voters' fingers! And please, a better Vice Presidential candidate than he tried to force on us in 2000. (No, not Hillary.)

I hope his money is enough to buy up the voting machines and get them repaired so they don't reverse people's votes.

We need Gore to get on the Net Neutrality issue.

If you didn't catch Gore on Saturday Night Live you should. I'm sure it is on the web already. I think he basically came out to run for President.

Everyone needs to believe in someone, I believe I'll have a drink!
No, none of your Kool-Aid, thankyou very much.