Bush's $300 Billion Iraq Disaster: Think of How Much Border Security That Could've Bought 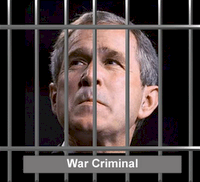 Following President Bush's immigration address Monday night it's impossible not to become even angrier than ever that he's recklessly sent 2400 U.S. soldiers to die in a war of choice that's squandered $300 billion, while the real war on terror, the threats from Iran and North Korea, and the security of our own borders have been inexcusably shortchanged. Bush's Weapon of Mass Distraction has caused infinitely more harm to our nation than Saddam Hussein ever dreamed of doing.

With the November midterms around the corner, Bush and the Republicans are desperately searching for an issue through which they could rally the base, and that's where immigration and border control comes into play. The only problem is that all this Bushevik rhetoric of the need for high-tech equipment, fences, the National Guard and border patrol agents is a painful reminder of how this irresponsible administration has shamefully wasted hundreds of billions of dollars, troops and overall military assets on an unjust, unnecessary war in Iraq against a non-existent enemy while the real threats to America have chillingly taken a backseat.

Think of how America could be protected if $300 billion was instead invested in securing our borders, waterways, airports and railways.
Posted by The Ostroy Report at 9:31 PM

Bush and his minions are throwing bones at their base. Look for the culture wars to ramp up to whip up the base to vote for them in November. The Republicans have had 6 years to get the deed done on the culture wars and they have done nothing (Thank God). I would be disgusted if I were a right winger. I don't understand why the right wingers aren't mad as hell at Bush. This is their time and Bush had done nothing.

Cathy, the right wingers ARE made at the repugs and Bush, especially the evngelicals. As a matter of fact, I am sending thank you notes to the repugs who hqve pissed them off. It just brightens my heart to know that they are frusttrated and in pain. :)