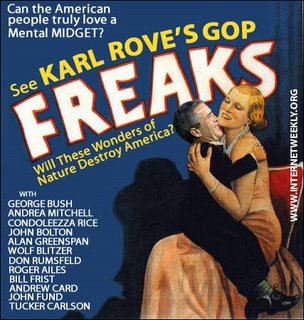 "The American people like this president. His personal approval ratings are in the 60's. Job approval is lower. And, what that says to me is, is that people like him, they respect him...he's somebody they feel a connection with, but they're just sour now on the war and that's the way it's gonna be."

Ya gotta hand it to Karl Rove. He's the most consistent, reliable liar in government today. Who cares that Bush's personal approval numbers are actually just a fraction above his embarrassingly and abysmally low 29-33% job approval ratings. Or that his likeability factor is actually at a paltry 39%. That doesn't stop old Turd Blossom from pulling figures out of thin (h)air in trying to make his embattled boss look like much less of a loser. But the repeated Rovian and Bushevik lies are no longer working. Americans are not going to suddenly like Bush because Rove tells them they do. There's only one other thing almost as pathetic as Rove's desperate attempts to bolster Bush's public image and that's First Lady Laura Bush's Stepford Wife-like denial this week of her hubby's dreadful poll numbers. (BTW, how come every single time Bush is in trouble he wheels out his wife and/or mother? How emasculating.)

A new Washington Post-ABC News poll released this week shows that voters prefer Democrats on every single issue facing the country today, from the war in Iraq, terrorism and immigration, to the economy, gas prices, healthcare, education and taxes. Those surveyed gave Bush new job approval lows, and voiced even greater dissatisfaction with the GOP-controlled House and Senate. Additionally, the "wrong track" number now stands at an astounding 69%; almost three-quarters of voters believe the country is headed in the wrong direction.

Consider these highlights from the survey:

-Bush's job approval is down to 33%, down from 38% last month
-33% approval of the job Congress is doing
-56% prefer to see Democrats in control of Congress after the November elections
-Bush's disapproval rating among Republicans is 30%, up from 15% last month; his approval rating among Republicans fell below 70% for the first time.
-Nearly nine in 10 Democrats and seven in 10 independents do not approval of Bush's job performance
-66% say the war in Iraq was a mistake
-By 2 to 1 or better, voters prefer Democrats to handle gas prices and health care.
-By double-digit margins, they prefer Democrats to handle education (23 percentage points), the budget (20 points), the economy (18 points) and protecting privacy (15 points). Democrats also had a 14-point edge on handling Iraq, immigration and taxes.
-For the first time, Democrats, by 46-41%, were the preferred party to also handle terrorism. This is a very critical change for the Repug's, who've successfully played the terrorism card since 9/11. Many pundits believe that, as terrorism goes for the GOP, so goes the GOP.

Can it get any worse for Bush and the Repugs? Let's hope so.
Posted by The Ostroy Report at 11:25 PM

Everyone dislikes him, the economy is NOT good, we are in the middle of an illegal war, and yet, people get up everyday, and walk blindly through life. why is everyone deciding now that he sux?

he didnt suck this bad when he stole the election in 2000?

he has done enough already, impeach him, the entire neocon WH, and the mainstream media should be forced to go with them all!

no one has to die tomorroW.

What I don't get is why people like Laura. She's married to the evil one, she defends his actions, she stays with him, that makes her just as evil. This is a subject that needs to be brought into the light.

Impeachment starts in the House of Representatives. It is then tried in the Senate.

For Amy above: Who controls the House and Senate? (not to mention the White House and courts)

Do you honestly think the Repubs in the House will start impeachment proceedings? In order for anything to happen we must change the House and Senate.

Also we must remember that no matter how low the polls are for Bush and the Repubs, many current Repubs in the House and Senate are in "safe seats". They are sitting in Repub majority districts. It will be up to the disgusted independents and Repubs to change these seats.

It's hard to see this happening.

What is going on now that they're using towards 2006 elections?

1) build a fence, not sure that'll be a gain in votes
2) released names of Gitmo detainees
3) Now I hear they're going to release some people from Gitmo

All in the name of votes I'm sure.

cathy,
im not disagreeing with you, they ALL need to go, but replacing them with dems, is not gonna bring about as much change as we need.

This nation has been fried because of dems and repubs alike. Impeachment is not a true option, i understand that. (by the time any kind of hearings would actually roll around hed be just about outta here anyway)

I just beleive, that this two party system is the biggest problem. Our democracy is treated like a basketball game, and the "whose team are you on?" mentality gets us no where, and its out of touch with America today. no one wants to be grouped with the "loser", so we settle. Dems settled for Bush, and so did most americans(esp right after 911).

We were not defeated by republicans, but with the help of the complacent attitude of our nation as a whole the country has been hijacked by neocons, and that frightens me, because they are on both sides of the aisle.


plus
they only need paperless machines to win in '06.

The plan to hold all the seats means packing reliable Democrats into Democrat only districts, but the Republican safe seats need to have as many Dems as possible in order to control more districts.

So Dem Seats might have a 90% Dem vote but Repug Seats will usually only "lean" Repug with only 55% 0r 60%. With a 29% approval rating an honest vote would make the average Repug seat much less "safe".

But there is that "honest" problem, when Repubs are able to vote in 150% turnout even without going to the polls, the Nov elections are much more problomatic.

That said Amy, you are falling into the Repug Propaganda lie. Dems are not perfect, and some are really bad eggs but even the worst can't match the "best?" Repug.

If ever the Dems get power again expect a big push for more purportional representation, just don't hold your breath waiting for them to manage that soon.

I fall for none of their propaganda. I beleive that voting for the dem without any regargd to who they are, and what interests they represent is the larger trap, in the bigger picture.
politicians are politicians.

GEORGE BUSH WORST SCOURGE AMERICA HAS ENDURED IN HISTORY.MY ONLY HOPE IS HE WILL HAVE TO PAY FOR HIS CRIME, IN THIS LIFE TIME.,HOW CAN HE SLEEP AT NIGHT????