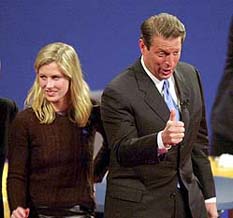 Remember the ugly "Brooks Brothers riot" of 2000, where ReTHUGlicans from out-of-state waved fists, chanted "Stop the fraud!" and pounded windows to intimidate officials in the Florida recount effort? According to Monday's NY Post Page Six column, former vice-president Al Gore's daughter Karenna said that similar aggressive intimidation tactics were perpetrated outside the veep's mansion that same year. In an interview she gave in the May issue of Avenue Magazine, Gore said "the rancor was overwhelming at times...There was this horrible mob outside the vice president's house that was recruited by political operatives. They just kept yelling 'Get out of Cheney's house.' That was really painful and rude." It's astounding that the harassment of these disruptive mobs was allowed unchecked. I'd like to know what the Democratic leadership is doing to prevent a repeat performance.

Regarding his daughter, when told by the mag's editor Pamela Gross that she'd be gracing the cover, Gore quipped "If I had half the communications skills of Karenna, I'd be halfway through my second term right now."
Posted by The Ostroy Report at 1:57 PM

But if she is such a great communicator then why did Al dump her as handler when it was obvious he was on the skids. Short memory, Al.

I remember when this happened. Tipper put the stereo speakers in the window and played loud music to drown out the "demonstrators" who were GOP hill staffers.

Vadim, the point of the post was not Gore's daughter or her communications skills. The issue was a GOP mob outside the Vice President's home. Stick to the issues, coward. If you can't do that, go suck an SUV tailpipe.

So the msm didn't report this? What a surprise. This happened in 2000.

Labeling innocent people felons, raiding the recount, The butterfly ballots And now we know no thanks to the msm, the republiklans mob were at gore's house.

The takeover of our government was well planned. msm included.

1. Who was advicing the then president clinton, not to enforce federal election laws, in spirit if not the letter of the laws? The demonstrators should have been arrested, charged and publicly identified for who they were, repugs and repug staffers.

2. Wonder how long one can be a public nuisance in front of the VP Dick's residence without law enforcement harrasment, oxymoron in this case, or at worst arrest for endangering a member of the Administration

I was there one afternoon to counter protest and spent most of the time talking to a brave anti-Vatican protestor who is an urban legend for protesting nearly every day at the nearby Vatican embassy pedophile priests. He is from Poland and was in Italy as World War II ended. He said Italy was overrum by facsist priests. I told him about the book "Unholy Trinity" which detailed how the Vatican helped the CIA bring 10,000 Nazi war criminals to the US and take over the GOP. The pedophile-serving Vatican needs Rethugs to retake control of women's bodies for its pedophiles. The Gores got a taste of Europe in the 1930s as the Vatican supported murderous, misogynist facsist mobs of "moralists." This culminated in the death camps and the ignored Catholic Croatian clergy slaughter of a million Serb "infidel abortionist" Christians! I have no doubt GOP "Brooks Brothers" would like to run death camps here. --Heil Mary

Damn good question. Where was Bill Clinton in all of this? Of course, it would have been the D.C. police that would have had to come and arrest the thugs outside the Naval Observatory, or the Park Police.

All, I can say is I will be willing to go anywhere, anytime to take on the thugs, like John Bolton, if they try this crap again.

If they want a goddamned riot they will get one, if it is left to me, and I can assure them that some of them will get hurt. Bad!

By the way, I really wouldn't expect much in the way of help from the Democrats on the Hill. They are the ones who make us all look whimpy and convince bullies that they can get away with murder.

I happen to personally know the family behind the "Brooks Brothers" brand name. Please do not disparage their brand by associating them with Repugs. What the GOPer's don't know about the bow tie they bought, is most of the family are HARD CORE DEMOCRATS.

In November 2002, Barbara Walters interviewed the Gore family for 20/20, and talked extensively about the Republican siege of Blair House. Dubya's sister Doro was sometimes part of the crowd; many of the crowd members were bused in by the Bush campaign. Karenna said she sometimes felt physically threatened by the crowd, but when she demanded that her father and his campaign fight back, he replied that he wasn't going to do anything that could tear this country right down the middle. In fact, he called off more than one counter-demonstration for fear that the competing crowds would get violent.

This section of the interview was never aired; instead, the transcript was posted very quietly on the Web.

Small wonder I hate Repuglicans as I do.

the thugs were everywhere acting on behalf of the criminals in the republican party. They are still the thugs and will always be when called upon to protect the president and his regime

What the Gore's should have done was vediotape the people outside the Mansion and put the video on the Internet. That would have proved that it did happen, and who the people were.

So Gore was afraid to tear the country apart? Is what's happened since any better? The Constitution's been torn apart.

I'm always reminded of what Nadler said about the occasions. The "stench of fascism" was in the air.

I afelt sorry for the Gore family at the time. Such boorish behavior...

Dave offered above that Nadler said: “The ‘stench of fascism’ was in the air”. The report also called the Mob’s behavior “aggressive intimidation tactics”. What most people don’t realize is that these behaviors are only small glimpses of what really this criminal organization is all about.

I was in a family for more than 26 years who was part of this criminal system. There’s a mountain of worse crimes than corruption yet to surface that follows along with their typical aggressive intimidation tactics. This really needs to surface so that Americans can fully learn what is really happening in our country.