Rove Rage: How His Treasonous CIA Leak Has Damaged the U.S.'s Ability to Track Iran Nukes 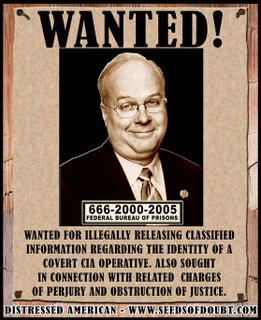 A bombshell revelation was made Monday on MSNBC's Hardball With Chris Matthews that directly ties embattled former Bush policy advisor Karl Rove to the United States' inability to keep tabs on the proliferation of nuclear weapons in Iran. In leaking the identity of covert CIA agent Valerie Wilson to reporters, Rove not only put the operative's career and life in danger, as well as those who worked alongside her, his actions also served to put the nation at grave risk.

According to Hardball correspondent David Shuster, "Intelligence sources say Valerie Wilson was part of an operation three years ago tracking the proliferation of nuclear weapons materials into Iran. And the sources allege that when Mrs. Wilson's cover was blown the administration's ability to track Iran's nuclear ambitions was damaged as well."

The news of this breach comes just days after Bush once again reiterated the need to toughen the U.S. stand against Iran, which has vowed to continue ignoring demands by the United Nations Security Council that it suspend its uranium enrichment.

That "Bush's Brain" Karl Rove is responsible for this devastating intelligence setback pertaining to Iran's nuclear build-up--and still has his highly coveted security clearance--is utterly reprehensible and should be considered an act of treason.
Posted by The Ostroy Report at 9:18 PM

Wow. This should be huge front page news and I'm reading it in a blog. Hope the major media picks up on it.

Again Bush and his Admin are guilty of (another count of) treason in that outing Plame as payback for her husband's public disagreement re the Niger/Iraq lie Bush was playing on the world to justify his attack on Iraq, has now further threatened our security in that he is now doing the same with Iran... just think of all the intelligence missed because Ms. Plame and ALL OF HER connection (and their connections --lost-- and others agents that had to halt specific work -- and their agents lost due to this intelligence failure put upon us by our own Presidency!)they were all shut down three years ago; so, now it has come to there being such a gaping hole in Iran info that the rest of the world is now threatened by this Admin's petty, stupid, criminally incompetent, greedy lies that yet another more dangerous war is upon us.

It is his fault that our intelligence community has been destroyed concerning Iran! Bush is to blame! Bush is Rove's boss. If the current Congress does not stop this horrible crook, they should all be voted out of office so a new Congress can impeach this monster!

He is a traitor - he is a treasonus threat to our country and our world; and he needs to be held accountable.

Keep up the good work. The so called 'liberal' media sure will avoid the story.

Why aren't MSM stations picking this up? Maybe because it is just more gasoline on the fires that are already burning to impeach the whole Bush idiocy, oh I mean, administration.

Let Colbert make news of it.