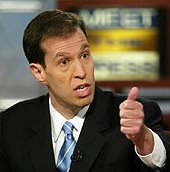 Every time I think the Repuglicans have stooped to new lows and can't get any lower, along comes RNC chair Ken Mehlman with yet another incredibly ludicrous, insanely deceptive, shameless display of unparalleled partisan gall. In an email to constituents Tuesday, Mehlman has the supreme cojones to blame astronomical gas prices on Democrats, while touting President Bush as the great energy guru who's going to eliminate our pain at the pump.

"As you plan your summer road trip, you've had to budget for rising prices at the pump," Mehlman writes. "President Bush is focused on providing practical solutions to energy prices: fair prices at the pump, increased supplies of gasoline, greater fuel efficiency, and new alternative fuels. When it comes to lowering energy costs, all Democrats offer is hot air designed to conceal their long record of supporting higher energy costs for America's families."

The email also provides a link to the RNC's new video which portends to "find out how much the Democrat's energy proposals would cost America at the pump." Is he out of his mind? Is he suffering from the worst case of delusion known to man, or is he simply one of the most reprehensible, pathological liars in the history of politics who thinks Americans are the stupidest people alive?

Mehlman also offers Repugs the opportunity to "use our gas calculator to find out how much more Democrats want you to pay at the pump." Here, you put in your make, model and year of car and these wallet-jacking ReTHUGlicans spit back at you some asinine estimation of your increased gas costs under the Democrats. Only these cretons could cause gas prices to double on their watch and attempt to blame it on Democrats. Only these self-serving oil peddlers could sit idle for six years while letting the gas companies rape the American people, only to crawl out from their rock in an election year to blame Dems and claim Bush has all the answers.

"When it comes to gas prices, Americans have a choice between President Bush's four-point plan for lowering prices at the pump, or liberal Democrats who consistently choose higher taxes, more regulations, and more dependence on foreign oil over safe exploration within our borders," Mehlman spins.

"Watch the video and see what a Democrat-controlled Congress would cost you," says Mehlman. What bullshit. The DNC should immediately put out a video that says, "Watch OUR video and see what the Republican-controlled Congress HAS cost you." Howard Dean, are you listening? Get out there and speak the damned truth to voters. Don't let these lying criminals dominate the stage on this issue. Go for the jugular. Ram the current $3.30 gas prices down their throats at every possible turn. Remind America that gas prices were $1.50 when Bush took office, and that a barrel of oil cost $30 instead of this week's $67.50. Remind them how the Busheviks let the energy companies write their own legislation last year. Remind them of Bush and Cheney's history as oilmen, their current financial ties to the oil industry, and that Condi Rice has a friggin' oil tanker named after her for Pete's sake. Remind them that while the little guy's paying an extra $20 a week to fill the tank, ExxonMobil recorded a record $34-billion profit last year and is on track to exceed that amount this year. Put them on the defensive. Demand that they justify to voters how their coziness with the energy companies has been anything but good for America. It's time we put a stop to the reprehensible rhetoric from the likes of Ken Mehlman, Karl Rove and the Busheviks themselves.
Posted by The Ostroy Report at 2:12 PM

Andy - this is just the typical right wing fundamentalist bullshit that these idiot repuglicans spill out of their god-forsaken mouths each and every day. They have never and will never, ever accept responsibility for ANYTHING they do. They are pathalogically designed to point fingers at every turn instead of looking in a mirror. Once upon a time, I was proud to be an American -- and I still am to a point -- but I am DAMN ASHAMED that too many of my fellow Americans continue to support and condone the behavior of this sick, twisted, dillusional man and his pathetic excuse for an administration. Ken Mehlman should be locked up in the same insane asylum that Bush needs to go to as well as all of his other cronies. 2008 cannot come soon enough for me. This nightmare has got to stop. Thanks, as always, for showing these lunatic assholes for who they are - and for always shedding light on the bullshit. Love you Andy.

It doesn't matter how outlandish the Republican talking points are the seem to always put us on the defensive. Does the Dem. Nats. have anything to put us on the offensive and make them have to scramble? I have confidence in Dean but the rest are as phony as a three dollar bill. I would put out a widely visible chart showing the debt, the deficit, the price of oil & gas, the cost of the war and the number of casualties. Iraq & Afghanistan. And just beat on them. Then DeLay, Abramoff, Ney, Frist & SEC, Cunningham, Doolittle, secrecy, Spying, Plame, Libby, hopefully Rove, Cheney, checks and balances. Its not like they don't have issues. Pick one or two and keep up the beat and drum it into the electorate.

People who still support Bush are pro war, pro life and want a theocracy in our nation.

I think the problem is worse than those mentioned above. I live in a small southern town and most of the residents here don't know who Mehlman is; don't know what's going on in the world or our country and have little interest because they depend on their preacher and FOX News (when they watch the news) to tell them how to think. The newspapers are a laugh - almost no national or international news and no one subscribes to the newspapers published in cities which are almost always at least a hundred miles away. I live in a Third World area as do a vast number of others all over our country.

The only way your going to stop these people is to arrest the whole bunch and take all to jail.Impeachment just wont work we seen that,The whole congress is just as corrupt as the rest of them
The tv owners are all bought off to run their propaganda so they ought to go too

War is peace, truth is lie.

"most of the residents...don't know what's going on in the world or our country and have little interest"

unfortunatly, im not in a small town, and I am surrounded by complacency.
People are scared to talk about things that will lead to disagreement. Most want to pretend that everything is fine, put your ipod on, or pick up the phone, because god forbid you have to talk to the person on line, or in the elevator.

Plus this is another smokescreen issue, the republicans are doing whatever they can to squirm away from the Iraq war.

no one has to die tomorroW.us

This is the same strategy being used on the GOP.com website:

They're all a bunch of liars!

All I know is I'm not going to the calculator... but since Bush has been in office it takes my 1999 Ford Taurus 200% more money than it did to fill it.