President Bloomberg? The Mayor Says No, But His Actions Say Maybe 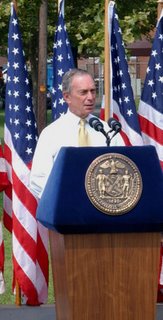 There's been a lot of chatter lately about a possible '08 run for the White House by New York City Mayor Michael R. Bloomberg. Despite repeated denials of a presidential bid, he's been expanding his political horizons by commenting on a wide-variety of national-interest issues such as the environment, illegal immigration, gun control, stem-cell research, intelligent design and gay marriage. Regardless of his broader political aspirations or lack thereof, I happen to think a Bloomberg candidacy has a lot of viability.

It's unlikely he'd be able to win either the Democratic or Republican nomination. But with voters' anger and frustration with Bush and the Republicans never greater, and with their clear lack of enthusiasm for Democrats, the time has never been better for a 3rd party candidate to race down the middle and capture the disenfranchised on both sides. Though such independent candidates have never fared well in American politics, that doesn't mean they never will. What Bloomberg has that no other candidate has is party duality. He's the only one who could say "I've been a Democrat, I've been a Republican, and I can give you the very best of both parties while also giving you the fresh perspective of a Washington outsider who's not beholden to any special interests." He could run on a bi-partisan platform that promises to bring the nation together after more than a decade of unprecedented nastiness between the parties. In an era of unjust war, record deficits, skyrocketing energy costs and rampant corruption, this sort of message could strike a major chord with voters and change history.

Unlike the current White House occupant and "CEO" president, Bloomberg is a highly effective and successful chief executive in both business and politics. His media empire has made him one of the richest people in the world with an estimated $5 billion fortune. This success has translated into political success as mayor of New York. On his watch, NYC has amassed a $5-billion budget surplus; crime has continued to drop; the public education system has been overhauled, and test scores have risen; the streets are cleaner; and tourism has never been stronger.

As if this record wasn't enough to attract voters, consider that his politics represent the mood of a majority of Americans today: socially moderate and fiscally conservative. He's got the track-record, the deep pockets, and the f**k-you attitude towards special interests to appeal to the tens of millions who are fed up with the current state of politics.

The big questions is, if he did run, and he didn't win, would he simply be a spoiler as Ralph Nader was in 2000? And if so, who would he pull votes from, the Dems or the Repugs? Stay tuned. I have a feeling we're going to be hearing a lot more about "non-candidate" Bloomberg's candidacy over the next several months.
Posted by The Ostroy Report at 10:36 PM

I find it hard to believe Bloomberg could make it through the very hard core right primary process.

Cathy
From the once Great State of Michigan

"Crime is dropping" allright. The have nots are being driven right out of town. It costs $125 a week to rent one room in someone else's apartment in Harlem. think that's rhetoric? Go apartment hunting anywhere in the five boroughs of New York City. If you are not rich, lots of luck.