Bush Promises to Stay the Course in Iraq Until the Mission's Completed. But Just What the Hell is the Mission Anyway? 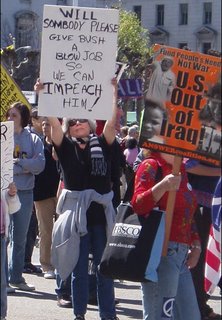 It's been over three years since the United States invaded Iraq. Three years since Bush, Cheney, Rumsfeld, Rice and Powell--the Fab Five of fabricated intelligence--sold us a bill of goods about Saddam Hussein's growing arsenal of WMD and fears of mushroom clouds. They even knew where the WMD was, Rumsfeld arrogantly boasted. British Prime Minister Tony Blair, Bush's partner in crime, said the bombs were a mere 45 minutes away. And in the biggest lie of all, they morphed Saddam into 9/11 mastermind Osama bin Laden, Al Qaeda into Iraq, and thus the official Bushevik war on terror was deceptively hatched. We invaded Iraq, they told us, to stop Saddam's production of nuclear, chemical and biological weapons, and more so to keep him from giving these WMD to terrorist organizations like Al Qaeda, with whom he was directly connected. Fight 'em over there, they said, so we don't have to fight 'em over here. Blah, blah, blah....

That was 2003. Yet in 2006, with no WMD or direct Al Qaeda ties to Saddam found, the Busheviks are still regurgitating the same fear-mongering rhetoric. That it was necessary to take out the big bad evil-doer Saddam. That he was a threat to the Middle East, to Israel and the U.S.

To this end, Bush was a very busy propagandist on Saturday. In his morning radio address, and in his commencement speech to West Point graduates, the once-AWOL commander-in-chief reiterated the same drivel he's been spewing to the nation for the past four years. Speaking of our troops, Bush said: "Because of their courage and sacrifices, Iraq has a free government that will be a strong and capable ally in the global war on terror...In recent days in Iraq, we've seen what their sacrifices have made possible. The best way to honor America's fallen heroes is to carry on their fight, defend our freedom, and complete the mission for which they gave their lives."

But what exactly is our mission these days? It's changed so many times I've lost track. It's not WMD or Al Qaeda connections, obviously. And it can't be regime change or installing a Democracy, milestones which have already occurred. If Bush knows what the mission is he certainly isn't sharing it. Judging from recent polls giving Bush embarrassingly low ratings for his handling of the war, Americans are clueless as well. And they're finally frustrated and angry.

The truth has never gotten in Bush's way before, and it's no obstacle to him now, despite how utterly ridiculous his claims: "The greatest danger America faces is the threat from terrorists armed with weapons of mass destruction," he told the cadets. Deja vu all over again. It's time this war criminal (invading a sovereign nation unjustly; Geneva Convention violations; lying to Congress and the U.N.) stops Bushitting the American people and starts leveling with us instead. We want to know why we are in Iraq. Why our soldiers are getting killed. How long he intends to keep the troops there. What the game plan is for withdrawal. And in clear and concise terms, what the mission is.

Until then, all we seem to be doing is fighting an energized, fanatical insurgency that's clearly not "in its last throes," as Cheney once moronically predicted. The war, with no clear purpose, is spiraling out of control and getting worse every day. In a rare candid moment Saturday, Bush told the new soldiers that "the war began on my watch, but it's going to end on your watch." A little glimpse into the future that they, and we, would rather not see.
Posted by The Ostroy Report at 6:42 PM

The mission is to "save face". Macho boys don't back down, ever.

What's the mission? Ask Hillary or the other Democrats who are for more soldiers, more bombs and more money for the Iraq war.