Voters Tell GOP Senators to Take $100 Gas Rebate and Shove It. It's Time to Boycott Exxon Mobil and Send a Clear Message 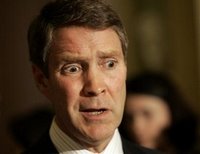 The Republican-controlled United States Senate's idea of parity when it comes to the astronomical rise in fuel costs is, "Exxon Mobil, $36 billion for you, $100 for consumers." Last week, after coming back from recess to a hailstorm of constituent complaints over $3+ per gallon gas prices, Majority Leader Bill Frist (TN) came up with the brilliant idea of giving taxpayers a $100 rebate to ease the pain. Since then, angry voters have been telling him and Senators where to stick those measly checks. And they see it as nothing more than a feeble, desperate attempt to pander to Americans in an election year.

Having driven a distance this past weekend, I had the unfortunate task of filling my tank twice, for a financial set-back of $120. It's unfathomable how Congress and the president has allowed this raping by the oil companies to occur. How is that we are paying exorbitant prices at the pump--$3.50-$4.00 per gallon in some parts of the country--while the oil companies are posting the highest profits for any company in any industry in U.S. history? Exxon Mobil earned a breathtaking $36 billion last year, and announced quarterly profits last week of $8.6 billion. On NBC's Meet the Press yesterday, panelists of oil representatives and industry experts said earnings will be even bigger this year than last. All the while as the American consumer gets the gas pump shoved firmly you-know-where.

The price of a gallon rose $.60 in April, and has doubled since Bush took office. And Exxon Mobil, throughout this crisis facing the average American, had the audacity to give it's former Chairman Lee Raymond a whopping $400 million retirement package which we're paying for.

It's time for consumers to take action in the form of a boycott of Exxon Mobil. It's time to send a very loud, very strong message to these thieves that skyrocketing prices will not be tolerated. Think of what would happen if every American decided to buy its gas at any station other than an Exxon Mobil. A week of catastrophic revenue declines might push these rapists to explore ways to keep energy costs down, don't ya think?
Posted by The Ostroy Report at 8:15 AM

I read in the paper (Detroit Free Press) that Americans are not happy with the Repub $100 bribe.

Glad to see Americans waking up!

Two and a half years ago we took delivery of our 2004 Prius hybrid and not even having a crystal ball we figured it was the right thing to do, boy were we right. We only have 12,000 miles on it but we are getting a constant 54.8 mpg and our highest was a whooping 63.6 mpg. This is the direction we need to take and get away from the gas thirsty V-8s and SUVs. When gas is over $4.00 will we start to change or will we wait until it’s $5.00, only time will tell.

We bitch about the gas prices but just two years ago when we were in Australia the price of regular was $1.05 per liter which comes out to $3.97 a gallon. Now the price in Sydney is $5.16 a gallon so we have little to complain about. Last summer when we were in China the gas was $1.97 a gallon, I wonder what it is now.

We can complain and boycott all we want but the big oil companies can and WILL charge anything they want, after all who is going to stop them, not this administration that’s for sure.

I'm sick of the argument that things are worse in other places and also that gas is cheaper than milk. Not only that, an email urging customers to boycott Exxon has circulated for at least two years and most people who received it, I read somewhere, have done just that. The boycott seems to have had no effect. Perhaps we should follow the example of the illegal limmigrants and boycott the gas companies by not driving and not purchasing oil for one or two days. But, then, the companies are so rich and crooked, they'd just sit it out and then raise the prices more. There is no hope.

With air travel using jet fuel and mass bus transits systems and marine usage of petroleum products, a day or two boycott may make a small blip in the oil cash machine, but hardly a statement. It would have to be over time and, to me, America is not structured to pull that off. It appears that one way to make an impact is to let your congressman KNOW that you will not tolerate the situation with gas prices. Until then, we bought a VW new beetle to make the long commutes. The SUV will only be used for hauling large things used in our business. Bye-bye comfort, hello economy. At least the bug is fun to drive!