The Giuliani Delusion: Voters Are Ready For a Pro-Choice, Pro-Gay, Gun Control Repuglican 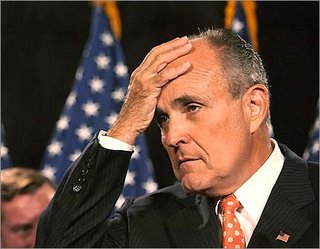 Testing the 2008 presidential waters this week in Iowa, former New York Mayor Rudy "Twin Towers" Giuliani demonstrated once again that without his 9/11 badge of honor he's little more than a Northeast pseudo-liberal out of synch with his party's views and delusional about its voters. Giuliani, a proponent of abortion rights, gay rights and gun control, believes he's in his party's mainstream and that across America this heretofore unseen 'big tent' is just waiting for a candidate like him to sweep them off their all-embracing, open-minded feet and thrust him into the White House. Reality-check time: we're talking about voters who in 2004, by and large, went to the polls for the sole purpose of discriminating against gays. Taking his delusion a step further, Giuliani also lavished praise on Bush, who he said would go down in history as "a great president." Of Bush's record, he said "I don't know what we're all so upset about." Somebody please call a medic before this condition worsens!

Here's the deal, Rudy. If you're gonna run for president, you better get inside the head of the average American. Not the wealthiest 1% whom the Busheviks take care of, but the poor and middle class of this country. And if you really want to know what they're 'all upset about', they're angry over astronomical gas and oil prices; rising interest rates; inflation; stagnant wages; the two-income necessity; record debt; rising housing costs; rising healthcare costs; a dreadful response to natural disasters like Hurricane Katrina; the culture of cronyism and corruption that runs rampant in the White House; and a colossal military failure called the Iraq War. 'A great president' you say? Where's that medic!?

Looking ahead to '08, Giuliani lamented the possibility of going against likely front-runner Sen. John McCain (AZ). "John is a good friend and someone I have tremendous admiration for, and he's a hero of mine, so I haven't really thought about how I would approach that." The odds are, with Giuliani's enormous ego, he would most likely approach that quite competitively. You can bet that whenever a politician sticks his toes in the water, the feet will likely soon follow.

"I've got a lot of places to go and a lot of people to talk to and a long process of figuring out whether it makes sense to run for president in 2008," Giuliani said. "I don't know the answer to that yet. My effort this year will be to help Republicans get elected, and then, quite honestly, as part of it, saying to myself, does it look like I have a chance in 2008? And make that decision after the 2006 election." C'mon Rudy, you fool no one. You've waited your whole life for this.

Giuliani also believes his party is much more open and tolerant of diverse opinion and would welcome a candidate with more moderate (read: liberal) positions like his: "The party's a big party, and I fit in to the party real well over the last 10, 15 years." Poor guy. Will someone please wake him up from this dream.
Posted by The Ostroy Report at 10:05 PM

Like the blog. great job. If your a hiphop fan come check out mine.
Hip Hop and Politics.
Lemme know if u wanna do a link exchange.

Poor Rudy! He has been in New York too long. His party is not the party he thinks it is. It has swung way right and wants to make this country a theocracy.

If only people knew how the system works. The Repubs run it all and do not want the Dems to have any voice. It is working well for them. They keep saying the Dems have no plan, when the truth is they are not allowed a platform to talk to the American people.

There are so many "safe Repub" seats come November, that I am afraid many voters will be very disappointed at the outcome.

I hate to say it, but we have to suffer more for a hugh majority of Americans to get it.

Who cares if Rudy wakes up. He did a terrible job as Mayor of NYC and had only his shining, photo-opt moment after 9/11. And, the other loser, John McCain is now defending his appalling suck-up to Bush after Bush destroyed and humiliated him in the campaign by claiming that he (McCain) is a forgiving and spiritually advanced person. PA-leeze! When will they be called on their utter phoniness?