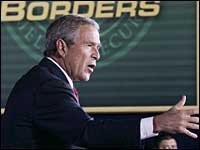 Immigration reform is the new gay marriage. It's the wedge issue of the day, and phase two of the Busheviks' divide-and-conquer strategy. The powers that be in the Republican Party, especially in the U.S. House of Representatives, link the issue to border security and the war on terror. And of course, the fear-mongering Repugs will milk this connection till the cows dry up. But there's another angle the GOP's pursuing, and that's the economic one; that illegal immigrants are hurting the economy by taking jobs away from Americans. But is the U.S. government doing anything about this when it has the ability to do so? Not a chance. For now, until the Repugs lose some power, corporate America is safe. Safe to keep hiring as much cheap illegal labor as it wants.

In his conservative magazine Human Events, editor Terry Jeffrey writes in a recent article that the government knows exactly which companies are violating the law by hiring illegals, yet is giving these law-breakers a free pass. He cites the Social Security's Earnings Suspense File (ESF) as the mechanism through which the Busheviks could stem the tide of illegal immigration.

"The ESF is where the SSA puts W-2 reports when the Social Security Number on the report does not match the name," Jeffrey writes. "According to the Government Accountability Office, the ESF is growing by about 9 million W-2s per year. This growth is primarily driven by employers who hire illegal aliens and file W-2s on their behalf using either another person’s or a fake Social Security Number. Each year SSA produces an internal list naming every employer that filed 100 or more non-match W-2s the previous year."

These companies, he said, get a warning from the feds. "Most employers on the list of those filing 100 or more bad W-2s most likely received a letter from the government telling them they had filed those bad W-2s. Employers that year after year file large numbers of bad W-2s know exactly what they are doing."

There's an even more significant list, Jeffrey said, that highlights the most blatant violators. "Call it the Leviathan List. In October 2004, the SSA Inspector General released an audit report listing the 'Top 100' employers that had filed the largest number of bad W-2s in the five years from 1997 to 2001. The report did not name the employers, but listed them by the state in which they are headquartered, the number and percentage of their bad W-2s, and other payroll data."

It should be noted that there is an effort by Homeland Security Secretary Michael Chertoff to seek from Congress a provision for "carefully crafted access to Social Security no-match data, so that we can detect those employers who are systematically employing workers despite the fact that there’s an obvious mismatch between the names and the Social Security Numbers in question." Whether the current Repuglican leadership enacts such legislation remains to be seen.

Until new laws are passed, corporate America, in its quest for cheap labor, is willfully violating the law and the Busheviks, in their mission to serve their rich corporate constituency, are letting them. But clamping down on this criminality could be making our borders and America itself more secure. Once again the Repugs show just how patriotic they aren't.
Posted by The Ostroy Report at 8:50 PM

Just wanted to let you know I agree with you about 100% of the time. Rock-on. May your days be filled with happiness in all you do. Thank-you.
James
vegas.rush2win.com