With All That's Wrong in America Today, Red-Staters Turn Their Wrath to The Dixie Chicks Instead of Bush and the GOP 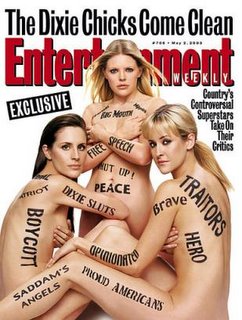 What is wrong red-state America today? Their sons and daughters are dying in Iraq. They lost homes after Katrina struck. They're paying $25 a week more at the gas pump. Their wages are stagnant, and their unemployment rates are well above average. Their healthcare's mediocre, and academically their schools rank the lowest in the country. No matter how you score it, they should be mad as hell at Bush and the Repuglican leadership. But it's The Dixie Chicks instead who make them angry. All because lead singer Natalie Maines had the balls to say what they should be saying if only they weren't so brainwashed by The Rove Gang.

Just two weeks before the Iraq war in 2003, Maines told a London audience, "Just so you know, we're ashamed the President of the United States is from Texas." This fiery comment caused quite a stir with the country music-lovin' folks back home, and Maines was compelled to issue a half-hearted apology to Bush, which she now regrets. "I apologized for disrespecting the office of the President. But I don't feel that way anymore. I don't feel he is owed any respect whatsoever....If people are going to ask me to apologize based on who I am, I don't know what to do about that. I can't change who I am."

Since then, Maines and her bandmates have been paying dearly for her honesty. Record sales have plummeted, and country radio stations refuse to play their music. Their new single, "Not Ready to Make Nice," off their new album, "Taking the Long Way," is getting little airplay. As one radio host said, it's "a four-minute fuck you to the format and our listeners. I like the Chicks, and I won't play it." Furthermore, they're virtually invisible on country music cable channel CMT. And at the Academy of Country Music awards Tuesday night they were dissed by country queen Reba McEntire, the show's host, who fired off a sharp dig to rousing applause: "If the Dixie Chicks can sing with their foot in their mouths, surely I can host this sucker." McEntire should stick to singing and leave politics to those who read a newspaper (and leave the joking to funny people).

Three years, no WMD and 2500 dead U.S. soldiers later you'd think the Chicks would have earned some respect for being so prescient. Fat chance. The right-wing fanatics prefer to slap inane yellow "Support the Troops" bumper stickers on their cars rather than face the reality that, under the false pretense of national security, their beloved president manufactured intelligence and sent these troops to die in an unnecessary war. It's Bush they should be livid with, not Maines. She was merely exercising her 1st Amendment right of free speech; the same rights our soldiers in Iraq are giving their lives to supposedly protect. What a shameful irony.

It's time Repuglicans start to realize what's truly important, and that not everything has to be partisan. We're all Americans, and if the war's a disaster for one of us, it's a disaster for us all. Kudos to Maines for her courage three years ago, and for her resolve today.
Posted by The Ostroy Report at 3:59 PM

Hooray for the Chicks and Reba, pluck you!

You people in Blue States just don't get it. The Red Staters (many former segregationalists) are against abortion and gay marriage (and in most cases blacks whom they accuse of not wanting to work in order to get welfare - remember Regan said food stamps were used for vodka) so they will continue to support Bush and Repugs because they all feel the same way. Plus, that's what those who are "saved" hear from the pulpits every Sunday and Wednesday prayer meeting services. And since they're "saved" no matter what, the end always justifies the means.

It time for the blue states to end the welfare for the red states. We pay in more in taxes then we get back they pay in less and get back more. Lets see how they like it when they have to pay their way. Maybe that would wake them up. The rightwing is so far removed from reality that it is no longer funny. How do you save somone who is as far gone as they are?

It truly makes me sick to my stomach to still hear Americans so fucking stupid as to play the red state blue state bullshit. Lame dickheads!!!

And with Reba McEntire's comment about the Chicks singing with a foot in their mouths, I thought she did a great job in hosting the ACM show with her lips planted squarely on the slimy behinds of Lowry Mays, Tom Hicks, Red McCombs and other corporate radio weasels.

It would do you some good to do a spell check before posting your blogs. Poor grammar looks so unprofessional.

Damned if I can figure out how the red states...(there's only four of them left, you know) thinks that Bush is spreading Democracy...(by killing in Iraq) but the red staters seem to hate democracy in our own country...ya know that part of Democracy thats about free speech, the right to dissent, freedom of religion (or no religion),they seem to think THEY have the right to all that, but no one who disagrees with them does... a different form of Democracy than what I was taught in Civics and U.S. History

The weird thing about Toby Keith is, I read that he is a registered Democrat in one of his magazine interviews...

When I taught school in a blue state, the SUBSTITUTE teachers were required to have a four year bachelor's degree in - gasp - education! The red state I taught in required the substitute teachers to have... a GED. Then we wonder why red state folks are not as educated as the blue staters. There are red and blue states because there is a VAST difference in perspective and personal potential. I live in it everyday. When the goal here is to get married in the church rather than get a life skill...well, even the Three Stooges could figure out that red state life is going to be limited. Stupid is as stupid does. I'm just getting sick of having the uneducated think they know what's best for the country. I'm not sick of it...I'm pissed!

Only a couple/three generations removed from their 1933 German predecessors, these poorly educated, relgiously indoctrinated, Red staters, are AT BEST jsut little people afraid of most any/everything because of their inability to 'challenge' anything intellectually. Destined to be ruled by fear, and controlled by fearmongers.

For the little people of the red states:

"I must not fear. Fear is the mind-killer. Fear is the little-death that brings total obliteration. I will face my fear. I will permit it to pass over me and through me. And when it has gone past I will turn the inner eye to see its path. Where the fear has gone there will be nothing. Only I will remain."

For Maines and the Chicks, you'll add PLENTLY of new fans, including me:

"To be nobody but yourself in a world which is doing its best, night and
day, to make you like everybody else means to fight the hardest battle which
any human being can fight; and never stop fighting."

Perhaps it IS time to revisit that 'succession' concept that the red staters were NOT able to pull off...?

you have to keep in mind, Natalie comes from Lubbock, TX which is regarded as the second most conservative city in Am.

I live in the area and the assessment is correct. We still get letters to the ed. in the super
conservative Lubbock Avalanch Journal which attacks anyone who criticizes Bushco as giving aid and confort to the enema (sic). One of these letters came from a local MD, who may have been trying to drum up business.

TIME mag. may have had it correct. Natalie may have been born with her middle finger out first. She may even be somewhat immature,(I taught at a jc where Natalie was in the music program. She proclaimed there that she hated country music) however, if more of us (including myself)had had the courage to question and criticize the smirking chimp, possibly we would not be in the present situation.

to the nerd, type A, arsehole who is so concerned about grammar and spelling errors. fark you!! did you get the meggage???

Red staters (or hard core Bush supporters) are more interested in the culture wars than their own (or their children's) economic futures.

So Bush's base appears to be the very rich, neo-cons and the religious right who want very much for this once great country to be a theocracy.