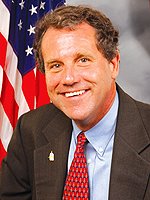 I attended a fundraiser Thursday evening in Manhattan for two Democrats who've promised to play rough as they vie for seats in the U.S. Senate currently occupied by Republicans Mike DeWine (OH) and Jim Talent (MO). In the Ohio race, former two-term Secretary of State, Rep. Sherrod Brown, has served the state's 13th Congressional District since 1992. He voted against the war, favors federal minimum wage increases, and voted against the Bush tax cuts. In Missouri, hot on Talent's trail is former prosecutor and state auditor Claire McCaskill, who, among other issues, has taken a strong stand on stem cell research which has left Talent bouncing on the ropes. Both Brown and McCaskill each lead in the polls by about ten points.

Brown and McCaskill were introduced by New York Sen. Charles Schumer, who passionately spoke of returning to "our America;" the opportunities facing the Democrats in the November elections; and the need to combat the evangelism and economic greed that dominates the GOP today. As head of the Democratic Senatorial Campaign Committee (DSCC), he said he's supporting only those candidates who are willing to work extremely hard at campaigning and raising funds. He's aggressively backing Brown and McCaskill, who he said are two very electible candidates in states that can easily turn from red to blue.

I asked Brown about Ohio's notorious problems with voter fraud and disenfranchisement, which was evident yet again this week in the state's GOP gubernatorial primary where Diebold voting machines in Democratic-rich, heavily African-American Cuyahoga County mysteriously went on the fritz, causing delays in the opening of polling centers until 1:30PM. Brown said there's committees and watchdog groups that have been established to both monitor and prevent such activity, and cautioned against scaring Democrats to the point where they say my vote's not going to be counted, so why bother going to the polls. This is a very valid point, but I'm still far from convinced that the fear many have of rampant voting irregularities is unwarranted.

My next question pertained to the Rovian playbook of dirty politics. In her opening comments, McCaskill said that in the weeks and months to come, the ReTHUGlicans will claim that she's "best friends with Hillary Clinton, eats small children, and wants everyone's sons to marry other men," among other things. In light of this, I asked how she and Brown, and other Democrats running in tight races, intend to fight an enemy that's been trained by a ruthless operative like Karl Rove, and one that not only lies, deceives and mercilessly slanders its opponents, but is terribly effective as well.

McCaskill, highly charismatic and feisty, vowed to fight a tough battle with equal artillery as her opponent. If they play rough, she'll play rough, she promised. And watching her speak, you truly sense that she means it. Her strategy, which I agree with fully, is to put the Repugs on the defensive and hold them publicly accountable at every turn for a failed war, low wages, lost manufacturing jobs, corruption, greed, etc. Can she succeed? If anyone can, McCaskill can. She's animated, ballsy and comes across as incredibly sincere. She's quite engaging, and it's easy to see why Schumer enlisted her to run. You can also understand how she can easily connect with voters. But we all know that the Rove mob does an awfully good job at making Dems spend all their time explaining that they really don't eat small children. And in the process, the Democrats' policy positions often end up taking a far away back seat. Just ask John Kerry.

As for Brown, an engaging, effective speaker and solid pol who's well-liked by Ohioans, he intends to repeatedly remind his state's financially strapped voters just how often politicians like DeWine vote against measures that would put money in their pockets. While he vowed to fight hard, he said "I don't see that as playing dirty, it's just telling the truth." He echoed McCaskill's contention that they and other Democratic challengers must continually expose the voting records of Talent, DeWine and the GOP leadership and relentlessly put them on the defensive for undermining the needs and interests of the average American.

You can get more information on these two very worthy candidates, and send in a contribution, by visiting their web sites:

As I've stated before, with the Iraq war, Katrina, the economy, illegal wiretappings, Bushevik leaks, lies about WMD and other political fiascos, the Republicans are handing us this election on a silver platter. Show your support, volunteer, and send your money. We can win in November if we all do whatever we possibly can to help folks like Sherrod Brown and Claire McCaskill get elected.
Posted by The Ostroy Report at 9:48 PM

it was great meeting you

Good luck to them both! Fighting back hard and fast is the key.

I live in Ohio and I can tell you that some Dems/Independents weren't super happy with having Brown as the candidate.

I've met DeWine and know people he knows and he's a nice guy, but he must finish last.

personally, I liked the idea of Paul Hackett running. Tough as nails war vet not afraid to speak his mind. seems like the party pushed him out because he was not generating enough cash. Sen Schumer supposedly railroaded him and propped up Brown instead. So the democrats go again with an insider instead of a fresh new face. I hope they're right.

On the issues the RETHUGS only represent about 2% of Americans economically and 20-25% on social issues.

When you stand up to them, they lose.