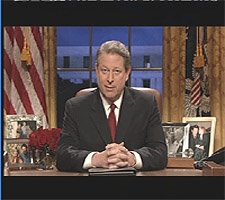 Al Gore made it all but official on Saturday: his 2008 presidential campaign is off and running. Capping what has been several post-2000 years of highly passionate speeches, books, prominent magazine cover stories and a critically-acclaimed global warming documentary to be released next week, The Goracle raised the bar even higher with a brief but stellar appearance on NBC's Saturday Night Live where he humorously mocked the Bush administration while setting the stage for his own candidacy. It was a beautiful thing to watch, and showed that the once-wonkish former veep not only has a serious stockpile of political mojo, as he's demonstrated since 2000, but he's also found his humility, personality and charismatic flair as well. Consider Saturday's performance akin to Bubba's seminal sax-playing moment on Arsenio Hall some sixteen years ago. It was that good.

The show opened with Gore sitting in the Oval Office, addressing a televised audience:

"In 2000, when you overwhelmingly made the decision to elect me as your 43rd president, I knew the road ahead would be difficult. We have accomplished so much yet challenges lie ahead. In the last six years, we have been able to stop global warming. No one could have predicted the negative results of this. Glaciers that once were melting are now on the attack. As you know, these renegade glaciers have already captured parts of Upper Michigan and Northern Maine, but I assure you we will not let the glaciers win.

"Right now, in the second week of May 2006, we are facing perhaps the worst gas crisis in history. We have way too much gas. Gas is down to .19 cents a gallon, and the oil companies are hurting. I know that I am partly to blame by insisting that cars run on trash. I am therefore preparing a federal bailout of our oil companies because, hey, if it were the other way around you know the oil companies would help us.

"On a positive note, we worked hard to save welfare, fix social security and, of course, provide free universal healthcare we all enjoy today. But all this came at a high cost. As I speak, the gigantic national budget surplus is is down to a perilously low $11-trillion. And don't get any ideas; that money is staying in the very successful lockbox. We're not touching it. Of course, we could give economic aid to China or lend money to the Saudis, again, but right now we're already loved so by everyone in the world that American tourists can't go over to Europe anymore without getting hugged.

"There are some of you who would like to spend our money on some made-up war. To you I say, 'what part of lockbox don't you understand?' What if there's a hurricane or a tornado, unlikely I know, because of the anti-hurricane and tornado machine I was instrumental in developing. But, what if? What if the scientists are right and one of those giant glaciers hits Boston? That's why we have the lockbox.

"As for immigration, solving that came at a heavy cost, and I personally regret the loss of California. However, the new Mexifornian economy is strong, and El Presidente Schwarzenegger is doing a great job.

"There have been some setbacks. The confirmation process for Supreme Court Justice Michael Moore was bitter and divisive. However, I could not be more proud of how the House and Senate pulled together to confirm Chief Justice George Clooney.

"Baseball, our national pastime, still lies under the shadow of steroid accusations, but I have faith in baseball Commissioner George W. Bush when he says, 'We will find the steroid users if we have to tap every phone in America.'

"In 2001 when I came into office, our national security was the most important issue; the threat of terrorism real. Who knew that six years later Afghanistan would be the most popular Spring Break destination, or that Six Flags Tehran is the fastest-growing amusement park in the Middle East. And the scariest thing we Americans have to fear is...Live From New York, It's Saturday Night!"

It's now unofficially official: this appearance should be taken as more than a mere backhanded slap at the president. It was The Goracle's coming out party. The race is now on, and Gore's in it.

(watch the video)
Posted by The Ostroy Report at 10:42 AM

Andy - this may have been the best skit in SNL history. It was funny as shit!!

But, like Colbert I haven't heard a comment about it. You would think the MSM would be hyping this as a what if from Gore.

I saw it and it was great!

BTW: This Sunday in our local paper, there was an article about how people are just walking away from their homes. The cities have to cut the grass for homes worth as much as $500,000!

Based on SNL? Why would anyone want this craven multiple oppressidency enabler (condoned adultery; accepted the pretender with today's consequences)to ascend to the executive, IN ANY CASE? Want a REAL WOMAN president, try Michigan Governor Granholm!

To the above 'anonymous': I guess 2400 dead is preferrable to an 'enabler condoning adultery'......

Cripes man! Our soldiers are being exposed to depleted uranium and IF they make it home will never lead normal lives and you're still pissed off about Clinton?

Al Gore is a MAN. I'm ready for a real man and not a swaggering pretend cowboy in the White House who doesn't even know how to ride a horse. Have you noticed you've never seen him ride one?

Gore is the one. Not Hillary and not another one in training pants.

All the opponents have to throw at Gore is the Ken Starr waste of taxpayer monies defense. I agree with the previous anonymous - Gore is the best choice.

Personally, I hope the Rethuglicans are in the minority for a long, long time.

Gore is in good shape for a run in 2008. He's been right on the issues (Iraq, global warming, NSA spying) and as Hillary continues her move to the right there is an opening for a legitimate progressive with access to big money - hitech corporations and internet small donors (Howard Dean's mailing list!). The release of his film should put him back in the spotlight and many will be giving him a 2nd look - and a first look for many younger voters. Hopefully he sees how badly our country needs him. Please run Al!

I have always considered Al Gore the man who should be President.
The right can smear and ridicule him all they want, but his intelligence, passion, and dedication is what the country has needed. I wish you were right about Al Gore running, it would make my hopes comes true, but right now all he is doing is trying to get folks interested in his movie, which I am sure is going to be great. It is a shame indeed that our country is in a bad shape because an incompetent, lying, wastrel, was selected to lead this country. Al Gore has been right on most issues, and as for Bush, all you have to do is look at the mess he has made.

Granholm would be good and she's hot... but she's also Canadian by birth, she cannot be President.

Hell we all smoked POT

Gore-Feingold would be awesome. In the meantime just remember that a departing Bush will give unconditional pardons to Rove, Cunningham, Libby etc. Also, there is a policy of pre-emptive war, so to cover the possibility that the repugs may not be charged till Bush leaves office he's going to issue pre-emptive pardons for everybody, Cheney included. Meanwhile, the Hague awaits hime for war crimes where he'll be going for the Son of Sam defence and calling Barney as his lead witness. Fitzy's not going to win against this sob, I tell ya...