Why Newt Gingrich Will Win the GOP Nomination in 2008. Repugs Forgive and Forget, But Democrats Still Remember..... 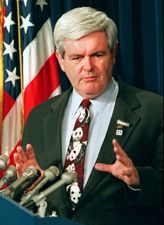 Forget Bill Frist. Forget John McCain. Forget Rudy Giuliani and Mitt Romney as well. And definitely forget Jeb Bush. The person most likely to walk away with the Republican nomination for president of the United States is former Speaker of the House Newt Gingrich. Appearing on NBC's Meet the Press last Sunday, Gingrich essentially confirmed to host Tim Russert that he intends to toss his hat into the ring: "I'm not ruling out running." If relentless public appearances, talk show interviews, position statements and criticisms of Bush and the GOP are any indication, New Gingrich is most definitely running for something. But while Repugs may forgive and forget, Democrats still remember his sleaziness, greed and corruption.

Gingrich represents what the Republican Party is missing these days: an articulate, charismatic and sincere-sounding masterful politician who also just happens to have stellar credentials as an aggressive attack-dog. Given the current crop of '08 GOP hopefuls, that's an intoxicating blend of qualities for the Repugs.

Gingrich's climb to power culminated in his 1994 co-authoring of the 1994 Contract With America, which resulted in dramatic success for the GOP in that year's Congressional midterms. He was subsequently elected Speaker, and ruled with an iron fist. He was a highly polarizing figure; a partisan combatant who created an environment of contentious opposition to the Clinton administration policies. He was also front and center in the Monica Lewinsky scandal, and led the move to impeach President Bill Clinton. Through his 1995 "Republican Revolution," he led a shutdown of the government over budgetary disagreements, but that backfired. That action, and eventual charges of hypocrisy and unethical behavior over a $4.5 million book advance, was the beginning of his political end. (As a Congressman in 1988, Gingrich brought ethics charges against Democratic House Speaker Jim Wright for allegedly using a book deal to circumvent campaign finance laws and House ethics rules. Wright later resigned from Congress).

Lately, Gingrich has been very critical of the Bush administration and the current Republican leadership. Ironically, much of what he condemns--partisan greed and corruption--he knows of firsthand, which makes his holier-than-thou stand arrogant and hypocritical. But people have short memories, especially Republicans. Gingrich is enjoying a measurable degree of respect and reverence from his party and within the media, and by any benchmark his political make-over is a huge success. History has been very kind and forgiving.

Gingrich is old-school Republican: a traditional small government deficit-hawk who's now firmly against the Iraq war. "It was an enormous mistake for us to try to occupy that country after June of 2003. ... We have to pull back, and we have to recognize it." Polls show that's what Republican voters are now thinking but are frustrated that they haven't heard it yet from their own leadership. Gingrich will be the party's savior who advocates a gradual withdrawal of troops; a strong defense against terrorism; low taxes; aggressive spending controls; immigration reform with heavy penalties for employers hiring illegals; and, get this, an environmentally-friendly GOP. And he'll do it all with a smile on his face, a twinkle in his eye, a masterful use of the English language (unlike someone else we know), an earnest approach and a willingness to accept that his party is in need of repair.

Watching Gingrich on Meet the Press, one can understand how an angry, frustrated Republican electorate can forgive and forget, and easily be sucked in by his charm and overall appeal. But to the rest of us Democrats, he's just the same old carnivorous wolf in a Brooks Brothers suit.
Posted by The Ostroy Report at 8:45 PM

But as long as he is for the culture wars, the right wing will love him. Hypocrites all of them!

Bring him on, we'll chew him up and spit him out just as easy as we will with McPain and Rudy.

Much complaining about the Dems but we don't even have to break a sweat and the Repugs are getting their butts beat.

Where is the charismatic Democratic prospective candidate? I don't see one.

It's up to us to keep reminding those with memory problems that he is a sleezebag in every sense of the word. This isn't the time to shrink away from political discussion in order to be politically correct. Charisma only goes so far when Newt's track record is kept at the forefront. If it takes playing hardball that is what it takes...