Why Has the Mainstream Media Ignored the Bombshell About the CIA Leak and How It's Damaged Our Ability to Monitor Iran's Nukes? 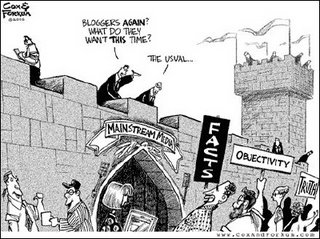 Earlier this week MSNBC's Hardball correspondent dropped the bombshell revelation that Karl Rove's leak of covert CIA operative Valerie Wilson's identity to reporters has put the nation at risk from Iran's nuclear weapons programs: "Intelligence sources say Valerie Wilson was part of an operation three years ago tracking the proliferation of nuclear weapons materials into Iran. And the sources allege that when Mrs. Wilson's cover was blown the administration's ability to track Iran's nuclear ambitions was damaged as well."

Moments after the piece aired I wrote about it the blog, thinking that the next morning this would be the major story of the day. Yet in the days following that report, this explosive news has incredibly been all but ignored by the mainstream media. This should, without question, be one of the biggest stories of the year. Currently fighting a war in Iraq (a country which didn't have WMD programs), we are now being told by President Bush that we face another grave threat from Iran (a country that does have WMD programs) and are being asked to support aggressive sanctions and possibly future military action. Simultaneously, it appears that the country's highest-ranking policy advisor and political operative, Karl Rove, was out there putting our spies, our soldiers and our nation at great risk by undermining the intelligence community that's been monitoring Iran's nukes. This act of treason, and the consequences of it, is something that the mainstream media should be pouncing on, searching for more facts and exposing whatever damage that's been done to America's WMD intelligence efforts. Until the mainstream press in this country understands what it's responsibility is to the American people, and starts doing its damned job, the Bushevik Monarchy will be allowed to continue operating unethically and/or illegally unchecked. Where are the young Woodwards and Bernsteins?
Posted by The Ostroy Report at 4:38 PM

Welcome to the Matrix.

This "leak" had at least two purposes: to sully the reputation of Valerie Plame's husband, and to screw up intelligence about Iran ... so to make it easier to go to war with Iran, don't you know!

As my husband keeps saying, "It doesn't matter". In otherwords, it looks like we are going to war with Iran no matter what Americans think.

Troops are preparing at Fort Brag now and we already have troops on the ground in Iran as you read this.

This story didn't even surface in the UK - thanks again for keeping me / us informed :)