...And They're Still Blaming Everything on Clinton.... 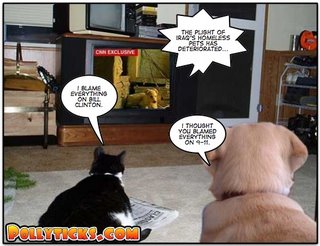 Just about a year ago I parodied an absurd NY Times Op-ed by David Brooks. Unfortunately, but not surprisingly, very little, except the death count and dollars spent, has changed...

David Brooks sits alone at his kitchen table at 4 am.
Posted by The Ostroy Report at 7:38 AM

While this may be red meat for the base, swing voters and thoughtful (read: non-genuflecting) GOPers are questioning this tired line.

With complete control of the White House, Congress and the Supreme Court, not to mention most state houses and governorships, the GOP can't face the debts, deficits, and hatered they've brought down on American's good name.

These tortured tie-backs to the Clinton years show they are not the party of personal responsibility. Far from it.

Ah, but will the fear tactics of the Republicans work this time on the voters?

Clinton was on the grassy knoll!!

Clinton eating all those Big Macs made Hastert fat.

Who will save our doomed country?

The religious right have set us on a path of destruction.

What would Jesus do?

He would bring down the temples of the Religious Right. He had little patience with hypocrits.

Rick said...
This comment has been removed by a blog administrator.
7:55 PM

More corruption from the Democrats!

will the OstroyReport censors, delete this message?? We will soon find out.

WHAT WAS SANDY BERGER HIDING???


A group of House Republicans called Wednesday for a congressional investigation into the improper handling of classified documents by President Clinton's national security adviser, Sandy Berger.
Berger admitted last year that he deliberately took classified documents out of the National Archives in 2003 and destroyed some of them at his office. He pleaded guilty in federal court to one charge of unauthorized removal and retention of classified material and was fined $50,000.

They asked the committee to determine whether any documents were missing from Clinton administration terrorism records, to review security measures for classified documents and to seek testimony from Berger.

Berger's lawyer, Lanny Breuer, did not immediately return a call for comment. A spokesman for the Government Reform Committee said the panel was reviewing the letter.

At issue is a strange sequence of events in which Berger admitted to sneaking classified documents out of the National Archives in his suit, later destroying some of them and then lying about it. The Bush administration disclosed the investigation in July 2004, just days before the Sept. 11 commission issued its final report.

During Berger's sentencing hearing Breuer characterized Berger as eager to get the facts of the Sept. 11 attacks right when he took the material, which contained information relating to terror threats in the United States during the 2000 millennium celebration.


Will the Ostroy censors delete this posting too? Can't they take the heat when 'playing rough' ??

Dear 3:19 Thank you so much for your remarks about Berger, I'm sure the purpose of your post was to point out that CLINTON is to blame for Berger's misbehavior in the same way that he's to blame for Bush not preventing 9/11; for Bush lying to us about WMD; for the Republicans not protecting the young pages and for every other misdeed the Republicans have committed. Because surely if CLINTON is responsible for their mistakes he is surely responsible for those in his own administraiton. You owe Berger an apology.

The one i blame is barbs for welping this peverted moron and h-bush for the defective seed.

Clinton For President, Again!
There I feel much better about it.