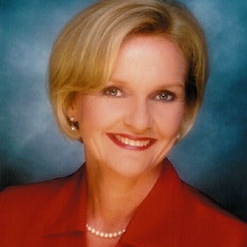 With less than four weeks to go until the critical midterm elections, Missouri State Auditor and Democratic challenger to Sen. Jim Talent, Claire McCaskill, has pulled ahead five points in this key battleground state. The two candidates have been locked in a tight race, running neck and neck for weeks. But in a new poll conducted by Bennett, Petts & Blumenthal, McCaskill now leads Talent 48%-43%.

Other recent independent polls all show McCaskill and Talent in a statistical dead heat, making the new poll more significant since it's outside the 3.5 point margin of error. Rasmussen Reports has polled monthly in Missouri and, in three of the last four months, McCaskill held a minor lead.

McCaskill has had a terrific week in terms of head-to-head debates with Talent. She began the week Sunday with a very strong showing on Meet the Press, landing Talent on the ropes over his positions on Iraq, stem cell research and lockstep Bush voting. On Wednesday, McCaskill had the incumbent on the defensive once again.

The Democrats need six seats to regain control of the Senate. The non-partisan Cook Report this week has Republicans toss-ups in seven states: TN, OH, RI, MT, PA, VA and MO. In New Jersey, polls show Democratic Sen. Bob Menendez with anywhere from a 8-10 point lead.
Posted by The Ostroy Report at 12:21 PM

Menendez will not win New Jersey. Poll or no poll, Menendez has

New Jersey voters are not happy about the direction of their state. The state has been run entirely by corrupt Democrats. Jersey Democrats DO NOT BELONG in government. They have been proven UNWORTHY TO GOVERN NEW JERSEY. There is no excuses for the Democrats on this one - they owned this state and will lose it.

NEW JERSEY VOTERS: If you've had enough of the skyrocketing taxes, the uncontrolled spending, the government corruption - SAY ENOUGH IS ENOUGH! Don't give your state away to corruption. The democrats will tell you to sacrifice New Jersey for the sake of the union. Tell them to go to hell! SAVE NEW JERSEY BEFORE IT'S TOO LATE - THROW THE DEMOCRATS OUT OF NEW JERSEY GOVERNMENT!

SAVE AMERICA ONE STATE AT A TIME. It's a valid argument to throw republicans out of office in some states. NEW JERSEY IS AN EXCEPTION to this argument. The Democrats have had control of this state for years and wasted the opportunity. They have done nothing but play politics, increase corruption, spending, and taxes; and what have the New Jersey residents gotten in return ??? MORE TAXES!!

Throw the Democrats OUT ON THEIR ASS!

Throw the bums out by voting in Junior? Kean Junior for Senator 'cause daddy sez so.

Why doesn't Kean get his Son a pony instead of a Senate seat?

A better question is: what have the New Jersey Democrats accomplished to DESERVE election? They own the state government, so they can't blame the Republicans for their New Jersey failures.

Throw the New Jersey Democrats out of office!!

The Democrats DESERVE to be elected because they ARE NOT REPUBLICANS. It's as simple as that.

Even though the Republicans have been in power for years now, they still manage to blame Clinton for their failures. So if New Jersey is a mess, it can't be the fault of the party in power, can it?

If the democrats in New Jersey are corrupt, we need to look more closely at the way those in control are being corrupted by by business interests. What we really need is a barrier between business and government. Eliminate the entire business lobbying system by making the government pay for campaigns and setting campaign spending limits. That will even the playing field and give the "underdogs" a fair chance. Absolute power corrupts absolutely.

7:49 HAS VOICED THE ANSWER TO THE PROBLEM. HIS/HER SUGGESTION IS THE ONLY WAY.

I agree that Menendez sucks....he voted with the GOP on the Enabling Act while airing commercials that Bush sucks.

But is lil Kean much better? Geez, his dad and the rest of the 911 commissioners, including that shill Ben-Veniste, knew about damning testimony that they kept from the American people.

Do we need a real Republican whose dad is beholden to the brownshirts in the senate?

Let's at least get the senate, reverse some of this administration's unconstitutional actions and then we can worry about getting menendez out.

Firsat get rid of the thieving war criminals who are ruining our country.

The quality of responses from the Democrats on this blog should be a big red flag to any NJ resident who is tired of the direction the Democrats have been taking our state. The corruption, taxes, spending, etc. is sickening.

Don't sacrifice your state any longer. enough is enough. Before all the businesses start relocating out of NJ because it is simply too expensive to operate in our bankrupt state. A Democrat from another state will tell you to vote for the nation, but they would never allow their state leaders to be so corrupt and inept.

Don't blindly vote for a Democrat just because the DNC tells you too. Look at what the NJ Democrats haven delivered over the many years they've controlled our government. What good have the done?

THROW NJ DEMOCRATS OUT OF OFFICE

Read Paul Krugman's column in the New York Times today. What he says is vital.

"The fact is that this is a one-letter election D or R, that's all that matters.

... And if the Republicans retain control of Congress, even if it's by just one seat in each house, MR. BUSH WILL RETAIN THAT FREE HAND. IF THEY LOSE CONTROL OF EITHER HOUSE THE GOP JUGGERNAUT WILL COME TO A SHUDDERING HALT."


This is only a small part of a vital, and compelling article that every voter in this country should read. Read it New Jersey citizens. America's future depends on this election.

Why? Put the country first. We need oversight in Congress. The only way to get oversight is to take either the House or Senate.

What is it that some of the above writers don't understand?

The above writers don't understand how anonymous 10:51 can be so stupid.

5:22 Are you the same one who posted the remarks on another Ostroy article on this blog about a respondent being a liar and propagandist. If so, God's really been busy telling you things that only He would know; or, are you yet another Republican to whom God is constantly whispering little messages about one or more of His other children. How did you Republicans get such favor? Not by living right - that's for sure.

anonymous 10:16,
Are you the same one who posted remarks on another Ostroy article on this blog about God talking to Republicans? If so, you really seem to know who God is speaking to lately. Are you God's secretary? How did you get that job? Not by living right - that's for sure.

anonymous 10:16,
It just occurred to me that you may actually BE GOD. Is that how you know who God is talking to? Are you talking to me write now through the OstroyReport, where Democrats Play Rough??

Hmmm....if you ARE GOD and you are talking to me through the OstroyReport, where Democrats Play rough; what I wonder, is your message...

Let's see - You tell me that you are busy telling me things that only you know. I appreciate that, God. But then you question how I've gotten such favor from God, and declare that it must not have been by living right.

I'm married and have children. Did I not kill enough unborn babies for your liking? I know I've never done it, so maybe I'm not 'open-minded' enough for your liking, God?

hmmm...how am I not living right? I've been working for 15 years. Should I quit my job and rely on the 'evil rich'?? Did I make too much money and pay too many taxes?

I'm very perplexed, God. Maybe you can enlighten me.

11:41 Oh,my dear. If you don't know whether or not God speaks to you and relates information you would otherwise not know, you simply must not repeat that information. This is somethng you should know without having to be told by God or a mere human.

12:42 Why don't you ask God to explain it to you? He surely will comply since you haven't had any abortions, if, in fact, you're the same dreary poster who responded before to the query about God.

Anonymous 5:03,
You are an abortion that somehow lived.

5:03 That's because God loves me and all the kind, good people like me who are mostly Democrats.

2:42 I asked. God does not support abortion.

8:49 There you Republicans go again saying that God talks to you

He told Bush to run for President and He told him to attack Iraq; He told a General the Muslims are Devils; He told my neighbor that I should make my dog stop barking and He talks to you about abortion. I wonder why God isn't telling Bush how to conduct the war? I wonder why God didn't whisper to Hastert about Foley. I wonder why God talks to Republicans who are so corrupt He seems to never talk to Democrats although they're religious people too. Maybe He does and the Democrats don't brag about it --I don't know.

Well, I'm in awe of you and my hat's off that you're in direct touch with God. Maybe He'll tell some of the men who rape to stop doing that to women. I'm sure some of those men are are Republicans. By the way, I wonder why the Republicans don't run on the amazing fact that God talks to all of them directly. That helped get Bush elected president. I'm surely impressed and I'll now vote Republican and muzzle my dog.

10:19,
God talked to me again. He sends his apologies for giving you such a puny brain.

I hope this helps you understand how you got where you are today.

10:19 OOPS. My puny brain was wrong to decide to vote Republican and muzzle my dog. Drat. I'll have to change my mind again and vote for the Democrats. Thanks for telling me what God told you. But I still don't understand why I'm in a country ruled by corrupt sinners which is where I am today.

12:09 No -- I don't agree with you that there's "someplace better" where I could go, so I just couldn't possibly leave. But what I can do is stop wasting my time with you It's become too boring and inane and frankly I'm embarrassed I got caught up in this silliness. Lesson learned.